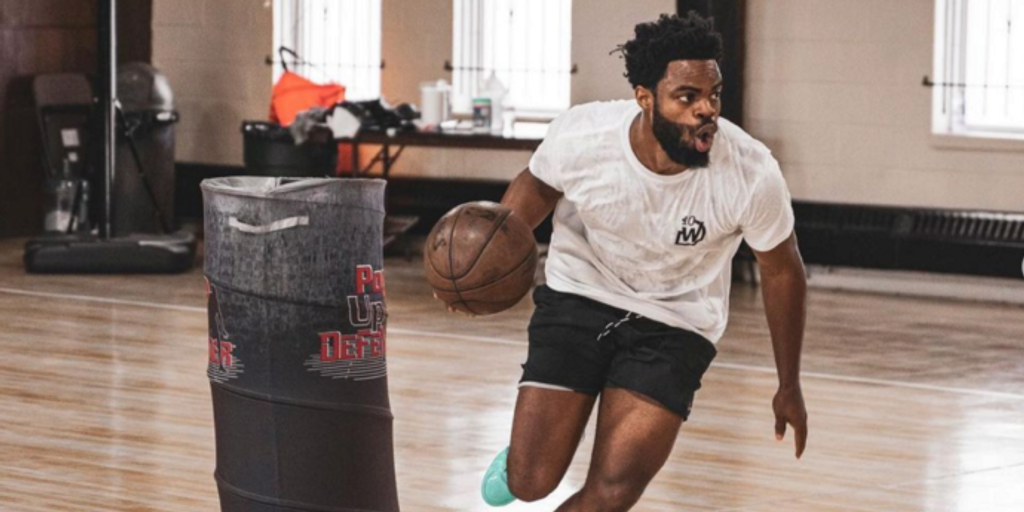 For the first time in his soon-to-be-six-year professional basketball career, Derrick Walton Jr. will not be suiting up for an NBA team come training camp. Instead, in three weeks, he will pack his bags and head to Australia, where he’ll begin to get acclimated with the Sydney Kings of the National Basketball League.

“It is new. I kinda came to grips with it probably about two weeks ago,” Walton told Basketball News in a phone interview. “This is different. I'm usually not really geared all the way up back until September or so. But it's a good setup, I have no complaints. Whatever the situation [or] the schedule is, just know I'mma go in with a wide smile and be ready to go for real.

“Overall, just the good things I've heard [from] a lot of people that have already experienced it and just the love that they showed me, I couldn't not acknowledge it. It was very prevalent, and [the Kings] put it on display. So [what I’m looking forward to] for the most part, just obviously the style of play, the lifestyle I've been told about and then just people that value me. And we've got a complete, good understanding, so [the decision] was kind of easy for me to be honest.”

Walton officially inked a one-year deal with the NBL’s reigning champions on July 4 after hearing nothing but good things about the Aussie league from people he’s close with and trusts.

R.J. Hunter, a former NBA first-round pick in 2015 by the Boston Celtics who played for Sydney last season, direct-messaged him a while ago about it. Friends from the Detroit area such as Brandon Jenkins and Walton’s longtime trainer, Jermaine Jackson, have also given the stamp of approval, while Louisville hero Peyton Siva has done the same.

Walton’s motivation to make the move across the world is simple, and not about boosting his stock just to get back to the NBA. He wants to be wanted.

“I think, being transparent, I feel like obviously I know I'm an NBA player. I feel like I would be a really good backup point guard. But at this point, I just want to go somewhere where I'm valued,” Walton said. “And if that comes back full circle, then I would take it. But as far as now, I want to just make sure I'm enjoying the game as much as possible, being in the best situation every single chance I get a chance to be and then overall, I let stuff take care of itself.

“I would be lying if I said that's not in my wheelhouse, that I wouldn't be drawn to that, but honestly when I go to Australia, that's my main priority. I don't really want to put my mind anywhere else."

This offseason has been all about staying in the gym to become “as dynamic as possible” for Walton, who has spent the majority of his career setting up others primarily first and foremost.

“Being a floor general is cool, but I think I'mma try to just be a little more diligent and trying to display how I can score the ball,” Walton said. “I've been working on that a lot more, just trying to be more aggressive for the most part."

"There's a time in some people's careers that they just go play. I mean, just go play. And I think being in Australia is going to give him that opportunity to just go run a team, 'cause he's as good as there is at running a team," Pistons senior player development advisor and former Michigan head coach John Beilein told Basketball News. "And he can analytically build up some stats that may make him very appealing as he comes back because he's still young. He did it in the G League and he really proved himself while in the G League.

"Roster spots are so rare. And so, he's gonna go over there [to Australia] and make the most of this opportunity. And who knows where it'll lead. It may lead to 10 more years overseas, or it may put him right back to the NBA in a stronger position."

Though forward-looking, Walton appreciates his time in the NBA. For him, being blessed enough to live out a dream he set out for himself as a child is something he is grateful for. Having had stints with the Orlando Magic, Miami Heat, Chicago Bulls, Los Angeles Clippers, Philadelphia 76ers and Detroit Pistons in different capacities, he appeared in 45 regular-season games and drew four starts. (He also averaged 15.9 points, 8.0 assists, 4.9 rebounds and 1.4 steals across 59 career games in the G League.)

"Everything comes with growing. The older I got and each time I dealt with a different situation, I handled it with a little more maturity,” Walton said. “Probably earlier in my career, I was a little more 'reactive,' but overall I just think I'm a very even-keeled guy for everything I've been through. So it's not too much that's gonna throw me off or knock me off my square now...

"...Be where your feet are and then just try to have as much fun with it. I know me, I'm a completely different player when I feel like the outside factors outside of the court [are] handled. So as much as I just get to focus on what I do on a day-to-day basis, I think my performance only rises. So that's what I pretty much learned for myself."

Three of those NBA starts came with his hometown Pistons last season between Dec. 26 and New Year's Day, when Walton amassed a total of 19 points, 21 assists and 7 blocks on a 10-day contract.

“It was dope,” Walton said of playing for his city. “My family, we all went to my mother's house to eat afterwards. That's a dope feeling. It more so was really dope for me to see my family get to experience it more so than myself, to be honest... As a Detroiter, we're just prideful of our city. I can say I'm prideful to be from here.

"It kinda made me who I am. They show me ridiculous love. And then, it's home. People love me here. It gave me love, so I show love back."

Having a familiar face around the franchise also helped with Beilein being in Detroit. Together, the pair won the Big Ten Tournament twice — Walton was the 2017 B1G Tourney MVP — and took home regular-season honors once too.

“[Michigan] pretty much allowed me to be a professional before I was,” Walton said. “Just how to carry myself, the edicate and overall just the ins and outs of being a pro every single day. “[John]’s a guy that knows my game in and out, so if he'd watch the game or anything, just the nuances or like little, small stuff... It was always good to just get back to home and just know a guy that had seen me at the very purity of the game with being collegiate, just knowing he got my best interest at heart was always dope. And then, we got a good relationship. We won a championship together, so it's always good to see somebody that you raised the banner with."

"There are so many moments with him," Beilein said. "He was the one, of all those guys (former Michigan point guards), I think we had the most fun. But it was also — we held each other accountable. He wouldn't let me get too programmed. And I wouldn't let him get away with anything but believing in himself and playing with great confidence."

Beilein outlines how amazing Walton played and led the Wolverines during that 2017 conference tourney, particularly after a frightening plane crash prior to takeoff on the way to Washington D.C.

"That should tell you everything you need to know about Derrick Walton. He's helping others get off the plane before he dove out the window and cut his knee (and got six stitches). And then, to get up the next day and lead us for four days of incredible basketball. [Everybody needs to see] how special he was for those four days," Beilein said.

"So there's times when leadership is taken for granted. That one was not what it was — like, so needed, and he knew it. And he stepped up. He was the best guard in the country for those four days without question. He did the same thing to Louisville, to Donovan Mitchell and people like this. We're playing [against] Louisville; [Walton] commanded that whole game, Oklahoma State, same thing. And then, we lost with real adversity at the buzzer with Oregon in the Sweet 16, so he put on a show there. That was incredible. And he's capable of doing that. He's so unselfish that he'll pass up shots that he can make. But everybody loves coaching him. I know Coach [Dwane] Casey loved coaching him. We won a game or two with him as our point guard last year."

Now, Walton is poised to hang another in Sydney with a squad looking for back-to-back NBL titles. Despite the new challenge, Walton is not worried about transitioning into a new league. He feels at this point of his career that he can get along with anybody when he makes the move to the Land Down Under.

“It's all about me just sitting and getting around the guys for probably days at a time. I'm an easy-going guy, man,” Walton said. “I'm a point guard first, I'm good with people. I'm not really too nervous about adjusting. It's just more so just trying to get down everyday life quick. It's not really a huge adjustment, just a different scenery for me I would just say."

(That change of environment also includes Australia’s large habitat of snakes, to which Walton will have to reluctantly get used to: “Wait what? They need to keep that away from me! Don’t put me near no snakes! Hell nah!”)

With so many players going to and from the NBL, Walton is eager to be the next transfer that makes a big impact.

“... Some situations like this one (that) presents itself, you just can't turn down. So it's like, everybody's situation is different and then, the basketball (competition level) being what it is always makes it better. But I think it's a good combination of both for me."