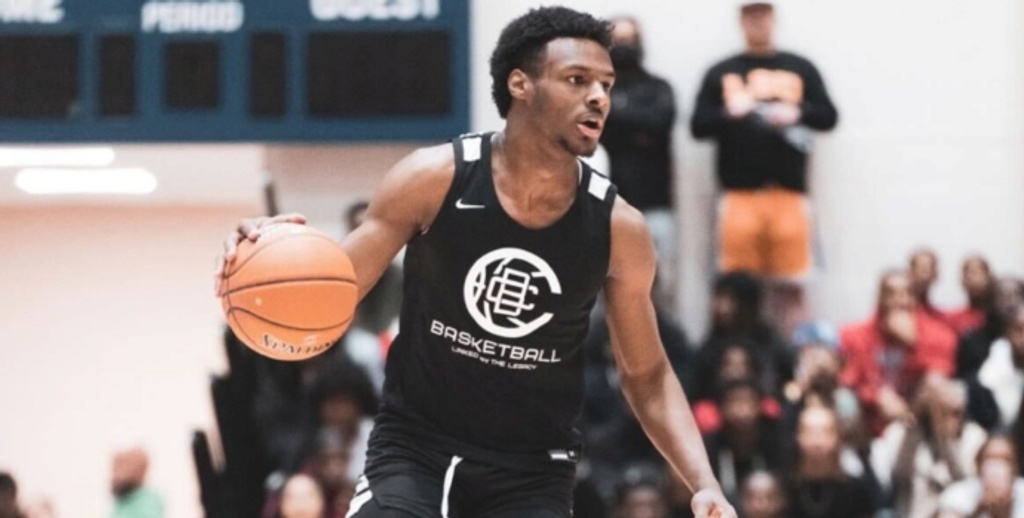 DeMatha was leading Sierra Canyon by almost double digits in the fourth quarter, but the Trailblazers were mounting a comeback and chipping away at the lead.

The electrified crowd was enthusiastically cheering on the hometown Stags. It felt like an NBA-playoff atmosphere.

Senior point guard Jaden Winston led a very balanced DeMatha attack with 10 points, but his real impact was felt on the defensive end where he harassed the Sierra Canyon backcourt the entire night. The guards were visibly uncomfortable, which at times led to them struggling to get into their offensive sets and contributed to Bronny James being held to 11 points on just two field-goals.

Ashton Hardaway, who led Sierra Canyon with 14 points, had a very impressive night scoring in a variety of ways —from fastbreak dunks to offensive putbacks. Down the stretch, he displayed great footwork with a mid-post move to a turnaround fade that brought "ooohs" and "aaaahs" from the DeMatha-heavy crowd.

Unfortunately, a crowd disturbance caused the game to be cancelled with less than two minutes to go in the fourth quarter. (DeMatha was leading 52-51 at the time the game was called).

Following the game, Rashid Ghazi, the president of Paragon Marketing Group, issued the following statement through social media: "Given the incident in the stands tonight during the CBC vs. Stags game at Wise High School, we have cancelled Sunday’s event. We are making the decision out of the utmost of caution to ensure player and fan safety. Refunds will be available via Go Fan."

I spoke to a group of teenage girls outside of the Wise High School gymnasium who were witnesses to what happened (including my daughter Imani Thomas) who told me:

“I was walking by the concession line when I just saw everyone start running. They were jumping down from the bleachers and stampeding toward the exit. I have never seen anything like this before. People were so scared; they looked like they were running for their lives, so I started running too. Not like I was going to ask anyone what happened or what was going on. I saw running so I ran.”

Another teenager added: “They should’ve had this at a bigger place, like where the Mystics play in Southeast. That’s a big arena, so you wouldn’t have had to have people all in the aisles and packed around the balcony. That was just a bad set up. Someone could’ve really gotten hurt.”

Another teenage girl passionately chimed in with, “This was all Sierra Canyon’s fault. They were so busy trying to protect Bronny, they caused all of this themselves. Nothing even happened. There was no fight, not even any punches were thrown. It was some young boys running off at the mouth at each other.”

One of Imani’s schoolmates added, “Hey, they gotta protect LeBron's son. They can’t be having him out here risking it all.”

Another girl responded: “Yeah, but them being all scared for no reason caused all this and it wasn’t even that serious. Nobody would’ve reacted if they didn’t see them start running for their lives off the court. Ain’t nobody gonna do nothing to Bronny. I wanted to see them finish the game and send them back to Cali with an L.”

Imani chimed back in with, “There were just way too many people in there in the first place. Wasn’t that a health-code violation or fire-marshall issue or something?”

They were all absolutely correct in their assessments.

From where I was standing in the overly-crowded balcony they were referring to, I could see everything and what I saw was two young kids who couldn’t have been any older than 6th or 7th grade start arguing with each other. Then, I saw security rush over toward them and everyone started to look up into the stands to see what was going on. I looked back onto the court and I saw Sierra Canyon literally running for their lives off of the court. What followed could only be described as complete panic and pandemonium. But as the teenager pointed out, this was 100% prompted by Sierra Canyon’s sprint off the court.

It’s a shame because it was an amazing display of basketball being played by both teams filled with highlights.

A three-pointer from freshman phenom Ashton Meeks after Jaden Winston makes the defender almost do the splits:

A rebound putback and-one by Malcolm Thomas brought the crowd to its feet:

A pull-up three-pointer by Bronny James:

Bronny James pull-up tonight for Sierra Canyon. @DeMathaHoops did a tremendous job on James defensively tonight. This was one of his buckets. pic.twitter.com/RoFwUmN7oq

But the play that brought the house down was made by DeMatha’s Chris McElveen. It’s a play that will be talked about in the DMV for quite sometime. A fastbreak dunk over Bronny James that almost caused the game to be paused in itself:

Bronny James and Sierra Canyon put on a show tonight at Wise before some unfortunate circumstances ended the game with 2 mins left and @DeMathaHoops up 1.

But many will remember this game because Chris McElveen (@iam_cris21) put one on Bronny’s head!!
😱😱😱😱 pic.twitter.com/CzYm5KHK45

Regardless of the unfortunate ending, this was a great display of basketball played in Prince George’s County on Saturday night. Yes, adjustments will have to be made the next time as suggested by the group of very astute and keenly aware teenage girls. But overall, the crowd definitely got their money’s worth (even if it was a hiked up $15 a pop for a preseason scrimmage game).

A few things impressed me with this play. The fact that Malcolm @princ3_thomas challenged Bronny up top (yes he did foul him but he also got a lot of the ball too) but the fact that he didn’t move out of the way and just allow the Bronny highlight #NoNo (Shout out to Mutumbo) pic.twitter.com/HK6fKMrSdg

Credit to Tariq Ali, who contributed the photo of Bronny James.