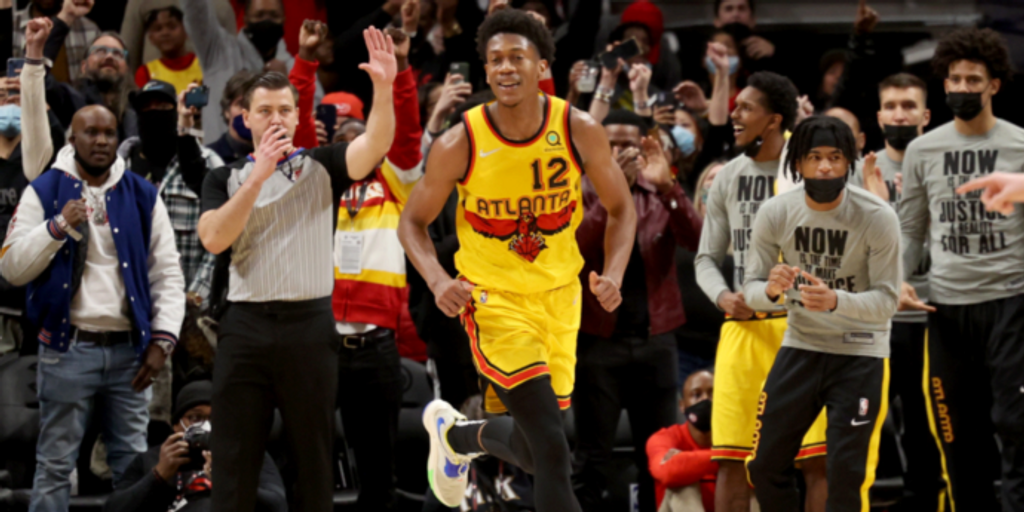 Fixate on one side of the ball with the Atlanta Hawks, and your perceptions will surely be distorted. Despite their 24-26 record (10th in the East), mediocrity won’t be evident. Instead, it coalesces as the midpoint of their extremes by way of a plus-0.2 net rating.

According to Cleaning The Glass, 24 spots separate their third-ranked offense and 27th-ranked defense. The drastic gulf between a prolific offense and futile defense isn’t approximated by another team around the league. Only five other teams have offensive and defensive rankings more than 15 spots apart, and none of them even eclipse an 18-spot difference.

Yet, in recent weeks, that unenviable gulf has been closing — thanks in part to the return of De’Andre Hunter. Since he re-entered the lineup 11 games ago, Atlanta sports the sixth-ranked offense, 16th-ranked defense and seventh-ranked Net Rating.

Narrow the parameters to six games — when Clint Capela returned after a 10-day absence — and the numbers are even rosier for Atlanta: eighth-best offense, fourth-best defense and third-best NET. Over that time, the Hawks have faced four of the Eastern Conference’s top-nine teams; Atlanta has wins over three of them, including the Miami Heat, who are mere percentage points behind the No. 1 seed.

Hunter is easily the club’s premier point-of-attack defender. Alongside Capela, his presence revolutionizes its pick-and-roll coverage. The big man is tasked with fewer responsibilities and 2-on-1 pickles because Hunter excels at wedging himself between ball-handlers and screeners to stay attached.

A ripple effect of Hunter’s presence is downshifting everyone else in the perimeter defense hierarchy. Kevin Huerter is a good perimeter defender, but not so much when tasked with stopping the other team’s top option. Empowering him to wrangle with secondary creators — a massive difference from primaries for most teams — or provide help at the nail, where he’s comfortable, is a much more optimal allocation of his talents.

Bogdan Bogdanovic was a pretty good perimeter defender last season, but has looked notably less spry laterally this year, often struggling as a result. But he can still apply his 6-foot-6 frame and 6-11 wingspan to win certain matchups, especially when the caliber of those matchups are simplified by his teammate’s ability to handle the cream of the crop.

On the ball, Hunter is physical, yet disciplined against fakes and sudden movements, as to heed against foul trouble. He proficiently flows around screens and frustrates opponents with his strength. Nobody else on the Hawks can consistently flummox All-Star creators like him.

The third clip of the above montage is emblematic of Hunter’s individual merits and how they pervade through the rest of the team. He stays within range of Jaylen Brown around the screen and allows Capela to lay back, neutralizing Robert Williams’ lob threat. Hunter sits on Brown’s left hip and funnels him to the middle, where Huerter is waiting in help and alters the pull-up jumper.

Yes, Marcus Smart is open on the wing and Brown taking that shot isn’t prudent. But good defenses eliminate primary choices for offenses, which is how that possession unfolded, led by Hunter not burdening everyone else with covering for his shortcomings.

Hunter's aptitude significantly reduces how frequently Atlanta is putting out fires caused by breakdowns at the point-of-attack. Help on drives, ball-screens and face-ups is less imperative. The defense isn’t routinely playing catch up. That’s always valuable, especially so on a team where the communication and coordination off the ball can be rather lackluster.

Expecting them to maintain a top-five defense over the final two-and-a-half months is probably too lofty, but a second-half run doesn’t necessitate it. With Trae Young at the helm, Atlanta's offense is potent enough that hovering around league average or a bit better can vault this team back near its 2020-21 form.

Hunter also offers the Hawks an avenue to diversify their scoring outside of Young’s brilliance. Before a recent four-game surge (hopefully, it’s a sign of things to come), Bogdanovic had failed to resemble the dynamite secondary handler of last season. Although Bogdanovic’s struggles weren’t burying the offense to non-elite levels, Hunter still fits snugly in and enhances the Young-led attack (so does Huerter, who’s cooking as a starter).

The third-year swingman has drilled 41.9% of his triples since returning, can attack off the catch and keenly migrates around the arc to open driving lanes, passing windows or space for jumpers.

Over this span, his pull-up has been clicking too, having canned 51.6% (16 of 31) of his off-the-dribble attempts. Young is a foremost advantage creator in the NBA. Through a bevy of ways, Hunter knows how to amplify that skill, and he’s exemplified it in recent weeks.

Operating next to a (justifiably) ball-dominant initiator like Young isn’t universally seamless for ancillary players. Yet, with decisiveness, mid-range touch and a torrid outside jumper, Hunter is thriving as an off-ball scorer right now.

Whether it be face-up touches or strength-fueled drives, he’s a budding mismatch scorer. The Hawks lack many guys who tout both the creation chops and size to punish seemingly advantageous assignments.

While Hunter's handle isn’t dexterous enough to flood pick-and-rolls, he’s also flashed capacity for the occasional ball-screen in proper settings. He’s refining his craft using screens, and the high release point on his jumper opens the door for some side pick-and-rolls.

Young’s greatness means those situations won’t be a focal point for Hunter in Atlanta. But still, this is a guy who doesn’t always need the table set to succeed and is exhibiting as much.

Many of the Hawks’ perimeter players force them to make concessions on one end of the floor. By fashioning surplus impact on both ends as of late, Hunter doesn’t. He’s been critical to their improved play, even if he’s not some perfect wing.

The Hawks' hopes of a sustainably credible perimeter defense hinge on Hunter, and he’s a distinct, malleable outlet offensively. Atlanta’s recent seven-game win streak wasn’t solely due to him, but there’s undoubtedly a correlation. Expect that to continue moving forward.