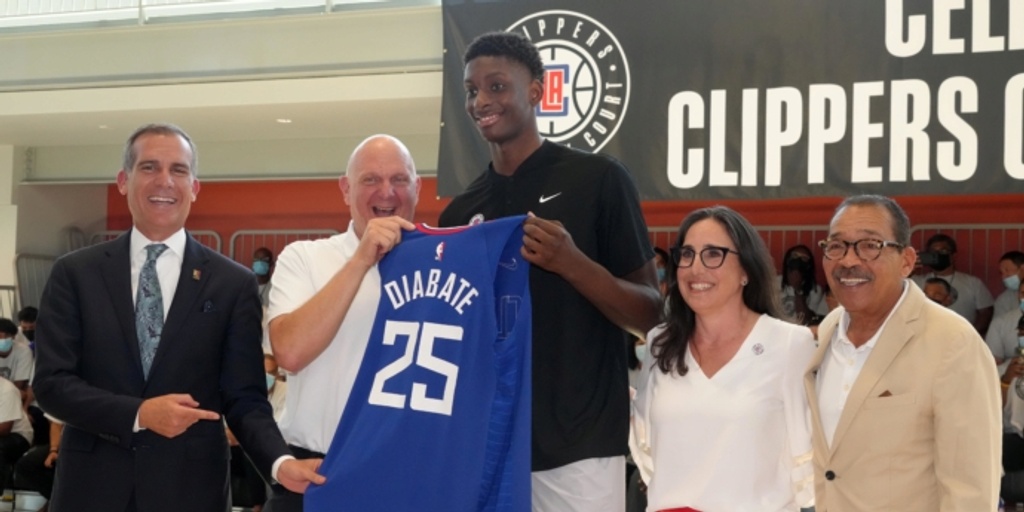 Clippers' Moussa Diabaté Q&A: 'There were a whole lot of sacrifices'

At 14 years old, Moussa Diabaté moved to the United States to take the next step in his basketball journey. This meant leaving his family and friends in France as he chased his NBA dream.

“Man, there were a whole lot of sacrifices," Diabaté told Basketball News. "I had to leave my country and my family pretty much when I was 14. That was a huge sacrifice that I believe not many people would make. And the friends that I had back home, all of those relationships that I made when I was younger, they pretty much disappeared because you aren’t on the same time as them no more. You’re playing basketball and trying to [chase your dream] and they’re living a regular life, so you don’t match anymore in what they like to do. That’s how you lose contact with people and stuff like that.

"Also, you can’t have distractions. When you’re a regular kid, you have more opportunities to do that, but as an athlete who’s trying to make something good out of it, you have to cut out all distractions. There have definitely been a whole lot of sacrifices, and all of the sacrifices come at home."

Diabaté’s sacrifices would ultimately pay off, as he became a five-star recruit and received offers from nearly every major program in the nation. He committed to Michigan over Kentucky, Memphis and Arizona among others.

As a freshman with the Wolverines, Diabaté averaged 9.0 points, 6.0 rebounds and 0.9 blocks, while shooting 54.2% from the field. After earning a spot on the Big Ten All-Freshman Team, Diabaté decided to enter the 2022 NBA Draft. The Los Angeles Clippers selected him with the No. 43 overall pick.

Basketball News caught up with Diabaté to discuss his draft-night experience, his skill set, his fit with the Clippers, which players he’s modeled his game after and much more.

How was your draft-night experience? Were there any surprises or did things go as you expected?

Moussa Diabaté: “Obviously, like every player, you probably kind of thought that you’d get picked a little bit higher. But at the end of the day, I kinda knew which teams were pretty much interested in me. Even though I didn’t know who was going to pick me, I still kinda knew who was pretty interested, so when you don’t get picked by one team, you’re like, ‘Okay, now this next team might pick me.’ But no, it was a great experience overall and I’m really excited and really happy about the Clippers picking me.”

It’s been a few days since the draft. At what point did it sink in that you’re an NBA player? Has it sunk in yet?

Diabaté: “I ain’t going to lie, I don’t even think it has sunk in yet. I don’t know what it is or when in my head I’m gonna go, ‘Okay, you’re an NBA player now.’ I don’t know! (laughs) I’m just gonna keep going through whatever, but nah [it hasn’t sunk in yet]. I was actually just thinking about that. But I just gotta keep working and keep getting better.”

How do you feel you fit with this Clippers team, and how excited are you to learn from guys like Kawhi Leonard, Paul George and John Wall among others?

Diabaté: “Man, I’m really excited. Super excited. I was able to work out there and see how they are; I didn’t see all of them, but some of my teammates have been coming in. It’s a blessing and I’m excited. At the end of the day, I’m a player that they don’t have on that team. I’m just excited to be here, really. And I just gotta keep going, keep working, and obviously learn from the greats.”

I recently interviewed Oklahoma City Thunder rookie Jaylin Williams, who’s joining a team where almost all of his teammates are age-23 or younger. On the Clippers, you have a lot of veteran teammates and the franchise is focused on winning now. What’s it like joining an older team, and what are you hoping to learn from those veterans?

Diabaté: “I think overall, it’s just learning how to win really. It sounds simple and everybody says it, but when you have players who have actually won and experienced that, I think you get to really find out what it takes. Especially the L.A.Clippers, they are really trying to build something and really make something happen, so it’s definitely a different type of environment – whereas a team like OKC, as you just said, maybe is not the same environment. Even though they obviously want to win too, it’s a different type of mood and environment all around. On the Clippers, with the players that I have around me, I just want to learn everything from them and take in little details.”

What is your message to Clippers fans, who may not be super familiar with your game yet?

Diabaté: “I don’t want to say too much, but just know: God willing, you’re going to reap the fruits of this [pick]. I’m going to give everything I have and put my all into that. So, hopefully, they’re gonna get something good out of this (laughs).”

A lot of players seem to want to play in Los Angeles — we see it all the time in free agency or when guys get bought out. That must be exciting, getting to play in L.A.

Diabaté: “It is, for sure. I actually didn’t have a [preferred city]; for me, it’s not like a really big deal because I’ve never really been into that. I don’t really care; it could’ve been Minnesota, Cleveland or Sacramento – it don’t really matter. For me, it was just about being able to get on a team and really try to get better from that point on. But obviously L.A. is amazing and the weather is great. And compared to Michigan, it’s definitely better (laughs).”

Who are some players that you’ve studied or modeled your game after over the years?

Diabaté: “Over the years, I’ll say a lot of Bam Adebayo, Pascal Siakam, Jaren Jackson Jr. and Kevin Garnett. Those are four players that I’ve really looked up to. I watch a little bit of everyone. Tim Thomas, I don’t know if you know him, but I watch a little bit of him. Serge Ibaka, I watch him from back when he was in OKC; that’s another big one. Just players like that – all-around big 4s and centers who are able to move their feet, guard on the perimeter, be versatile and make a two-way impact.”

I love the Tim Thomas shout-out. I feel like most 20-year-olds don’t know Tim Thomas, so props for that. I’m curious: How much has your game developed over the last few years?

Diabaté: “Oh man, I think my game has grown so much. If you talk to the people around me who have seen me play over the years, I think they’d tell you, ‘Moussa has changed a lot.’ From my freshman year of high school to my senior year in high school, and then from my senior year of high school to my first year at Michigan, it’s just been me getting better each and every day. And as time goes on, it’s like, ‘Oh ok, Moussa is different from how he was last year!’ But yeah man, hopefully I will be able to keep up at that pace!”

Making the NBA is obviously your dream come true, but it’s also your family’s dream. They’ve seen your journey and they’ve made sacrifices of their own too. How are they reacting to you joining the Clippers?

Diabaté: “My friends and family are super happy for me, man. It’s special for my family because they’ve never had any athletes in the family, I’m pretty much the first one, so it’s definitely been a big-time celebration. Also, my friends are so happy. Let’s just say: the path I took is one that nobody has taken before, so the fact that I’ve been able to make it to this point is just huge. It sets an example and not just for basketball. I think people are going to be able to look at me and go, ‘Okay, you don’t have to take the regular path to make it.’ When most players go through the system and take the regular route, you kinda know what’s going on. For me, there was this sense of [uncertainty], not knowing what was going to happen. Let’s just say that it was really, really… interesting. At the end of the day, I’ve learned a lot and hopefully that will keep helping me out.”

You mentioned the sacrifices you had to make. Do you think you had to grow up quicker than most kids your age?

Diabaté: “I definitely think so. Just being mature and knowing that there are certain things you can’t do, that’s a huge thing. I think that a lot of players have to grow up [fast] and, especially when you’re a five-star, it comes with responsibility. You just gotta make sure that you always ‘look good,’ kinda, in a way.”