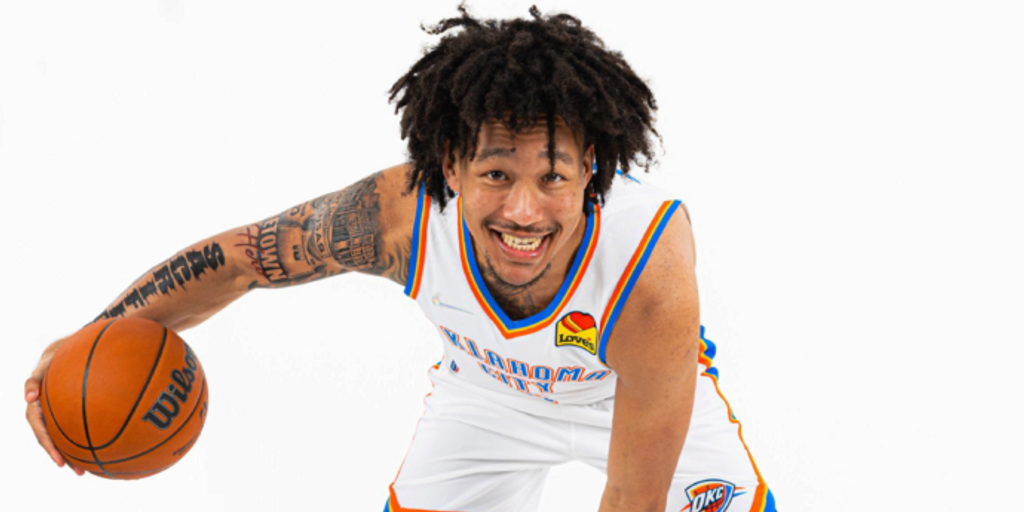 While the immediate reaction centered around the fact that Oklahoma City had drafted both Jaylin Williams and Jalen Williams (a guard from Santa Clara who went No. 12), the pick also marked the first time that a player of Vietnamese descent was drafted by an NBA team.

Basketball News caught up with Williams to discuss his game, his fit in Oklahoma City, the Thunder’s young core, teaming up with Jalen Williams, making history and more.

How was your draft-night experience? Did the evening go as expected or were there surprises?

Jaylin Williams: “It was great, honestly. I had a lot of my family there. We did it at my old high school in Fort Smith, Arkansas. My high school just built a new gym, so we used their JumboTron and everything they had there. I invited, like, 90 people, but because word got around and because I have so much family, we ended up having closer to 200 people there! But just having my whole family there with me and sharing that experience with them is something that I’ll never pass up on. I wouldn’t wish for anything else — that was the best thing that could’ve happened.”

How did you react when your name was called? Did you get emotional?

Williams: “My agent called me a little bit before [they announced the pick] and told me, ‘Hey, you’re up next. They’re going to take you with this pick.’ I tried to hold the emotion in, so I could just hear it and so everybody wouldn’t start going crazy. But I heard my name called, and it was crazy. It was just unreal. A mind-blowing sort of thing. It’s something you dream of your entire life — you dream of that moment and what it’ll be like to hear your name get called on that night. My emotions just started rolling, seeing my family so happy, seeing people cheering, looking at my dad and hugging him, hugging my mom and my brothers and sister. It was crazy for me.”

What do you think of your fit with the Thunder’s young core?

What was your first impression of Oklahoma City when you arrived there?

Williams: “Since I’m from Arkansas and it's not that far away, I’ve been to OKC before. My sister actually lives there. Honestly, it was crazy; people were already showing so much love to me and everybody was already being so welcoming — coming up to me and saying congrats and that they’re really happy I’m here. Honestly, it was just so great sharing that time with the other rookies and meeting the staff and talking to everybody there. It was great.”

How is your sister reacting? She must be happy to have you in OKC.

Williams: “She’s excited, for sure. She actually doesn’t live too far from the facilities, and my nephew and niece live there too. My nephew is a basketball player, and I’m really happy that I got picked there because I think it’ll give my nephew another bit of motivation.”

now y'all can use the legit photo 😅😂 pic.twitter.com/Ggw6AIy6hJ

I love that you and Jalen Williams ended up on the same team, and I think it’s hilarious that you guys recreated the Spider-Man meme.

Williams: “We kinda were talking about it and then when we both got drafted that night, we were getting tagged in a bunch of posts like, ‘Jalen Williams and Jaylin Williams!’ Then, when we saw each other, we talked about it a little bit and clarified what we’re going to call each other and what we want everybody else to call us so they don’t get mixed up (Jalen is J-Dub and Jaylin is J-Will). We put our jerseys on and they were taking photos and we were just kinda like, ‘Let’s do it! That’s funny, let’s have fun!’ [Recreating the Spider-Man meme] was a fun thing to do.”

You guys were getting mixed up during the pre-draft process too, so this isn’t a new thing for you guys. This was happening even before you ended up on the same team, right?

You’re the first player of Vietnamese descent to be drafted in NBA history. What does it mean to you to blaze that trail?

Williams: “Honestly, it’s amazing. I didn’t know that I was going to be first until a couple weeks before the draft. It’s honestly crazy, with how long the NBA has been around and how big it is over there. Just the love that I’ve gotten from Vietnam and people who are supporting me from that area, it’s crazy.”

What’s your message for Thunder fans ahead of next season? 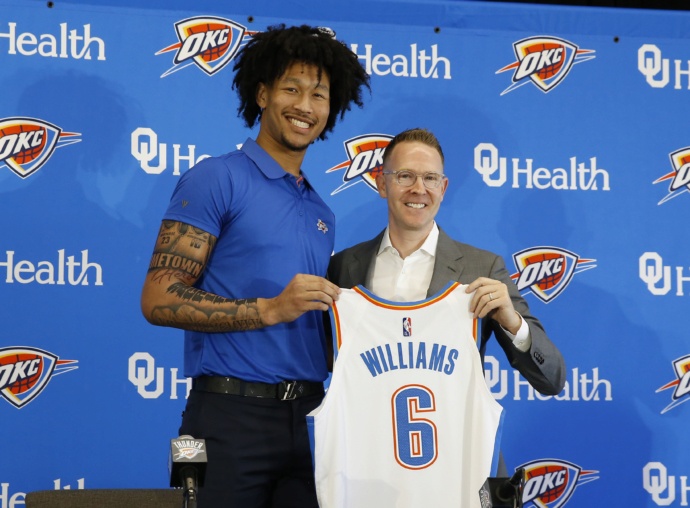 Williams: “Yeah, it’s cool, for sure, just knowing that I’m going in there with a lot of guys and we’re all learning together. I know there are some older guys and I’m probably one of the youngest on the team, but we’re all going to be in there learning together. But I’m going to respect those guys like they’re vets. I gotta go in there and be willing to learn from them, and I’m gonna take in as much information as I can from all of those guys.”

You’ll be playing with Chet Holmgren going forward. What are your thoughts on his game and the opportunity to team up with the No. 2 overall pick?

During the pre-draft process, some experts compared you to fellow Arkansas alumni Bobby Portis. Have you talked to Bobby and gotten any advice from him?

Williams: “I’ve talked to him a little bit throughout this process. He gave me some tips about going through it and told me good luck and said that I’ll see him around. Then, I saw him at the Combine and we dapped it up, and he was just like, ‘Good luck, bro!’ He’s been very helpful throughout this whole thing and has been very supportive.”

Williams: “I can see the similarities, for sure. He came into the league as a guy that plays hard and scores in the post, and then his game just developed. For that Milwaukee team, he’s their energy, he’s a hustler, he [helps] their rebounding, he plays his role — and he’s great in his role. I can definitely see the similarities.”

Who are some players that you’ve studied or modeled your game after?

I’ve talked to NBA veterans who say they are so glad they never have to go through the pre-draft process again because it’s exhausting. It’s a ton of traveling and intense workouts. What was it like going through that process?

Williams: “It was just a lot of moving around and a lot of uncertainty. That’s probably one of the hardest parts about it, not knowing where you’re going to end up, not knowing where you’re going to get drafted and not knowing what’s going to happen. That’s one of the hardest things about it, and it’s honestly a really stressful time. But for me, it’s something that I’ve dreamed about and it’s just part of the process. When I see my goal that close to me, I’ll do whatever it takes, so it wasn’t that bad, honestly.”