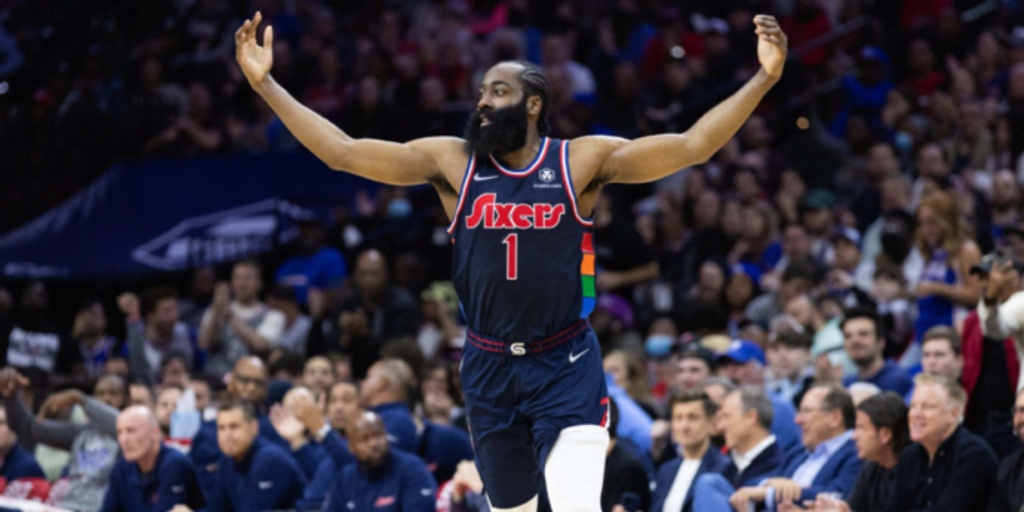 The truth about 'player empowerment' in the NBA

From a mid-season blockbuster swap involving two disgruntled stars, to rumors that a former No. 1 overall pick wants a change of scenery in only his third season, the topic of player empowerment is front and center in the NBA.

Superstars wanting off their team isn't a new concept. Kareem Abdul-Jabbar forced a trade from the Milwaukee Bucks to the Los Angeles Lakers in 1975. In recent years, superstars demanding to be dealt is so common that the term “player empowerment” established itself in our NBA lexicon.

But this season feels different, in that it is rife with unique trade demands. Like Ben Simmons' refusal to play a single minute for the Philadelphia 76ers while requesting a trade, with a whopping four years left on his contract. Or James Harden asking off of his second team in as many years. Even the Zion Williamson situation — rumored to be disgruntled in New Orleans after playing a total of 85 games — is unprecedented. With every new trade demand, it feels like stars are pushing the limits and boundaries of player empowerment.

Either the NBA's Mercury is in retrograde or we’re witnessing the dawn of a new era.

“Player empowerment” was popularized in 2010 after LeBron James, Dwyane Wade and Chris Bosh conspired to play with each other in Miami. Suddenly, players realized they could control their own destiny and team up to form super-teams.

Since then, player empowerment has largely come to mean trade demands from superstars.

Many executives have decried it as ruining the league's parity and even the sanctity of the game.

"Player empowerment is a catchall for the fact that the league has done a terrible job of empowering teams, the players have all of the leverage in every situation. I think it's the worst thing that ever happened to professional sports on all levels," an anonymous NBA general manager told Isaac Chotiner of The New Yorker.

Many fans view it as a win for laborers.

The NBA is, after all, the most progressive sports league. However, without even touching the racial undertones that weave throughout the narrative about the league, it is easy to see why the masses support the players. Fans have watched players lose the battle over the means of production — from owning 57% of league revenue in 2005 down to only 50% today — so witnessing players gain autonomy over their playing career by stripping control from owners is celebrated as a nice consolation prize.

As we become inundated with debate over the merits of player empowerment, we’ve seemed to skip over what the term actually means and how it actualizes itself in the league.

There is no denying that some players have power and some of those players have controlled the make-up of the league for over a decade. The issue is that player empowerment is a term that poses as the league's players uniting, but instead, it is merely a select few exercising their power over everyone else.

Let’s break this down.

Framing the whims of a small few that can disrupt the lives of many as player empowerment feels disingenuous. A better term would be “superstar entitlement.”

With the knowledge that player empowerment really means superstar entitlement, it’s easy to understand how empowerment stories are often framed as prima donnas throwing tantrums until they get their way.

But maybe it should be framed as superstars earning power through loss of salary.

With the advent of max salaries, stars are never fairly compensated. The bigger and brighter the star shines, the more they lose out — with their play forever eclipsing the money they make. Ergo, player empowerment is less about empowering all or even most players and more about compensating superstars in a salary-cap league.

Heliocentric is another popular term in our NBA vernacular; we’ve heard the term “heliocentric offense,” and we’ve heard stars described as heliocentric. But it’s also a term that can refer to the league itself.

To briefly go back to the 1500s and Copernicus — heliocentrism is a cosmological theory that the Earth and planets revolve around the sun. And in the NBA, everything revolves around certain stars. The bigger and brighter the star, the stronger their gravitational pull — the LeBronicus Theory, if you will.

Superstars wield more power than ever. They influence nearly every aspect of an organization — from coaching hirings and firings, to player personnel and roster construction.

The Harden-for-Simmons swap is an interesting case to dissect, because it centers around two stars whom everything doesn’t revolve around.

On one side, there’s Harden, whose status as a heliocentric star diminished as soon as he left Houston for Brooklyn. And on the other side is Simmons, a player who could never cement himself into anything more than a secondary star in Philadelphia.

Though both players had leverage, Harden had more because of the status of his contract. Neither were in a place to force their teams to bend to their will — at least not in the same way Harden was able to back when he told Houston they had a problem.

In Brooklyn, Harden reportedly never voiced his desire to leave, and 76ers president of basketball operations Daryl Morey threatened to hold out on trading Simmons for the duration of his contract.

"You're going to think I'm kidding, I'm not. This could [go on for] four years... We're in the prime of Joel's career... Either Ben Simmons is playing for us, or we have to get back a difference-maker," Morey said.

Morey on his timeline: "You're going to think I'm kidding, I'm not. This could (go on for) 4 years. ... We're in the prime of Joel's career...Either Ben Simmons is playing for us, or we have to get back a difference maker."

It wasn't Simmons' refusal to play games or Harden’s pouting that forced their teams’ hands.
It was that Embiid’s play pressured Morey to make a deal, and Kevin Durant reportedly wanted one too.

Ultimately, the deal came down to what was best for the biggest stars. While James and Ben were the players who used their leverage to request out, Durant and Embiid — being the heliocentric star of their respective teams — made the final call. 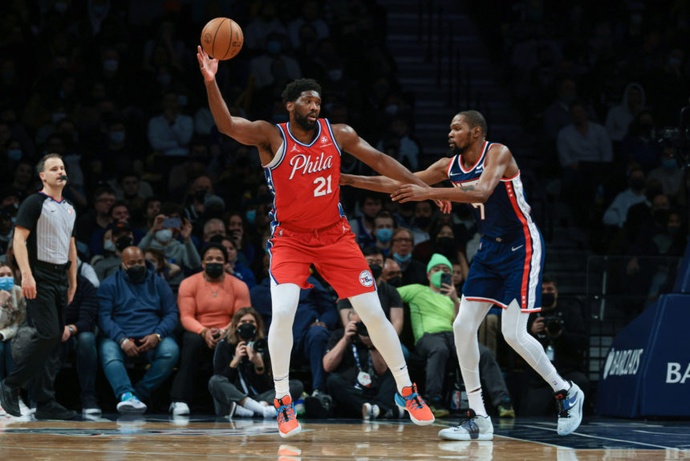 What Harden lost in star power in moving to Brooklyn, KD gained by doing the same. Though Durant’s play has always been stellar, it’s clear he has more power within the Nets' organization than he did with the Warriors. It was Durant, after all, who reportedly requested Kyrie Irving be allowed to play road games despite the stance Sean Marks and the Nets took earlier in the season.

Who has power and how much they have is determined by a number of variables, like their standing in the league, their standing on their team, their health, the length of their contract and market size, etc. And this list of powerful players is still arguably fewer than 10 names long in any given season (with some variance).

The variables at play that make Durant’s star shine brighter with the Nets than with the Warriors are as simple as the fact that there's another superstar in Golden State — and he was there first and couldn’t be eclipsed.

Of course there are titans like LeBron James, who can completely shift the paradigm of the league with a flippant comment — like over All-Star Weekend when he hinted at a possible return to Cleveland.

“The door’s not closed on that…  I’m not saying I’m coming back and playing, I don’t know. I don’t know what my future holds. I don’t even know when I’m free.” James told The Athletic.

LeBron is back in Cleveland this weekend. His picture is on the building again. At first he said he hasn’t thought about returning to play for the Cavs, but then we kept talking.

“The door’s not closed on that,” he said.

LeBron had a lot to say today. https://t.co/cdg8RIoxZb

LeBron’s comments dominated the news cycle over the league’s busiest weekend, and that's in large part because he will be a free agent in 2023. James signs short-term deals to maximize his leverage even though it means leaving long-term NBA money on the table.

Take for example the 2017 CBA. Superstar and NBPA president Chris Paul managed to help push forward the NBA supermax deal, given to players who have either won an MVP award, a Defensive Player of the Year award or earned an All-NBA selection in the previous season — or two of the previous three. The NBA supermax allows these stars to earn massive five-year deals with a starting salary of up to 35% of the cap.

Paul also helped change the "over-36" rule that prevented players from signing multi-year deals if they are to turn 36 or older over the course of the contract to "over-38." Not lost on anyone, Paul was set to be a free agent the summer of 2017, and pushing the rule back two years would have positively affected how much and how long he could have signed for.

Now, let's take a look at punishments. More often than not, disciplinary action comes in the form of fines. Technical fouls, for example, come with a fine of $2,000 for a player’s first five offenses.

On Jan. 25 this season, the Sixers faced the New Orleans Pelicans. Embiid and rookie Jose Alvarado got into it and were each assessed technical fouls. That means Alvarado, who earns $462,629 this season, and Embiid, who's making $31.58 million, are meant to pay the same amount. Though Embiid generously offered to cover the fine for Alvarado, the benevolence of stars shouldn’t make up for this obvious imbalance.

Fines are meant to disincentivize players from committing offenses, but when by setting these as a specific dollar amount as opposed to a percentage of their salary, they disproportionately hurt the lowest earners. And consequently, they allow the elite to do as they please.

Calling out NBA officials comes with a hefty $25,000 fine — this would be astronomical to rookies like Alvarado, but not to a superstar like Embiid who has been fined for doing just that. In Feb. 2019, Embiid told reporters the "referees f**king sucked" after a missed call in a close loss to the Boston Celtics. Though the fine undoubtedly hurt his pocketbook, it was a calculated risk he and other high earners like him have the freedom of taking.

From afar, superstar entitlement looks like stars picking their teams; a closer look unveils real inequities like financial penalties and disproportionate representation at the top of the players' union. A more granular look reveals that every scenario and every superstar is unique.

There is, however, one constant amidst the chaos in understanding power dynamics in the league, and that’s team control. The NBA draft, rookie contracts, restricted free agency and good old-fashioned trades are just some of the ways in which teams have maintained ultimate control. The difference is when teams wield their power, it’s not much of a news story.

We clutch our pearls at Kawhi Leonard demanding a trade but not at the Raptors for sending out DeMar DeRozan. We expect teams to make moves to better their situation, yet players who have become brands in their own right aren’t given the freedom to do the same.

Any team would be over the moon to have a superstar play for them — we recognize this and they recognize this. So, they aren’t going to sit back and wish upon a star for a trade. They ask, and if they're good enough, teams will acquiesce. It is a star-driven league, after all. So, we can’t be surprised at who's steering the ship. And I’d argue it’s high time for the rest of the league to just grab on to their seats and hold on, because the era of player empowerment has only started taking off.