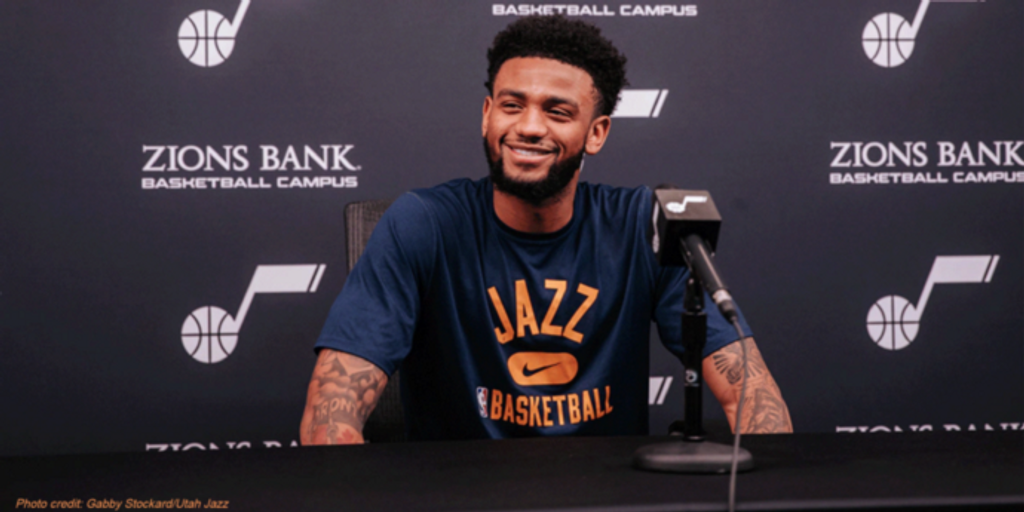 Why the Jazz should lean into Nickeil Alexander-Walker's limitations

The Utah Jazz have struggled with injury, teammate malcontent in the media and a porous defense (19th since the new year, per Cleaning the Glass) since the turn of the calendar. Donovan Mitchell has returned, helping to spark Utah's thus-far-undefeated February, but the problems that have persisted for multiple seasons loom large as the playoffs inch closer.

Prior to the NBA trade deadline last Thursday, the Jazz made their only in-season trade of the year, acquiring Nickeil Alexander-Walker as a part of a three-team deal with the Portland Trail Blazers and San Antonio Spurs.

The Jazz really only had the flexibility to make one or two moves, as they're fairly locked into their roster with contention in mind. While Joe Ingles' season-ending injury likely impacted his trade value, the point stands that Utah's singular trade was relatively confusing.

Alexander-Walker is an intriguing prospect — one that I hold in high regard — but he is not currently a player who routinely contributes positive on-court impact. In a vacuum, I love the Jazz adding a young player with upside to an aged roster (third-highest average-aged team prior to the trade). But, this is a squad that needs to make a deep run this season. They can't afford another second-round out organizationally, and recent reporting and rumblings further that notion — specifically this from ESPN's Brian Windhorst on the Hoop Collective.

"Donovan and Gobert, even though they're both under long-term contract, are under each other's skin. There's all kind of subtweeting and passive aggressive stuff going on."

(Editor's Note: Mitchell has since denied that report. "No, no, no, no, no. We’re good,” Mitchell said via The Salt Lake Tribune's Eric Walden. “I saw that [report] coming in this morning. Nah, we’re good. That’s just not true. Blatantly not true at all. We’ve never had this stretch of losses in a row, so now’s the time for all these things to come out, I guess. But it’s like, ‘C’mon, bro.’ Nah, we’re good.”)

The Jazz ideally needed a wing or combo forward who could defend at the point of attack and not muck up the offense. Alexander-Walker is a combo guard who can spend time on the wing for sure, but is much more of a big guard than a wing due to some of his physical attributes and style of play.

Can he adapt his game to fill the gaps for Utah this season?

Alexander-Walker had a 24.9% usage rate in New Orleans this season (24% for his career), which would rank third in Utah's regular rotation; I'd be shocked if that carries over even remotely with the Jazz. Given how reliant Utah is on bending the defense initially and then continuous ball movement, there isn't a ton of wiggle room for another shot-creator.

This is where the fit gets wonky.

Does Utah view him as a player who can become a connective, toolsy wing? Because I have questions if so! NAW hasn't been close to that role since his freshman year at Virginia Tech, the lowest-usage season in his last half-decade of basketball.

Offensively, he's much closer to Jordan Clarkson than Royce O'Neale.

He had a stretch last season that was easily the brightest of his career, showcasing the blueprint of his future offensive success. From March 21 to April 2 (7 games), he started for the New Orleans Pelicans and averaged 18.9 points, 5.4 rebounds and 2.7 assists on 55.8% True Shooting. While the numbers were impressive, the on-court calculus to get there was telling.

Alexander-Walker really lacks much burst, so even with a hard closeout, creating separation can be an adventure.

During that aforementioned stretch, he was GUNNING from deep, which opened up cleaner driving lanes. That goes without mentioning that Zion Williamson played the majority of that stretch, and Alexander-Walker — as well as every other player in New Orleans — really missed Zion Williamson's gravity offensively.

At his best, he's using his length and handle to his advantage, crafting his way to floaters, touch shots and extension finishes.

His below-the-rim nature can really cause problems for him at the rim as well. Even with a good break or separation on the ball, any contact or obstacle around the rim can throw him off.

The path forward for him is ideally through quality shooting (he'll have much better looks in Utah), but finding ways to lean into his limitations rather than fight against them is easier said than done.

In all honesty, getting to the rim less may be better for him. His herky-jerky style and lack of balance at the moment lead to really difficult restricted area attempts; using his handle and honing in on playing at his pace and focusing on creating paint touches with guile seem like the most ideal ways for him to find efficiency.

It sounds counter-intuitive to lean into a harder shot profile, but it's the profile that's most available and benficial to NAW's game at the moment. The off-kilter rim drives can lead to some really rough turnovers and bailout grenade passes. He feels so sped up even though he's often the slowest player on the court.

I really want to see Utah's development staff drive him towards playing weird, because by all accounts, that's what Alexander-Walker is built for!

Defensively, the fit is better, but it's kind of like if you asked your school nurse for a band-aid and they gave you an Advil instead. It helps, but dude, you still need a band-aid to stop the bleeding.

The Jazz are in desperate need of better defense at the point of attack and on bigger wings, which is far from NAW's calling card.

Bigger wings and forwards are not only unbothered by NAW, but easily shed him with any sort of power move. His high center of gravity is his nemesis on both ends of the hardwood.

I really enjoy Alexander-Walker's off-ball instincts and activity, but he has a tendency to overplay his hand and overhelp, leading to some off-kilter (a theme) close-outs. However, when he's able to use his length and crowd guards or smaller wings, he's adept at shading them to the rim. Giving ground isn't great, but if you have to, send the ball to help.

Rudy Gobert is, uh, easily the best rim-protector and defensive player that NAW has ever played with. Merely staying solid on defense, making clean rotations, and slowing the ball even if not fully stopping it will help Utah's defense.

In a vacuum, I really like this trade for Utah. Taking a swing on a young player with intriguing flashes in need of a new environment is a fantastic idea. However, for a team that needed to refurbish its defensive identity and further cement itself as a true contender, the trade is confusing.

Nickeil Alexander-Walker should factor into the Jazz's main rotation, but barring significant change, it seems unlikely he makes a massive difference for them in the season when they arguably will need it most.