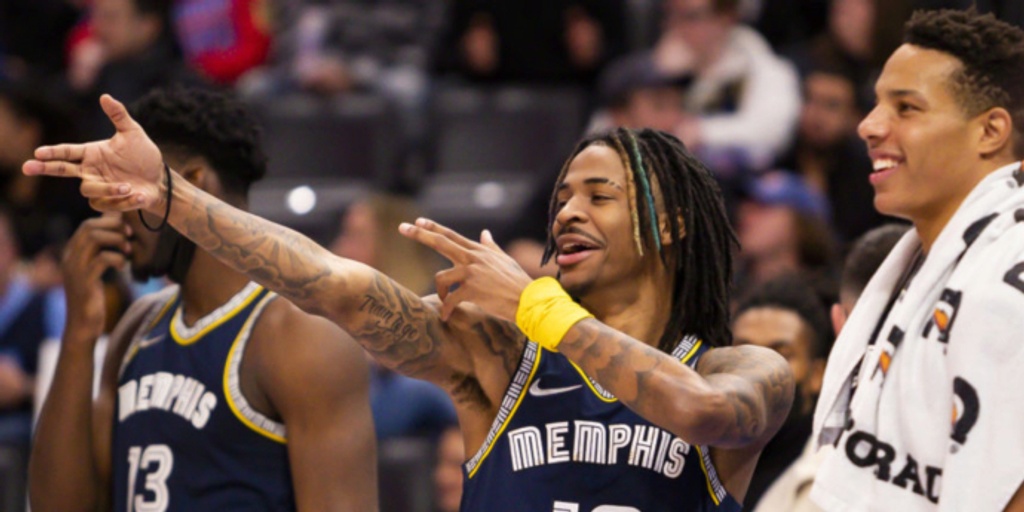 Welcome to the Dark: The Memphis Grizzlies' development story

The construction of an NBA roster is a puzzle for each front office to put together, but at the end of each season, only one franchise ultimately finishes the puzzle successfully — only to start over again the following summer. Sure, some teams may feel they have all the pieces on the table and someone was injured or unavailable, but most teams find themselves looking for the missing puzzle piece that they just can't find in the heap of pieces available.

Every franchise also has their own approach to team building. The Lakers, for instance, rely on the draw of living in Los Angeles and the allure of past success and legendary predecessors. The Pelicans shipped off their stars in exchange for assets in hopes of building something special, while the Nets and Mavericks have mortgaged their futures in exchange for star players.

Then, there are teams like San Antonio, who has a system and culture in place that the front office has stuck with and followed for years. Their talent evaluation and drafting has been superb for the better part of two decades. Couple that with having one of the best basketball coaches of all-time, and you become relevant for a long, long time.

The small markets need to have a combination of exquisite team building and pure dumb luck with ping pong balls. Milwaukee correctly identified Giannis Antetokounmpo and put the proper pieces around him. Portland struck gold with Damian Lillard and CJ McCollum, just as Oklahoma City did with Russell Westbrook and Kevin Durant, but they struggled to fit all the pieces together.

After the debacle that was selecting Hasheem Thabeet over guys like Stephen Curry and James Harden, the basketball gods smiled on the Grizz, allowing them to take Ja Morant with the No. 2 overall pick in the 2019 NBA Draft, despite having the eighth-best odds to secure that selection.

The year before that, Memphis was gifted Jaren Jackson Jr. as the Kings whiffed on Marvin Bagley over Luka Doncic and Trae Young. After seven-straight years in the playoffs, the Grizzlies parted ways with the Grit N' Grind era as Zach Randolph, Tony Allen, Marc Gasol and Mike Conley all moved on, ushering in Grizz: NextGen.

Very few teams can have a seven-year run of success, move on from the entire core responsible for the success, and be better than they ever were — all in just four seasons. The Suns just ended a 10-year playoff drought with last season's NBA Finals trip, while the Kings are still spiraling on a 15-year run of not making the playoffs.

Fortune has played a role. Who knows what this team would look like today if Morant had not fallen into the team's collective lap. However, fortune must be accompanied by a plan, and the plan in Memphis has been nothing short of remarkable.

Before this current front office took over, Memphis took a massive swing in free agency in an attempt to find that final puzzle piece, signing Chandler Parsons to a four-year, $100 million contract. Despite Parsons' knee issues, it was the risk Memphis general manager Chris Wallace felt he had to take, being the smallest market in the NBA and hardly an attractive free-agent destination.

New GM Zach Kleiman has taken a different approach. The front office has identified a type of player they want to be a part of this franchise, and they go out and get them. From Desmond Bane and Brandon Clarke to Xavier Tillman and Killian Tillie, the Grizzlies aren't interested in draft narratives about age and wingspan — rather, it's all about what kind of person and player is coming aboard.

From Morant down to the Memphis Hustle in the G League, the Grizzlies organization is deep. It could perhaps be the deepest team in the league, indicated by their 10-2 record when Morant was out due to injury this season.

They didn't trade seven first-round picks and pick swaps for a superstar. They didn't break the bank for a free agent. No, the Memphis Grizzlies drafted the right guys, snagged guys in trades (like De'Anthony Melton and Steven Adams), and signed Tyus Jones in free agency. They got their guys, they executed their plan. Now, for the plan to work, the players must do the same.

welcome to the dark ðŸ¥·ðŸ½

"Welcome to the Dark." That has been Morant's mantra all season. The dark was the offseason work he put in when no one was watching. But Ja also knows who is and isn't watching. 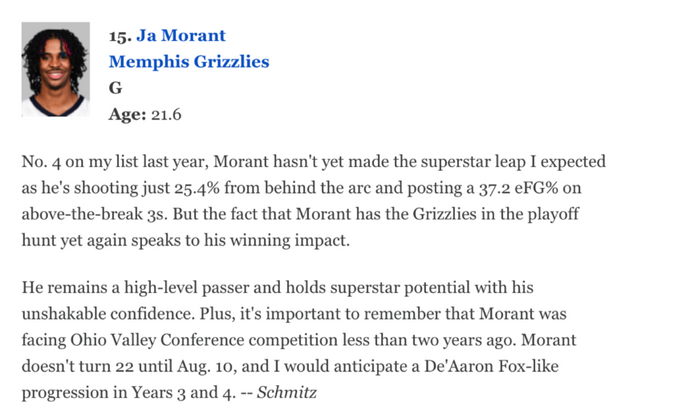 If you know Ja, you know he read this and took it personally. Being ranked the 15th-best player under the age of 25 is not something he is likely to ignore. Morant takes the court on a nightly basis to prove that he is "a top-five point guard in the league," as he's said. He has left little doubt where he stands, and the 22-year-old has taken the league by storm.

But the dark didn't apply to just Ja. The Grizzlies have developed from within. Look at the statistical jump that key contributors have made from last season to now:

These three players have come together to form the Grizzlies' new core for years to come. Jackson has already inked his rookie extension, with Morant due to sign his max deal this summer, followed by Bane's extension the following year.

The improvement and massive leaps by these three is accompanied by Clarke's return to his rookie form, as well as the steadiness of Jones and Adams. Now, headed into this offseason, Memphis has created the ability to take a massive swing with a trade, all while Morant has made Memphis a potential free-agent destination.

Kleiman has been the middle man in some deals, such the Andre Iguodala acquisition and subsequent moves — he has also gained assets in trades involving players the front office doesn't view as long-term fits with the team. Memphis got Utah's 2022 first-round pick for Mike Conley and the Lakers' protected 2022 first-round pick, sending Jonas Valanciunas to New Orleans. With those assets, plus expiring deals and future expiring deals in Adams and Dillon Brooks, the Grizzlies have set themselves up with a slew of assets to find their final piece.

The development of Bane eliminates the hunt for someone like Bradley Beal. The development of JJJ removed Memphis from a Domas Sabonis sweepstakes at the deadline. The development of Melton turns him into a trade asset. So whether it is trading the draft capital and few of the young, developed pieces for a star on the wing this offseason, or shopping the free-agent market in 2023, Memphis has done it their way, and so far it's working.