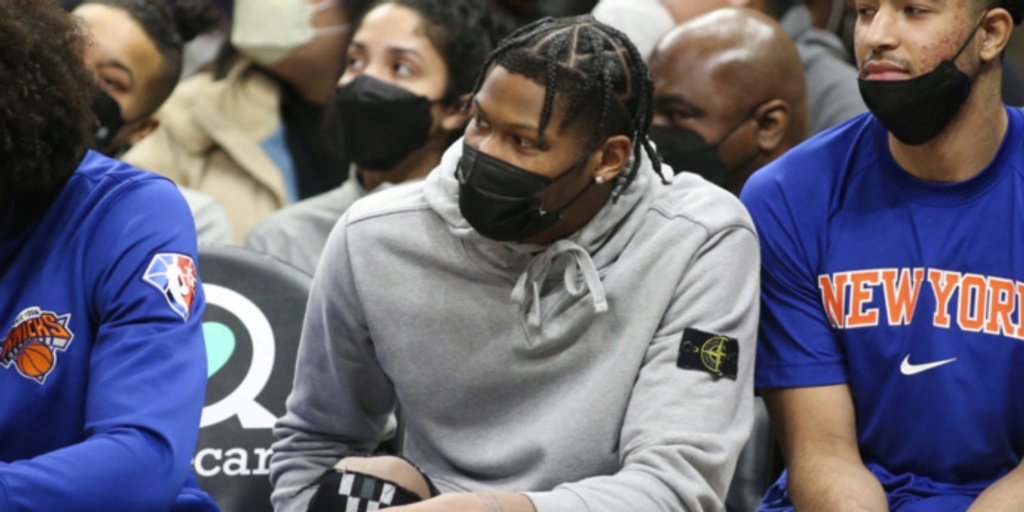 Judging by their past three games, the New York Knicks could definitely use some help.

Perhaps newly acquired Cam Reddish will be able to provide some.

Prior to Thursday night's contest against the visiting New Orleans Pelicans, Knicks head coach Tom Thibodeau was asked about the newest Knick and whether he would soon be ready to debut for the club.

It would seem so.

“Pretty close,’’ Thibodeau said when asked where Reddish is with respect to his debut, according to the New York Post. “He’s moving around pretty good. Should be any day now.’’

His arrival couldn’t come at a better time.

With Thursday night’s loss, the Knicks have dropped to 0-3 on their current four-game homestand and sport a record of 22-24 — good for 11th in the Eastern Conference. Even worse is the fact that, in those three losses, the club looked listless and uninterested. It’s become an alarming trend for a team that entered the season with high hopes.

En route to dropping a 102-91 decision to New Orleans, the Knicks fell behind by as many as 25 points, and could have certainly used another player who could create plays off the dribble and perhaps help his teammates find easier scoring opportunities. In some ways, it’s easy to see how Reddish might have helped. But with Cam unavailable, Thibodeau ended up sticking with his reserves down the stretch.

The third-year swingman was acquired from the Atlanta Hawks on Jan. 13 in exchange for Kevin Knox and a future conditional first-round draft pick, but he is yet to make his debut due to an ankle injury. Still considered to have loads of untapped potential, after being selected with the 10th overall pick in the 2019 NBA Draft, Reddish showed some promise in his first two seasons, but had to compete with many other talented players at his position for minutes.

In New York, he might not have that problem — especially considering the extent to which Thibodeau has been impressed by what he’s seen so far.

“He’s learning what we’re doing, so that takes a little time,” Thibodeau said of the 22-year-old. “We love his size. He’s been terrific. He comes in early. He studies. He works hard. So, he’s doing all the right things, which is the first step.’’

There is a belief that Reddish may make his debut when the Knicks complete their home stand in a Sunday matinee against the Los Angeles Clippers. At this point of the season, few would have thought that New York would be looking for a shot in the arm that can help to change the team’s fortunes, but that’s the opportunity that now presents itself to the former Duke Blue Devil.

Aside from being RJ Barrett’s teammate at the collegiate level, Reddish has had some flashes of brilliance. As we approach the All-Star break, the Knicks are hoping he can replicate the success he had during last year's Eastern Conference Finals. In his four-game postseason run — which got started late thanks to an Achilles injury — Reddish was impressive, scoring 12.8 points per game on 52.8% shooting from the field (including 46.4% on threes).

The Knicks obviously haven’t lived up to the expectations borne from their run to the fourth seed last season, and the hope is that Reddish could provide a spark, especially since Julius Randle hasn’t come close to improving on last season’s success.

Things seem to be going from bad to worse for the league’s reigning Most Improved Player, with the final 30 seconds of the Knicks’ two-point loss to the visiting Minnesota Timberwolves serving as a microcosm for his nightmare season. Randle gave up a three-point play to Karl-Anthony Towns, which lost the lead for his Knicks before Julius split a pair of free throws on the ensuing possession that could have tied the game.

But Randle is far from the only problem that the Knicks have had.

Derrick Rose has been missing in action since undergoing ankle surgery on Dec. 22, while Kemba Walker and Evan Fournier haven’t exactly lived up to the hype. It’s obvious that the Knicks need something, and the hope is that — even if only to a small degree — Reddish can help provide some sort of solution.

In short order — and perhaps as early as Sunday — Tom Thibodeau will get his answer.