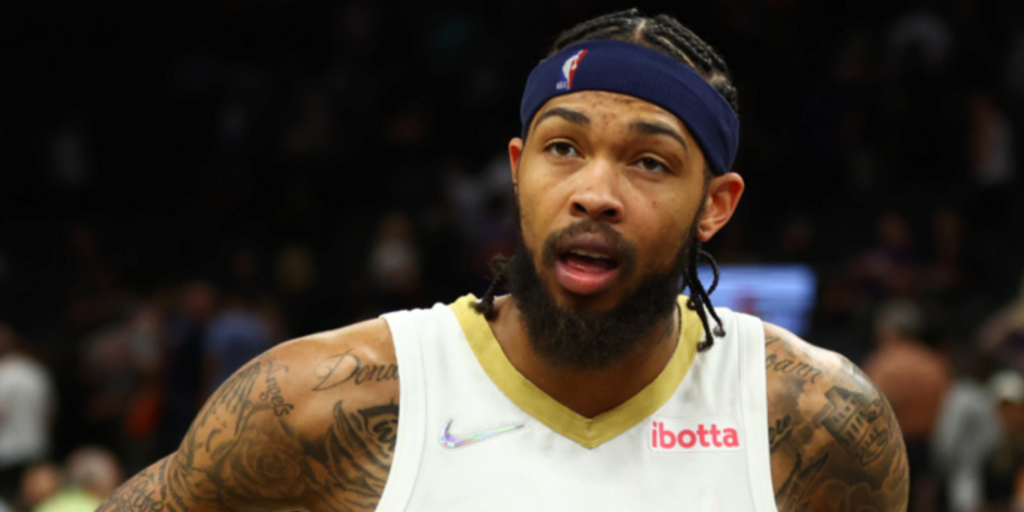 You hear that alarm going off? It’s a wake-up call from Brandon Ingram reminding all NBA fans how good he truly is.

How quickly we forgot Ingram made his first All-Star Game in the 2019-20 season, carrying the Pelicans before young phenom Zion Williamson came along the follow year. Now, without Williamson all season long due to offseason foot surgery, Ingram has spread his wings in his third season in New Orleans, and is thriving under new Pelicans head coach Willie Green’s guidance.

On the biggest stage in the NBA, Ingram is unfazed and flourishing as the best player in the team's series against the Western Conference’s No. 1 seed. The young, feisty Pelicans have the Phoenix Suns on the ropes, as the first-round series is tied through four games.

It's to nobody's surprise, but Ingram has been the catalyst behind New Orleans’ recent surge. Over the Pelicans’ last six games — including two Play-In Tournament games and their ongoing series with Phoenix — Ingram’s numbers are gaudy: 29.3 points, 6.3 rebounds and 5.2 assists with 63.4% True Shooting percentage. With that kind of production, he has helped back the West’s juggernaut into an early corner and flipped this series on its head, and, as a result, it's placing all the pressure on Phoenix to finish this series off without its best player in Devin Booker due to a strained left hamstring.

Ingram’s latest masterpiece unfolded in a perfect way for New Orleans in Game 4, dropping 30 points with little resistance. 16 of which came in a huge third-quarter spurt. Following the Pelicans’ 118-103 blowout win over the Suns on Sunday evening, Ingram calmly put his recent play into perspective while also applauding all of his teammates.

“To God be the glory. I feel this is our time,” Ingram said. “[We] worked so hard throughout the year to become a better team, and we finally get the chance to be on a really, really big stage and continue to play together. My teammates [have] been helping me out a lot, putting me in the right spots, passing me the ball in the right areas. Just making me look good. It’s been a team effort. I just love playing with the guys.”

With series momentum entirely on New Orleans’ side right now thanks to Ingram’s virtuoso scoring performances, the Suns will have to quickly find a counter-punch to the near-knockout blow that was delivered to them on Sunday.

Whether it be Jae Crowder (Ingram’s primary assignment throughout the series), Mikal Bridges, Cameron Johnson or Torrey Craig, Phoenix’s wings have had no answers to trying to guard the ascending Pelicans star. When guarded 1-on-1 by one of the Suns’ four wings, Ingram is shooting 31 of 54 (57.4 FG%). Take a gander at how easy it’s been for Ingram as of late:

If this continues for the Pelicans, and Ingram is seemingly unguardable against blanket coverages thrown out there from the Suns, it changes everything for this now-best-of-three showdown.

“Extremely valuable” Green said of Ingram’s postseason play. “Brandon is playing some of his best basketball of the season, and he’s doing it on the biggest stage. It’s great to see, and he’s more than capable. I’ve said it before, he’s the real deal and he goes out on the floor he puts the work into practice and we’re seeing it on display.”

In Game 4, the Suns kept trying to claw back to make it a competitive back-and-forth contest, but New Orleans continued to slam the door in their face. Ingram’s scoring package, coupled with aggressive on-ball defense from rookies Herb Jones and Jose Alvarado, led to a best-case scenario unfolding for the Pelicans.

During a pivotal stretch in Game 4, Phoenix brought it down to a one-possession game in the third quarter before Ingram decided to put the series in his own hands. Consistently delivering with extremely tough shots being made, Ingram has put everyone back on notice in regards to his superstar ceiling.

Crazy enough, Ingram is still only 24 years old. Not even close to his prime years yet, Ingram’s dazzling postseason is another reminder of why the Pelicans are closer than we all expect. Obviously missing Williamson for the entirety of the season plays a huge factor, but this new group spearheaded by Ingram and CJ McCollum in the meantime has inspired hope once more in the Bayou.

“It was great,” Green said postgame of Ingram’s 16-point third quarter. “I could see that his mindset right away was ‘I’m gonna get us going.’ And that’s what he did. He has moments where I can kinda see it in his eyes that he’s going and I try to move out the way and let him do what he does.”

This series continues to be played tingly on the margins both ways, but the Pelicans actually have a plus-12 point differential; both teams have won a game by 11 points each. Phoenix barely escaped Game 3 behind Chris Paul’s fourth-quarter magic, and then two nights later, we all witnessed an authoritative beatdown of the league's top overall seed courtesy of the NOLA underdogs.

Can the Pelicans truly pull off the unthinkable and take down the Suns? With the way Ingram is putting the team on his back as of late, that’s a real possibility. Never too high, never too low, Ingram’s mindset is fully locked-in for an upcoming three-game war with the Suns.

And that alone is an uneasy feeling that the Suns have to deal with as the series shifts back to Phoenix with all momentum on the opposite side.

“Superstar,” Jose Alvarado said postgame about Ingram. “He big time. He told me this is his first time (in the playoffs). It don’t seem like it. He wants to win. He’s going to do a lot for us. Mentally, he’s going to be really good for us.”

Allow Ingram to reintroduce himself as a star-caliber player — one who developed under the radar before loudly breaking out, and pushes the envelope even further for the resilient Pelicans.