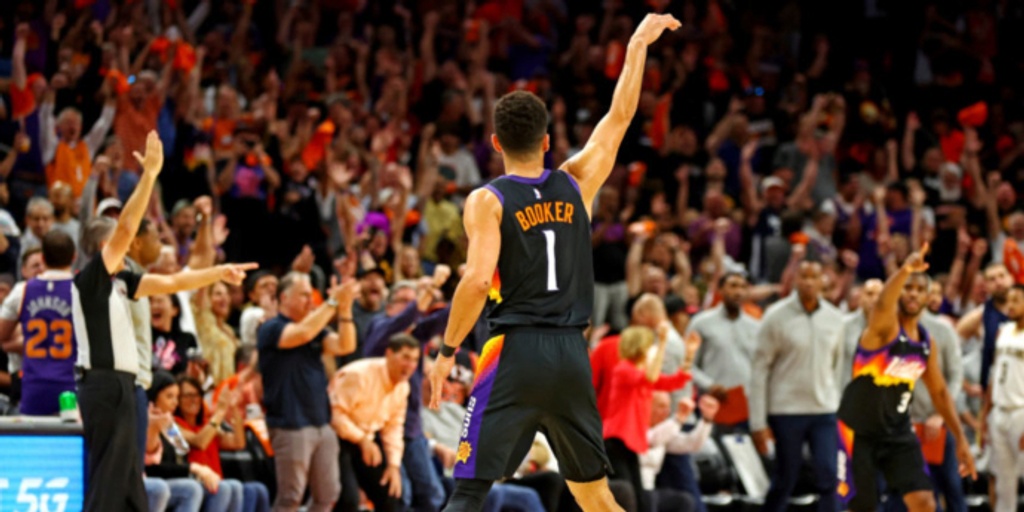 It’s unfortunate NBA fans were robbed of what was bound to be a special moment on Tuesday night in Phoenix. Devin Booker was going supernova, putting up 31 points in the first half and taking the breath out of every spectator as they watched it unfold. The Suns' superstar seized the moment and pounced on the New Orleans Pelicans relentlessly, potentially on his way to dropping a postseason 50-burger.

As such, Phoenix was also well on its way to taking a commanding 2-0 series lead before the series shifted back to New Orleans, but Booker exited midway through the third quarter due to right hamstring tightness. Booker suffered the injury chasing Jaxson Hayes back in transition, which was a bugaboo for the Suns throughout their 125-114 loss in Game 2.

ESPN’s Adrian Wojnarowski reported that Booker has a mild hamstring strain, which is likely to keep him out of the next two games in New Orleans. The positive note, though, is that the strain is believed to be mild, and Booker hasn’t been ruled out for the remainder of Phoenix’s opening-round series.

“It is what it is. It’s part of the game, you know what I mean," Chris Paul said postgame of losing Booker. "We got guys that are more than capable of stepping up. I mean, Book was killing it. He was having a big time game, but it is what it is.”

Booker erupted in the first half against the Pelicans, and he continued to stay hot in all portions of the game. Kicking it all off with 16 first-quarter points, Booker followed his opening frame with 15 in the second quarter. Hitting 7 threes along the way, the Suns' 25-year-old star was doing whatever he wanted against New Orleans.

“He was hot. He was scoring the ball well and playing well all across the board, so it is what it is," Cameron Johnson said. "We have to continue to fight and continue to play our style of basketball.”

DEVIN BOOKER FROM THE LOGO.

HE'S GOT 31 AT HALFTIME 🤯#NBAPlayoffs presented by Google Pixel on TNT pic.twitter.com/KvE4PhzA6n

Booker returning for Game 5 in six days could very much be in play, especially if it’s indeed mild and there’s no setbacks. If the Suns are able to split against the Pelicans at the Smoothie King Center, their job will be done in snatching back home-court advantage without Booker.

As New Orleans showed in Game 2, though, it is a group ready to make this tough on the betting favorites to win this year’s NBA Finals.

Pelicans head coach Willie Green, a former Suns assistant, put together an excellent game plan to stymie Deandre Ayton and Chris Paul from having major impacts. Green has implemented Suns-esque DNA into the Pelicans, empowering his players to the highest belief and the same never-give-up mindset.

When Brandon Ingram and CJ McCollum catch fire simultaneously, it's tough for any team to handle. However, the Suns’ lack of defensive discipline on the perimeter was apparent, as the Pelicans shot a blistering 17 of 31 on threes. Ingram put on a scoring clinic with 37 points — most of which came against Defensive Player of the Year runner-up Mikal Bridges — reminding everyone just how special of a talent he is.

As our own Nekias Duncan wrote, Phoenix’s adjustments without Booker will revolve around its patented ball movement in head coach Monty Williams’ “0.5 offense” scheme. More of the burden will be on Paul’s shoulders, and the Pelicans have forced Phoenix into having Jae Crowder or Johnson bring the ball up the court to avoid Herb Jones' full-court pressure on CP3.

Earlier this season, Booker missed time due to a left hamstring strain he suffered in the Suns' fun back-and-forth battle with the Golden State Warriors on Nov. 30. In seven games without Booker, Phoenix went 5-2 with three wins by double-digits. When canvassing through the numbers for this two-week stretch, Cameron Payne and Landry Shamet saw boosts in their roles. We already saw this play out in the second half of Game 2, which included Shamet playing most of the fourth quarter in Booker’s absence.

Zooming out on Booker’s hamstring issue, what is worrisome is that this is now becoming a recurring soft tissue issue. Since 2018, Booker has missed time on the injury report with "Hamstring" listed six times, and he also let it be known he played in the Finals last season with a similar problem as well.

Hamstring woes have been a constant for Booker throughout his career, but this popping up now is such unfortunate timing. Luckily it’s only the first round against a 36-win Pelicans team, but there’s no doubt about it that this series could be a tough road ahead for Phoenix. With the way New Orleans is rallying as an inspired group, a six-game series feels like the most realistic scenario with Booker’s presumed return next week.

The 2021-22 Suns are one of the most dominant NBA teams in the last few years. On their way to securing a franchise record 64-win campaign, they fought though multiple injuries where important players missed extended time (Paul, Ayton, Johnson and Booker all included). That same next-man-up mentality was what Williams alluded to postgame after a stunning loss for the Suns, but now, the momentum of this series has temporarily shifted.

As the series heads back to the Bayou, tough sledding is ahead for the Suns without Booker in what should be an electric playoff environment.

Expect to see Phoenix trot out a new starting lineup where Johnson is inserted for Booker, making it: Paul, Bridges, Johnson, Crowder, Ayton. During the regular season, this five-man lineup combination only logged 12 games and 40 total minutes together. In that short sample size, though, it was outscoring opponents by 35.6 points per 100 possessions (123.5 Offensive Rating, 88.0 Defensive Rating).

Phoenix dodged a serious long-term bullet with the initial diagnosis on Booker’s aggravated hamstring, but a worst-case scenario occurred for the team in Game 3. The Suns lost their star player, and that has handed over momentum to an underdog on a silver platter, now making what was believed to be a quick series a much more treacherous path.

Although it will only sideline him around a week, this series will take a few turns before his eventual return. If the Pelicans stay hot behind the arc, and continue to abuse Phoenix in the rebounding department, who knows how this looks when Game 5 tips off next Tuesday.

Urgency is in the air in Phoenix, a rare feeling that has to be punctuated by taking back the series on the road without its best player.

“We going to be ready, man," Bridges said. "That’s our brother, so obviously hoping everything goes right, but I know everybody is ready to step up, so we’ll be ready. We went through regular season games without him and (Chris Paul) and (Deandre Ayton), so we’ll be ready for sure.”