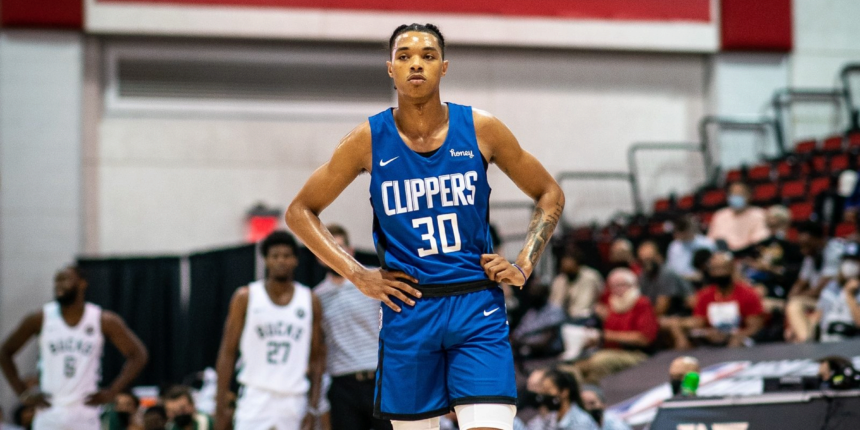 Brandon Boston Jr. determined to validate Clippers' trust in him

In a postgame media appearance for the Los Angeles Clippers at NBA Summer League, Brandon Boston Jr. was taken aback by a reporter’s question about his lone year in college.

“Great season at Kentucky? Whew,” Boston said with a look of confusion. “Respect, but...”

Such is the honest realization of a player that knows he could’ve been better in Lexington, producing just 11.5 points and 4.5 rebounds per game on a pedestrian 35.5% from the field. Remember, this was a top-10 high school prospect going into 2020 with the Wildcats, and most draft experts projected him to be an easy one-and-done 2021 lottery pick at that time.

Instead, Boston dropped — and dropped hard. With a selection that originally belonged to the Memphis Grizzlies, it was the New Orleans Pelicans who unofficially drafted Boston with the No. 51 overall pick and rerouted him to LA, a franchise that coveted him.

“The night of the draft was crazy 'cause I was on three different teams in five minutes, so I was really confused. I had like an outer-body experience,” Boston admitted. “I didn't really know what was going on 'til like an hour after I got picked. They told me I was with the Clippers, and just told me I couldn't do anything 'til I signed my contract…

“I went to both [pre-draft] workouts. They had me twice. So I went and dominated both workouts, and they just loved my game. I feel like that's a great staff to be a part of, so just going in there and working started everything."

On Aug. 8, Boston and the Clippers agreed to a two-year, $2.5 million deal (terms via Spotrac's Keith Smith), the most guaranteed money in league history for a draft pick in the 50s, meaning he would be revved up for his L.A. debut in Las Vegas the following day. And while his initial performance didn’t jump off the page — 10 points and four rebounds in 22 minutes — it did show why the franchise’s front office was enamored with his skill set.

“Since we've gotten Brandon, we've seen that he has the ability to score the ball in a multitude of ways, but also — and we're talking to him about it — is just being able to facilitate, and I think he's starting to do that as well,” Clippers summer league head coach Jeremy Castleberry said following LA’s first contest. “I talked to him about it after the game. I told him he did a great job.

Playing his first organized basketball for the first time in what seemed like forever, Boston felt there was some rust to shake off.

“Just coming into games, all your emotions are peaking, so you're just ready to play, you're anxious,” Boston said. “But as the game goes on, you start to settle in and find out where you can help the team...

“...Just going out there, going up and down with 10 people on the court, I haven't done that in like five months," he added. So just going out there and getting my run in. I'm grateful to be out here and compete at a high level...“

Albeit a small five-game sample size, Boston looked far and beyond his draft standing.

Offensively, there is a slew of weaponry he can unleash. Boston’s ball-handling skills are clearly evident. He has a good feel for timing already — under control, but with pace — using a hang dribble coming off screens to keep the defender guessing whether he’s going to pull-up or drive.

“That's another thing I couldn't show at Kentucky — my ball-handling — but a lot of people don't know that's the first thing I learned how to do before anything,” Boston said. “My ball-handling's always been pure, so I just grew into a tall body. I always had the handle."

In many cases, Boston created his own space with quick footwork on stepbacks and side steps (mostly going to his left). I’m going to do my best Nekias Duncan impression here and leave you with this gem of a clip to show you how quickly he can make things happen:

And that was off of a catch.

Speaking of which, Boston’s array of abilities does include being a smooth spot-up guy. In Vegas, he relocated to the corners well in transition and was ready to fire, and didn’t hesitate to pull the trigger on the elbows either. He understands his role will differ much more on the big stage.

“In the regular season we're playing with PG, Kawhi and all those good guys, so I'm not gonna be able to dribble high 1-2,” Boston said. “So just getting to that corner, getting to the shots that I need and the shots that are gonna be taken during the season. That's something I'm just practicing on.”

In multiple instances, Boston used that threat of shooting to take his defender off the dribble and open things up for himself and his teammates.

“Definitely just going downhill, reading the defense, kicking it to the open man and just making a play if I've got a play,” Boston said of his focus at summer league. As observed by Forbes Sports reporter Shane Young, The Clippers also did plenty of work trying to set him up off the ball as well, setting screens at the elbows to free him up in the middle.

Though the good highly outweighs the bad, Boston could use a little more sense on his drives, a handful of which seemed to come without a plan.

Zion Williamson had offseason foot surgery, should be ready for season
yesterday

As a defender, Boston didn’t wow, but at the same time, he didn’t disappoint. He has the ability to stay in front of guys on the ball and in pick-and-roll situations. With cutters and guys in motion, however, he’s got work to do. If you’re trying to gain the upper hand on the 19-year-old swingman, all you have to do is catch him sleeping with a backdoor cut or a juke of some sort. Boston also appeared to have some trouble with shiftier handlers that got a step on him on the way to the cup.

Boston closed the summer league out with his most aggressive performance, notching 20 points on 8-for-14 shooting with a pair of blocks in a loss to the Memphis Grizzlies. Two games prior, he had a 17-point, 5-rebound night in which he hoisted a potential game-winning attempt that was well off the mark, as LA lost to its rival Lakers by two.

“Game that,” Boston’s teammates told him prior to the courageous try. He had no regrets about the shot he got. He was just grateful for the Clippers’ trust in him to let it go in the first place.

And trust is the word Boston kept falling back on with the organization that took a chance on him — no matter what point he was drafted.

“[I’m] taking it one day at a time. Just trusting my work. All the work that I put in this offseason, it just showed today,” Boston said following that loss. “So letting the game slow down for me, making the right reads on offense and defense and my team just trusting in me — and me trusting in them."

Who has the most efficient free-throw shooting season in NBA history?
16h