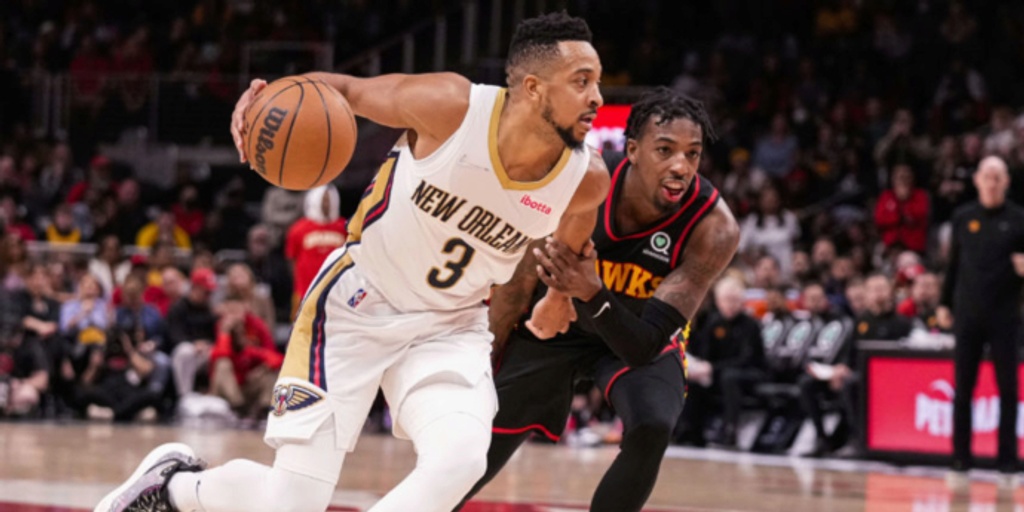 CJ McCollum excited for next chapter with Pelicans after chaotic year

The 2021-22 NBA season has been the hardest of CJ McCollum’s career.

Entering this campaign, he had spent the entirety of his NBA career with the Portland Trail Blazers, making the playoffs every year. Since getting drafted in 2013, he had only ever played for one head coach (Terry Stotts) and one general manager (Neil Olshey).

However, this season would be full of challenging firsts for McCollum.

Over the summer, he experienced his first coaching change, as the Blazers fired Stotts and his staff. Just as McCollum and his teammates were adjusting to new head coach Chauncey Billups, Portland announced that Olshey was under investigation after complaints of bullying, hostility and creating a toxic work environment. Shortly after, Olshey was fired, with Joe Cronin being promoted to interim GM midseason. McCollum was shocked and admitted that the turnover affected him.

“This is different than anything I’ve ever experienced because of the circumstances,” McCollum told The Athletic in December. “This is the first year of my career where we lost our whole coaching staff, brought in a new coach, a new staff, the GM gets fired in the middle of the season... all of that affects you on the court. But there is no excuses. I didn’t come here to tell you, ‘There’s a lot of sh** going on...’ but yeah, there is. There’s sh** going on every day. And I’m a fu**ing human being. But look, at the end of the day, my job is to play basketball. So, I go play basketball.”

The day after Olshey was relieved of his duties, McCollum suffered what he thought was a rib injury during the Blazers’ game against the Boston Celtics. However, a CT scan revealed that he had a collapsed lung, which would ultimately sideline him for six weeks.

Several weeks later, McCollum became a father when his wife, Elise, gave birth to their first child. Jacobi James McCollum was born at 11:59 p.m. on Jan. 10, 2022. Becoming a first-time parent is scary enough, but there are additional concerns and stressors when your baby is born during a pandemic.

Congratulations to @CJMcCollum & his wife Elise on the birth of their son,
Jacobi James McCollum! ðŸ˜

As McCollum mentioned, his name had been surfacing in trade rumors for much of the season. He wasn’t a stranger to the rumor mill, but the rumblings had never been quite this intense. And with Portland struggling, a number of Blazers were looking over their shoulders and wondering what moves might be coming as the trade deadline approached.

“I’d be lying if I told you that we don’t hear it or that it doesn’t affect us at all,” Blazers forward Nassir Little told me in December. “At the end of the day, we’re people. I get the excitement of trades and the eagerness to talk about them, but you’re talking about people having to move their families and basically break off relationships that they’ve built over the course of time and they have to start a whole moving process and adapt to a whole new situation. It’s just a lot of things that go into getting traded as a player and those things don’t really get taken into account [by fans]... There are a lot of different dynamics that are very taxing on somebody’s mental when you get traded.”

On Feb. 8, less than one month after his son was born, McCollum was traded for the first time in his NBA career. The Blazers dealt McCollum, Larry Nance Jr. and Tony Snell to the New Orleans Pelicans for Josh Hart, Tomáš Satoranský, Nickeil Walker-Alexander, Didi Louzada, a protected first-round pick and two second-round picks.

In other words, McCollum and his family suddenly had to move across the country. After an athlete gets traded, it’s emotional and stressful since you’re relocating to a new city on very short notice. Sometimes, players will live in a nearby hotel until they find a place to rent or buy. Going through that adjustment with a newborn is less than ideal.

After nearly nine years in Portland, McCollum was starting over with a new organization. Fortunately for McCollum, the Blazers’ front office gave him some say in where he ended up, so he was starting the next chapter of his NBA career in his preferred destination. Why was he drawn to New Orleans?

"It was a combination of things: the culture, the city, the people, the love — you can feel it, you know what I’m saying? I felt it from afar,” McCollum said on the Knuckleheads Podcast. “I love the atmosphere. And if you do what you are supposed to do in a city like this, you will be loved forever. If you embrace them the way they embrace you, you can become legendary. I wanted to be where I was wanted, where I was needed. There's a lot of culture here, a lot of diversity and the food is fire. And they've got a lot of young talent. They’ve got a lot of really good basketball players.”

“There's a lot of talent on this roster, and I think I can get the most not only out of my career, out of my situation, out of my development, but also out of the guys,” McCollum added. “I know what it takes to be successful consistently. And I can not only tell you about it, but I can show you because I've done it. I think that I'm just what they've needed and they're just what I've needed, especially at this stage in my life. And I think there's no better time for me to [make this move]. I’m 30 years old, I've been in the playoffs for eight straight years and I'm trying to make it nine.”

New Orleans is now 32-43, which is the ninth-best record in the Western Conference. Since adding McCollum to their lineup, the Pelicans have the NBA's 10th-best offense (117.4 points per 100 possessions) and 14th-best defense (114.3 Defensive Rating). That is a plus-3.1 efficiency differential, which is eighth-best in the NBA over that span — ahead of the Philadelphia 76ers, Miami Heat, Brooklyn Nets, Milwaukee Bucks, Golden State Warriors and Dallas Mavericks.

McCollum’s teammates are thrilled to have him in New Orleans and they rave about his impact.

“I told CJ that I love him; he makes our job easy,” Willy Hernangomez said. “He makes everybody’s job easy. Everybody pays so much attention to him. We just need to set the screens and play the right way... We’re trying to build something different and something special here. Every day, we just try to be 1% better than the day before. It has been amazing having CJ, Tony and Larry. Their experience has been helping us a lot. I think we’re going to keep going and getting better. We’re having fun, and that’s the most important thing.”

“[We’re] definitely locked in. That starts with [CJ] and BI just coming out, being aggressive, being under control,” Graham said. “They’re making life easier for everybody.”

Ingram and McCollum have only played 11 games together (since Ingram was recently sidelined for three weeks due to a hamstring injury), but they have shown flashes of the dynamic one-two punch that they could become. Across those 11 games, McCollum and Ingram have averaged a combined 48.1 points, 11.9 assists and 11.0 rebounds while shooting 51.6% from the field and 35.6% from three-point range.

“He’s very similar in his approach, in the way he watches film, in the way he communicates. He’s receptive of information,” Ingram said of McCollum. “It’s fun to play here right now.”

The Pelicans are getting healthier just in time for the Play-In Tournament. Ingram is back in the lineup and McCollum is healthy after missing a few games due to COVID-19 (which had to be scary with a newborn at home). Also, Nance just made his Pelicans debut last week.

Unfortunately, the Pelicans won’t be at full strength until next year, as Williamson has been ruled out for the rest of the season due to his foot injury. In addition, Kira Lewis Jr. is sidelined after tearing his ACL in December.

Still, it's fun to think about how good this squad could be next year if everything comes together.