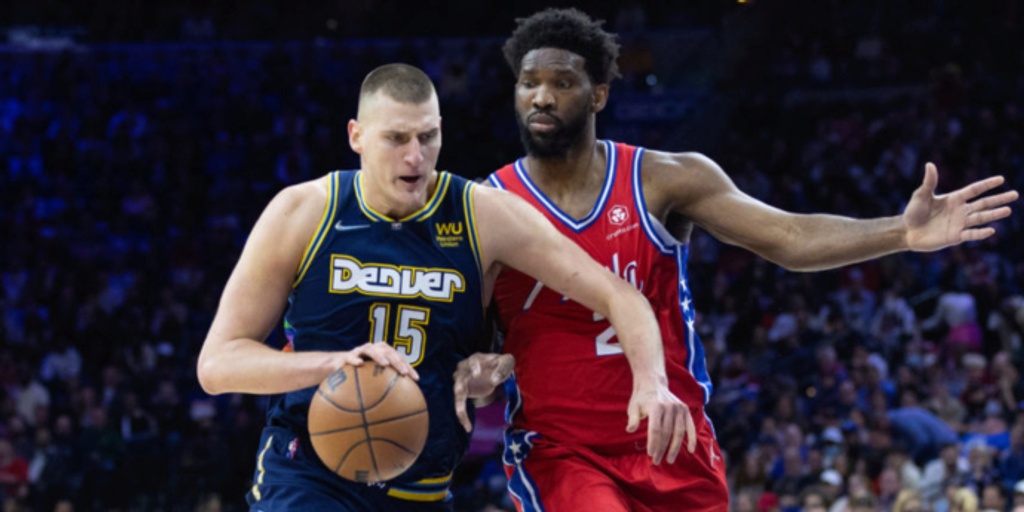 Some years, the NBA MVP is unmistakable.

It's when voters, fans, coaches and pundits everywhere unite in agreement that one player has proven himself more valuable than all others. For instance, Shaquille O'Neal fell one vote shy of being the first-ever unanimous MVP in 2000. In 2013, LeBron James received 120 of the 121 first-place votes cast, and a short three years later in 2016, Stephen Curry became the first player ever to receive the MVP award via a unanimous vote.

This year is NOT one of those years, one where voters could make a compelling, cogent and convincing argument for several different players to take home the league's most prestigious individual award. It seems possible that the 2021-2022 season could gives us the closest vote in NBA history.

So after plenty of deliberation, here's how my ballot would look.

Put simply, Nikola Jokic is in the process of authoring one of the greatest statistical seasons the NBA has ever witnessed. He is averaging a mind-boggling 26.3 points (on 57.6% shooting), 13.6 rebounds, 8.0 assists, 1.4 steals and 0.9 blocks in just 33.2 minutes per game. He leads the Nuggets in each of those statistical categories, and is on pace to become just the fifth player in league history to finish a season ranking in the top 10 in points, boards and dimes. (The other four are Wilt Chamberlain, Elgin Baylor, Oscar Robertson and Russell Westbrook.)

Despite playing without star guard Jamal Murray and forward Michael Porter Jr., the Nuggets are currently 14 games above .500. The team's second-leading scorer is Will Barton. Monte Morris is second on the team in assists. Aaron Gordon is Denver's second-best rebounder. Yet, thanks to Jokic's all-around brilliance, the Nuggets trail the Northwest Division's first-place Jazz by just a half-game.

Nikola Jokic dropped his 19th triple-double of the season to propel the @nuggets to the win! #MileHighBasketball

When it comes to advanced metrics, Jokic's production is even more prolific. He leads all players in RAPTOR, LEBRON and ESPN's RPM this season. Oh, and he's on track to record the highest single-season PER (32.68) and best Box Plus-Minus (13.83) in NBA history.

Make no mistake, Joel Embiid is worthy of winning the MVP Award. The Sixers were seemingly skidding out of control in the weeks and days leading up to the start of the 2021-22 campaign, all due to the drama and uncertainty surrounding the Ben Simmons saga. But , Embiid put the team on his back and got them off to a good start, and they haven't looked back.

The big man's overall numbers are jaw-dropping: 29.9 points, 11.4 rebounds, 4.2 assists, 1.2 steals, 1.5 blocks and 1.3 made three-pointers per game. He currently ranks second in the league in scoring (just 0.2 points per game behind LeBron James), and Philly is just a game behind the Heat for the best record in the Eastern Conference. (Each of the last four players to lead the NBA in scoring on a team that finished the year with the league's best record went on to win MVP that season: Curry, James Harden, Shaq and Michael Jordan.)

Down by 12 points at the half, @JoelEmbiid led the @sixers to a comeback pouring in 23 points in the second-half & OT! pic.twitter.com/HRQYxhskAF

Like Jokic's Nuggets, the Sixers are wholly dependent on Embiid to carry them each night, as evidenced by Philly's 6-11 record when he sits or scores fewer than 18 points. The team averages 114.4 points per 100 possessions when he is on the floor, and that number plummets all the way down to 106.8 when he is on the bench.

It's also crucial to note that Embiid has been at his best in big moments. According to NBA.com, he leads the NBA in total points (147) scored in the clutch this season (Jokic ranks second). In crunch time, Embiid is shooting 48.9% from the floor and a scorching 45.5% from downtown.

Giannis Antetokounmpo has seemed to fly under the radar this season. That may be because he is just a year removed from winning back-to-back regular-season MVPs, and less than 10 months removed from capturing NBA Finals MVP for his otherworldly performance that led Milwaukee to its first title in 50 years. However, let's not take for granted the fact that this man is averaging a career-high 29.7 points on 55.0% shooting to go along with 11.6 boards, 5.8 dimes 1.1 treys, 1.4 blocks and a steal per contest. He's on pace to become the first player in over 30 years to average more than 29 points while shooting above 55% from the floor and 70% from the free-throw line.

Giannis scored 20 of his 30 points in the second half tonight & tied a season-high with 4 blocks.

And as we know, Giannis is also dominant on the defensive end. In fact, he's currently ranked No.1 on NBA.com's latest ranking of the league's top defenders. The only players to ever finish in the top-three in scoring and win the Defensive Player of the Year in the same season were Hakeem Olajuwon (during his MVP campaign in 1993-94) and Michael Jordan (during his MVP season in 1987-88). In most other years, Giannis would be a heavy favorite to take home the hardware.

The Celtics were sitting at .500 in mid-January, but Jayson Tatum has played at an MVP-caliber level in the three months since, catapulting Boston up to the No. 1 seed in the East for a brief moment this past weekend. During this 30-game stretch, he has averaged 29.2 points, 7.4 rebounds, 5.0 assists and 3.7 made triples, while slashing .495/.394/.880.

Jayson Tatum is a scoring machine, he dropped 44 points to log his 4th-straight game with 33+ points, and lift the @celtics to their 4th-straight win! @jaytatum0: 44 PTS, 5 REB, 3 STL, 6 3PM pic.twitter.com/hIgVphSaWp

On the season, the Celtics have outscored their opponents by 608 points with Tatum on the floor, which is the highest individual plus/minus in the entire league. On Monday, he was named the East's Player of the Week for the third time in March. The only other player in NBA history to win the award three times in the same month is LeBron James in January 2012.

After a slow start to the season for both Doncic and Dallas, Luka has been a beast, and the Mavs have climbed up to fourth place in the Western Conference standings. Dating back to late December, Dallas has won 30 of its last 41 games, and is 17 games above .500. Since New Years, Luka has averaged 29.2 points, 9.8 rebounds and 8.5 assists per contest.

He has led the Mavericks in points, rebounds and assists in the same game 28 times in 2021-22. Although he'll likely finish outside the top three in MVP voting this season, Doncic continues to establish himself as one of the most prolific young players the league has ever seen.

Good tidbit via StatMuse: Devin Booker is on pace to become just the 10th player in NBA history to average 25/5/5 on a team that finishes a season with a winning percentage above .800. Eight of the previous nine players in the exclusive club went on to win the MVP.

Ja Morant has posted dazzling numbers whenever he's been on the floor. The fact that he leads the NBA in points in the paint this season is almost unimaginable. And the Grizz have been arguably this season's most pleasant surprise. However, Morant has missed 20 games, and Memphis is 18-2 (!!) without him in the lineup.