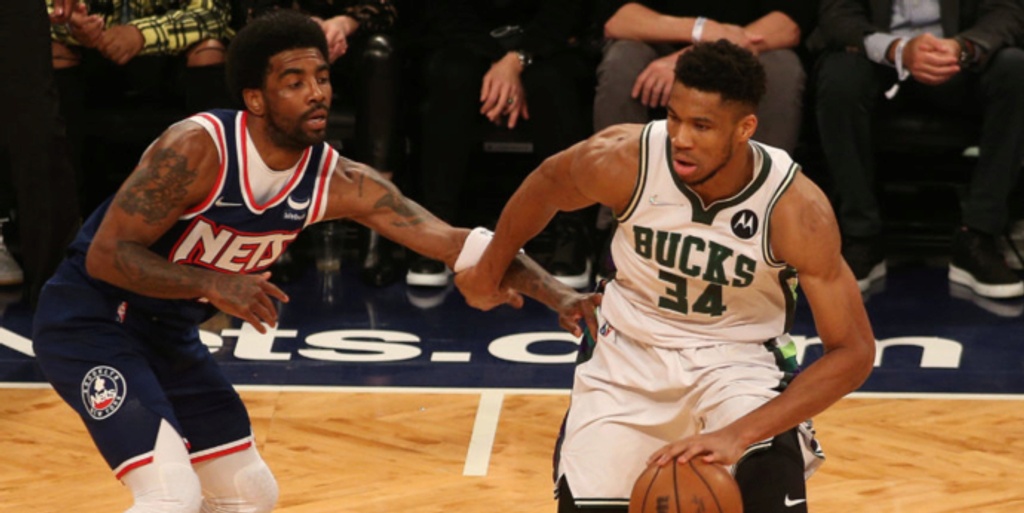 Betting the East: Possibilities are endless for NBA Finals contenders

After looking at how to bet the Western Conference in the forthcoming NBA Playoffs, we now turn our attention to the Eastern Conference. Parity is of the essence atop the East, which includes five teams with a legitimate argument to win the conference and make a run to the NBA Finals. From a betting perspective, sportsbooks are all over the place when it comes to forecasting what’s next in the East. How should the conference be divvied up before the postseason? Let’s dive into the odds.

I have this weird feeling building we’re going to get Suns vs. Bucks Part II in a few months with another championship on the line. As of late, Milwaukee is finding a groove and rounding into form for their title defense. Giannis Antetokounmpo can break any defense apart, so another dominant run could cement his overall legacy. Considering the Bucks have such a strong rotation, the safest bet right now is to repeat last year’s Finals matchup.

Last season saw Durant nearly beat the Bucks by himself in the Eastern Conference Finals. If Irving stays healthy, the main theme of top teams repeating could circle back around for an epic early-round clash.

Kudos to BasketballNews’ own Spencer Davies, because he called it on the first “Nothing But Bets” podcast episode previewing the 2021-22 season. He said that Miami was going to surprise some people and was right on the money. Miami has the two-way versatility to compete with the East’s elite. The leaps from Tyler Herro and Bam Adebayo have taken pressure off of Jimmy Butler, and it always helps to have a soothing veteran point guard presence in Kyle Lowry.

Miami has shown lockdown potential on both ends of the court, so if they have a hot shooting series, they can go toe-to-toe with anybody.

Losing Robert Williams due to injury is going to hurt Boston in the short-term, but this team has been scary good since the All-Star break. Jayson Tatum is one of the best scorers in the NBA, and Jaylen Brown is finding his spots within the flow of the offense. Any concerns related to Tatum and Brown’s on-court fit have fizzled out. Boston has the star power to win big, but they also have some veterans who can be key in postseason pushes.

If I wanted to throw a dart at any of the odds presented on the board, Philadelphia gets my attention. The odds at +500 are simply too good to pass up. Betting on a historic postseason from Joel Embiid and James Harden, who continue to build chemistry together, has an extremely high ceiling. Tyrese Maxey has also begun to blossom, helping form a fun long-term trio in Philadelphia. I wouldn’t be stunned if we saw the Sixers make the Finals, and I still feel there’s a real shot there.

Unlike the Western Conference’s top Tier 3 team, the Utah Jazz (+950), Chicago kicks it off at +2700 odds. It’s been disappointing to watch the Bulls lose steam over the last few months because the early potential was off the charts. DeMar DeRozan is a perfect fit within the Bulls’ system alongside Zach LaVine, but losing Lonzo Ball and Alex Caruso for the majority of the regular season were massive blows. Maybe the Bulls can surprise in the first round, but betters shouldn't expect much beyond that, especially now that Ball is officially out for the season.

Second to Philadelphia on my favorite odds out East, Toronto at +3000 is very tempting to hammer. The Raptors have caught lightning in a bottle for a while now, and their blend of win-now veterans and exciting young players is fun to watch. Pascal Siakam deserves an All-NBA spot, and the trio of Fred VanVleet, Scottie Barnes and OG Anunoby provide ideal two-way balance. Versatility is off the charts in Toronto, and there’s a reality where they could be playing in the Eastern Conference Finals. Don’t sleep on the Raptors because they’ve been quietly impressive since February.

In the opposite direction of Toronto, Cleveland checks in with long +5500 odds. The Cavaliers were rolling behind their dynamic young trio of Darius Garland, Jarrett Allen, and Evan Mobley. When Allen, their two-way All-Star anchor, went down it knocked the wind out of Cleveland’s surging sails. Garland taking the leap could help Cleveland become a frisky opponent out early in the postseason. I’m excited to see what happens this offseason for a team ready to take another huge leap forward in 2022-23.

In Tier 4, the odds are bordering on impossible for an NBA Finals run. Atlanta has been one of the NBA’s most disappointing teams this season after their surprise run to the Eastern Conference Finals a year ago. Trae Young is doing his best to carry a consistently short-handed Hawks squad, which is leading to some absurd individual numbers along the way. Maybe Young can help Atlanta push a team in the first round, but betting against another surprise run shouldn’t be off the table.

Charlotte is one of my favorite teams to watch this season when they get humming offensively. LaMelo Ball running the show is so entertaining, plus they have a plethora of high-volume three-point shooters. Miles Bridges’ leap in a contract year makes him a pillar piece to Ball in Charlotte. It would be fun to have the Hornets in the postseason, but it may be a very quick exit for them. If Charlotte can add one more game-changing piece in the offseason (Myles Turner, perhaps?), they could take a huge leap in 2023.

Analyzing the betting odds in the Eastern Conference, the possibilities are endless. Five teams sit within the first two tiers of Finals probabilities, and it wouldn’t be surprising to see a team with longer odds (Raptors, Hawks, etc.) make a surprise push further.