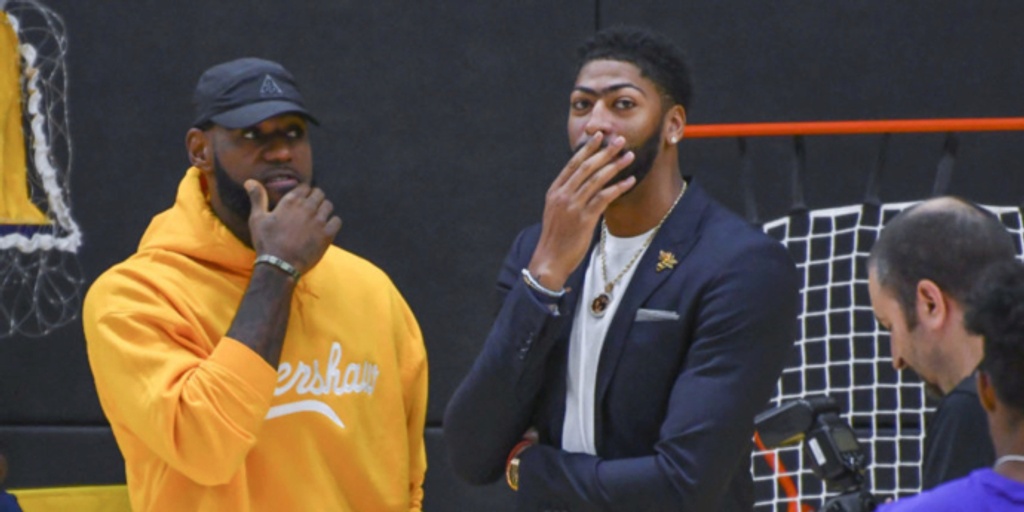 There wasn’t exactly a consensus about how the 2021-22 Los Angeles Lakers’ season would end, but it’s probably safe to say that nobody foresaw this.

On Tuesday night, the Lakers saw their bleak playoff hopes reduced to zero when the San Antonio Spurs defeated the Denver Nuggets, and immediately thereafter — and rightfully so — Frank Vogel, Anthony Davis, LeBron James and Russell Westbrook were all in the news.

In the end, there’s no single reason the Lakers turned in one of the most disappointing seasons in franchise history — there’s enough blame to go around.

What Rob Pelinka needs to figure out is how to fix it.

The answer, ironically, would probably be to start thinking small.

This past season, the team managed to find some serviceable pieces to augment the star-studded core, but only Davis, James, Talen Horton-Tucker and Austin Reaves are under contract next season. The Lakers hold a team option on Stanley Johnson and Westbrook and Kendrick Nunn both have player options they are likely to pick up.

Combined — thanks in large part to the commitments to Westbrook, James and Davis — the Lakers are in line to have about $148 million on their 2022-23 ledger, which is already about $26 million over the projected salary cap.

Said differently, outside of offloading one of Westbrook, James or Davis without taking much salary back in return, the team wouldn’t be able to manufacture enough cap space to have a competent opportunity of improving via free agency. Obviously, the club could go the route it went this past season and hand out one-year, minimum salary contracts to aging veterans, but the players who could actually make a difference for the Lakers won’t exactly be lining up to sign on the dotted line given the performance of this year’s team.

To make matters even worse, the Lakers don’t own a pick in this year’s draft. Their first rounder was sent to New Orleans in the Anthony Davis trade, while their second-round pick is owned by the Spurs.

So how does a team with no cap space and no draft picks improve?

Ask the Brooklyn Nets, and look toward the Miami Heat.

A historically frugal franchise, Miami has never necessarily found itself in the kind of salary cap hell the Lakers are in at the moment. Part of the reason why is because one of the constants during Pat Riley’s tenure has been investing heavily in scouting and player development. The same rings true of most successful small market franchises.

Players like LeBron James and Anthony Davis may win you the championship, but throughout history, it’s always been players like Alex Caruso, Kyle Kuzma and Kentavious Caldwell-Pope who get you there in the first place.

Contenders invariably unearth valuable and sometimes unknown role players and maximize those role players' talent. For example, this year's Miami team has enjoyed the combination of Tyler Herro, Max Strus and Omer Yurtseven combining to earn only about $7 million. That's about $3 million less than Talen Horton-Tucker alone. Strus and Yurtseven are far from household names, but Miami wouldn’t be entering play on April 6 as the first seed out East without them, especially considering the injuries the team has dealt with this season.

Duncan Robinson and Kendrick Nunn also go on a list that features the likes of Bam Adebayo, Mario Chalmers, Dwyane Wade and Udonis Haslem as players drafted and developed by the staff in Miami.

Some time ago, the Lakers had what looked like a competent core of young players. It’s hard to imagine that just four years ago, Brandon Ingram, Julius Randle, Lonzo Ball, Kyle Kuzma, Josh Hart and Jordan Clarkson were all teammates in Los Angeles. They’ve all come and gone, most to facilitate the arrivals of LeBron, Davis and then Westbrook.

The Lakers do have a championship to show for that roster churn, but from this point forth, the way out might actually be to go back to the drawing board. Sean Marks and his Brooklyn Nets, another franchise that Lakers VP of Operations Rob Pelinka would be wise to mimic this summer, provide a blueprint for how to go about doing that.

When Marks took over the Nets in 2016, Brooklyn was not in a good place. Kevin Garnett, Paul Pierce and Jason Terry had all come and gone, and the draft picks that became Jaylen Brown, Jayson Tatum and Collin Sexton were living their best lives elsewhere. The Nets had a bloated payroll, a team of scrubs and no future.

The NBA's Chicago Draft Combine was only two months after Marks was hired in Brooklyn, and despite not owning a first-round pick, he sent quite a contingent to the Windy City. Their directive was to do as much recon work as possible to find Marks some players who could help. Marks used Thaddeus Young to trade his way into the first round and came away from the draft with Caris LeVert and Isaiah Whitehead. Within the next six months, he signed two diamonds in the rough, Joe Harris and Spencer Dinwiddie.

One season later, Marks drafted Jarrett Allen and landed D’Angelo Russell in a trade with the Lakers, and that was essentially the core that both got Brooklyn back on track and ultimately landed Kevin Durant and Kyrie Irving.

Obviously, that all took time to come to fruition, and time isn't something that LeBron James has. But the point is that no matter how daunting the situation, a competent NBA front office can build a team without having the most obvious assets readily available. That the Lakers have two superstars should actually make the task a bit less difficult.

In this league, there are generally two types of teams: those who rely on free agency and trades to build their contender, and those who build their programs organically, most often through the draft. Big-market teams tend to be the former, while small market teams usually go the other route.

If either Marks or Riley were put in charge of the Lakers’ front office, they would probably trade Horton-Tucker for draft capital after realizing he’s not the right fit there. They’d engage the Pelicans, Blazers, Thunder, Rockets, Pacers and Grizzlies — teams who may have multiple first-round picks — and find a way to come away from the draft with a young piece and at least one more promising player from the summer circuit. Only then would they go knocking on the doors of guys like Tristan Thompson, Semi Ojeleye and Victor Oladipo, all of whom could help and potentially be had for cheap.

By the time the 2022-23 season tips off, the team could be remade. Some names we’d know, and many we wouldn’t. But as we’ve seen before, often, it’s the names we don’t know who end up making the biggest difference. Alex Caruso, anyone?

Neither DeMar DeRozan, Buddy Hield nor Kyle Lowry will be coming to save the day; Pelinka and James got themselves into their current mess, and they’ll have to get themselves out.

With their season ending much sooner than anyone could have imagined, the Lakers will have plenty to address over their long summer.

But, at least in the NBA, small steps can lead to major strides.

With few options, the Lakers should be so wise.