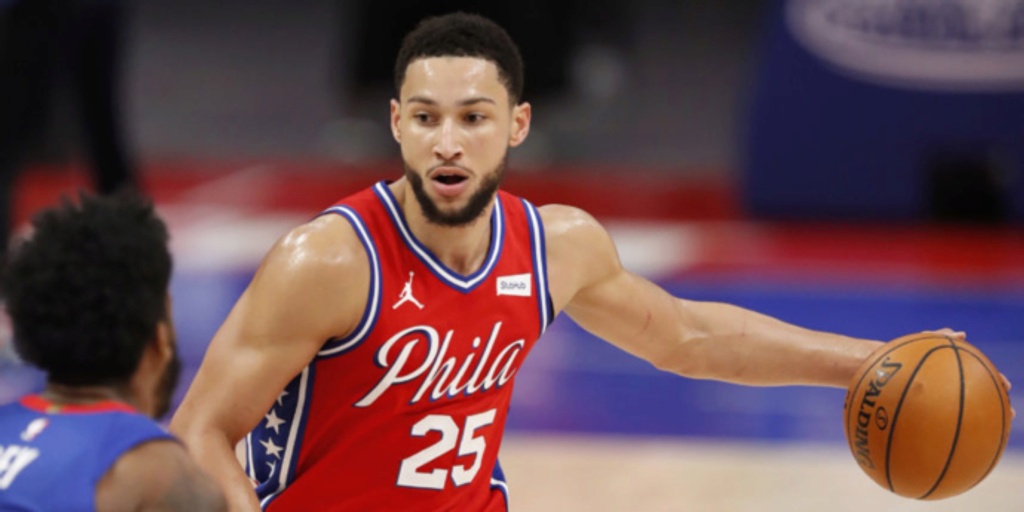 If you have League Pass or an equivalent, turn on the Sixers-Mavericks game from Thursday night. Completely ignore the box score if you haven’t already seen it -- not in a way that would spark a needless debate that has been rehashed into oblivion, but simply don’t look at it.

Get through the first three quarters. Who pops the most on your screen, and why is it Ben Simmons?

(Not that individual game plus-minus is an all-encompassing stat, of course.)

Why did I put you through that thought exercise? It’s to hammer home the notion that the analysis around Simmons -- good or bad -- has always been more about the process than the results.

It’s why taking a glance at Simmons’ year-by-year stats and concluding he hasn’t gotten better since his rookie year is faulty; it’s also partly why Simmons has underwhelmed as a number two on a team with title aspirations.

There were and are obvious limitations to his game (hello, jumper), but I’d argue the way that he played was just as much of an impediment as those limitations. This is what makes Simmons’ run in February a fun one: the process has gotten much better. Turning that corner has led to a more dangerous version of Simmons, which has helped lead to a more dangerous version of the Sixers.

If I were tasked with simplifying the biggest shift in Simmons’ game from last season to this one, I’d say that he’s driving with more purpose. There’s more verve, more oomph. That aggression shines through in transition, but also in the half-court as a driver or cutter from the slot.

Keeping up with the theme of process-related subtlety, I present to you Simmons’ driving stats, per NBA.com:

Those numbers aren’t super different in February either. There’s obvious context to add, like the fact that Simmons is playing with better spacing than he was last year. But Simmons deserves credit for maximizing his chances. Having better shooters doesn’t mean much if you aren’t creating good looks for them.

Simmons is taking his drives a little deeper than he was last season. It’s a testament to improved spacing, but also Simmons looking to compromise defenses more effectively. Take this play from last season:

This is a possession coming after a made basket. Simmons brings it up, drives to his left, pitches it to Joel Embiid while running directly into Jonas Valanciunas’ close-out path (smart!) and the Sixers get three points.

It’s relatively mundane on the surface, but it’s a “bad process, good results” possession in my view. It’s worth noting the lack of exploration here. There is a huge driving window to Simmons’ right, exacerbated by the fact that Ja Morant has his back turned to the action.

Simmons’ driving profile from last year is littered with possessions like these. Perimeter-to-non-restricted-area attacks that move the defense without truly bending it. Things ended well in the possession above, but enough of those decisions can (and did) hinder an offense that needed any additional advantage it could create in the half-court.

Compare that possession to this one against the Mavericks on Thursday:

Not a highlight play by any means, but one that shines a light on Simmons’ progression this season. Instead of stopping at the left elbow -- Embiid was open at that point -- Simmons drives to the left block. It draws the attention of Maxi Kleber and Boban Marjanovic on the drive, while also putting Tim Hardaway Jr. in a “split the difference” scenario between Embiid and Tobias Harris.

From the Mavericks’ perspective, they’re probably okay with the half-stunt from Hardaway Jr. and ultimately letting Embiid fire. Harris is a more dangerous shooter. But again, it’s about the process: Simmons didn’t just generate an open three, he drew two defenders and forced a third to rotate.

That type of aggression, and tapping into it early, has led to better opportunities for himself later in possessions.

This is ultimately bad off-ball defense from Josh Richardson, but Simmons deserves credit for forcing the issue. He had already established himself as a downhill threat a couple of possessions prior; that threat ultimately garnered extra attention. Seth Curry was able to attack a scrambling Richardson, and Simmons made himself available by hanging in the dunker spot.

Of course, Simmons can and has taken matters into his own hands with this newfound mean streak. He’s a freakin’ menace once he builds a head of steam. A common theme from Thursday night’s win was setting screens a little higher so he has more space to drive into. But even when those screens are set lower, Simmons has been more intentional about powering through whatever cracks are available.

Simmons has also looked more comfortable on the block this season. He isn’t doing it as often -- 9.3 percent of his possessions have ended via post-up this season, per Synergy, down from 11.3 last season -- but he’s hammering dudes whenever he taps into that well, ranking in the 88th percentile as a scorer.

He can use quickness and guile to beat like-sized defenders:

Or straight up punk smaller dudes that get in his way:

Even minor shifts in Simmons’ approach -- taking an extra dribble to touch the paint, lowering the shoulder a little more often -- has made all the difference. That’s been reflected in the per-game numbers: Simmons is averaging 20.7 points, attempting 7.3 free throws, and posting a 65.8 True Shooting percentage in February.

If Simmons is suddenly a 21-8-8 guy like he’s been this month, the Sixers would certainly take that development. But even if some of those numbers regress, the aggression must remain for Simmons and the Sixers to be the best version of themselves.