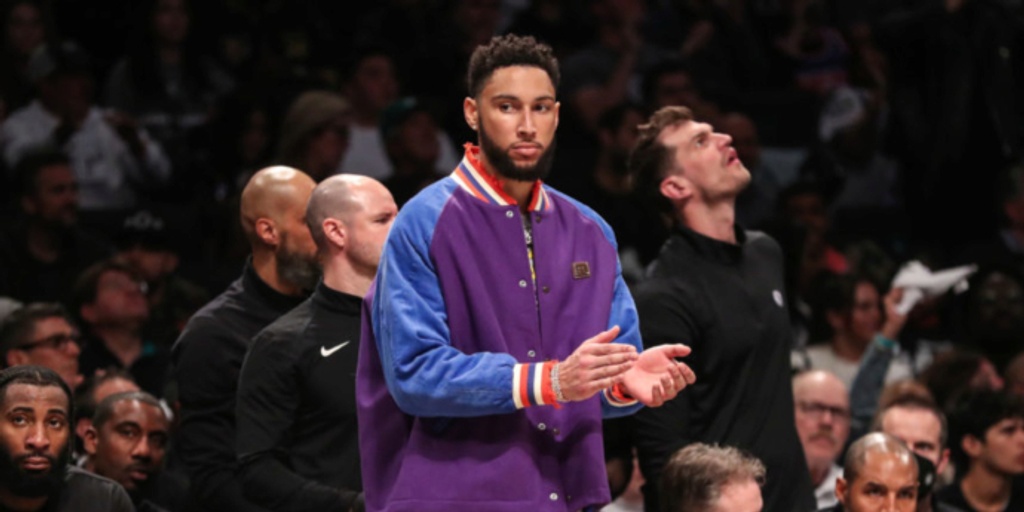 Ben Simmons' Brooklyn no-show was more predictable than we thought

Back injuries are incredibly common in professional sports, particularly in the NBA. But just because they’re common does not make them easy to overcome — and Ben Simmons can attest to that.

Simmons is a big, dynamic playmaker whose defensive versatility and speed set him apart from the vast majority of guards in the NBA. And, right or not, the Brooklyn Nets were relying on Simmons to contribute in their first-round playoff series against the Boston Celtics.

After a number of reports suggested a Simmons comeback was imminent, we now know that was not meant to be.

The media didn’t help, as rumblings surfaced that Simmons was pain-free following a practice and could return to the team as early as Game 3. Simmons didn’t help his case either, and at one point beckoned to ESPN's Nick Friedell to film him dunking the basketball after a recent practice.

We don’t necessarily know why Simmons didn’t play in the Nets’ first-round series. Maybe he suffered a setback, or maybe he wasn’t as healthy as we were led to believe. Per The Athletic's Shams Charania, his mental health was also a major factor.

But while reports about his potential availability misled many of us, Dr. Rahul Shah, a world renowned, board-certified orthopedic spine surgeon, cautioned against getting too excited from the very start.

“Simmons received a shot a few weeks ago,” Dr. Shah told BasketballNews.com in a Zoom interview in late March. “If you’re not seeing him practice, warming up with the team, 3-on-3s — if he’s not doing that, you can be pretty certain he’s not getting the relief he needs.”

We last saw Simmons on the floor in the 2021 Eastern Conference semifinals, but he sat out of this season's training camp in hopes of pressuring the Philadelphia 76ers to trade him. The Sixers didn’t relent... at least not quickly.

Simmons' hold-out cost him 54 games (and approximately $20 million, over which he filed a grievance in early April), and on Feb. 10, he was finally traded to Brooklyn.

As mentioned earlier, Simmons dealt with mental-health issues for the entirety of the 2021-22 season and possibly longer. It was initially reported by ESPN’s Ramona Shelburne that Simmons “will continue to work with his therapist to get mentally ready to play in Brooklyn.” But there was no mention of a back injury — at least not initially.

One of the main challenges in understanding where Simmons was in his recovery as of a week ago was that the injury wasn’t proactively reported. Even Nets head coach Steve Nash seemed unclear on his status for much of the time following the trade.

Nash referred to Simmons’ back injury as “a little soreness” in late February. In mid-March, he had “extremely high hopes” that Simmons would return in the regular season. But in late March, Nash finally conceded that “someone” had reported that Simmons had a herniated disc.

Was Nash being intentionally coy? Or was he truly unaware of the extent of Simmons’ back issues?

It’s worth mentioning that Simmons has a mostly uneventful injury history as it relates to his back. The most recent occurrence was when he missed nine games with a nerve impingement in February 2020, but there have been no reported complications since.

Something clearly happened between June 2021 and February 2022.

Dr. Shah told BasketballNews.com that herniated discs typically require three-to-six months for a full recovery. Could Simmons have really injured his back after being traded? Or just before?

It’s possible, but not relevant.

Regardless of when it happened, we can probably blame Simmons' hold-out for much of it. Training camp and the preseason are important to warm up for a relatively long season. Getting back into shape after skipping training camp and preseason and missing months of a season is nearly impossible — even for someone as athletic as Simmons.

Even worse, Simmons’ injury could have long-term implications for the Nets.

With Simmons having received an epidural shot in mid-March, Dr. Shah walked BasketballNews.com through the process and timeline of a typical recovery from a herniated disc.

“Shots are one step before surgery, and that’s why Simmons was having shots,” Dr. Shah explained. "If that doesn’t work, why not? It can be because it’s the wrong problem, but it can also be that more has to be done. Typically, with surgery — when you go to that area — you identify where the disc is pressing on that nerve. You go in and basically trim down the area; you just remove a small portion. But if you’re torquing on that area, there’s a chance that more disc can come out.

“So, you want to limit risk as much as you can. You want to always take the least amount of risk, but sometimes it’s not enough. This operation is very effective but there is a 5-to-15% chance of more disc coming out in the future.”

Dr. Shah also explained that, while surgery is generally successful, the risk it presents leads many people to try rehab and shots first.

“People return to twice as many games and play for twice as long with the surgery than without it,” Dr. Shah explained. “But there is a risk with it. And that’s why most people don’t go with it immediately.

“So, for Ben Simmons, the likelihood of him needing this kind of surgery is probably reasonable, maybe 60% or 70%. And the real question is, ‘Can he return back and play at the highest level with the shot?’ If he can’t, you have your answer.”

While the Nets’ season is done, Simmons could have decisions to make that will directly impact his ability to play next season. Granted, Simmons’ mental health is at least equally important as his physical health, especially to him; but if Simmons’ is to be successful, his back must be healthy.

According to the Mayo Clinic, a diskectomy — a surgical procedure to remove the damaged portion of a herniated disk in your spine — requires at least 6-to-8 weeks of recovery time. For context, Dwight Howard was expected to miss 2-to-3 months following a microdiscectomy in late 2018, and Mike Dunleavy was projected to miss 8-to-10 weeks in 2015 following the same procedure.

Simmons and the Nets have about five months until the start of training camp. So, while he technically has some time, Simmons should make a decision regarding how he'll proceed sooner than later.

In a recent HoopsHype podcast with the Daily News' Kristian Winfield, Mike Scotto said the Nets hope Simmons can guard an opposing team’s best player on any given night, regardless of position. In other words, in a given (hypothetical) week, Simmons will be expected to guard the likes of LeBron James, Ja Morant, Luka Doncic, Giannis Antetokounmpo and more.

That is a very tall task for any player, but it’s downright impossible if said player has a lingering injury — especially in his back. And given what was given up to get Simmons to Brooklyn (and the fact that most teams around the league want nothing to do with him at the moment), the Nets have to hope he'll bounce back to his old self.

It might seem crazy, but Ben Simmons is still only 25. He truly could have a decade or more left in the NBA. Hopefully he's able to overcome all of his challenges — physical and otherwise.