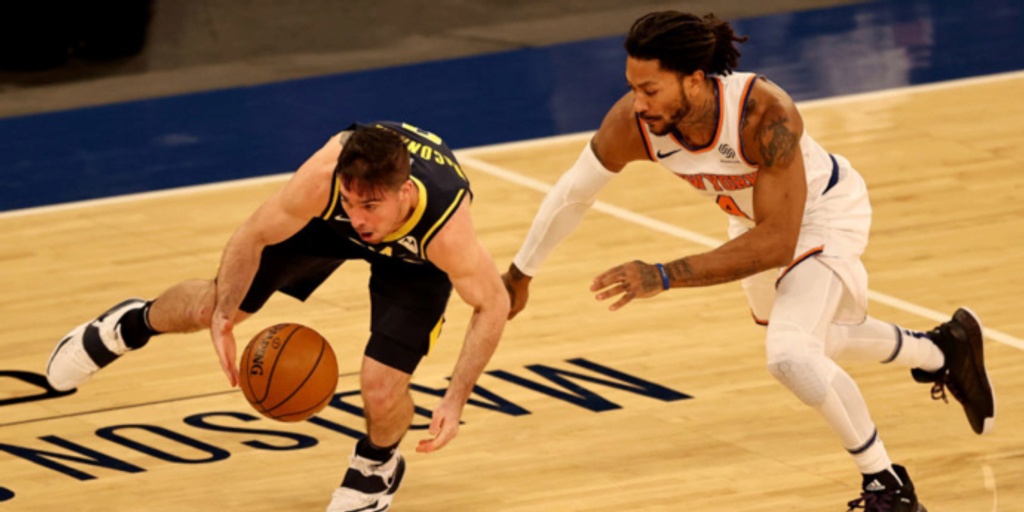 Any NBA fan could tell you that Bradley Beal leads the league in scoring, that James Harden ranks No. 1 in assists and Clint Capela is the top rebounder. Those are the statistics that everyone pays the most attention to.

But our job here today is to take the stat game to a different level.

You know what kind of players coaches like? Guys who draw charges and get deflections and steals. They also like guys who don't turn the ball over, guys who box out and guys who challenge shots.

All of those things are charted by coaching staffs and by the stat geeks at NBA.com -- one of whom is kicking my keister in our fantasy league. I had the misfortune of drafting Bogdan Bogdanovic, who leads the league in dollars spent per rehab minute.

But if I told you that the league leader in steals, deflections per game and loose balls recovered per 36 minutes is a guy who does not even start for his team, could you name him?

He is T.J. McConnell of the Indiana Pacers, who comes off the bench behind Malcolm Brogdon and makes a living being a pest for 25.3 minutes per game. He leads the NBA with 2.0 steals per game and 2.0 loose balls recovered per 36 minutes, as well as in deflections per game (3.9). He also ranks second to the Philadelphia 76ers' Matisse Thybulle in deflections per 36 minutes (5.7 to 5.6).

Last Wednesday vs. Cleveland, McConnell became just the sixth player in NBA history to record a triple-double with steals and the first to do so since 1998. He also became the sixth player in history to shoot 100% from the floor and finish with a triple-double. He ended up one steal shy of tying the NBA record of 11 steals in a game, jointly held by Kendall Gill and Larry Kenon.

“He’s got that look in his eye every night. He puts a lot on himself. He wants to do very well… He makes great plays just because he’s trying so hard and I love that about him,” coach Nate Bjorkgren said of McConnell, who went undrafted in 2015 and has stayed in the NBA since then through sheer hustle. “It’s just his constant effort and no quit. He wants to do everything he can for this team and the players really love playing with him.”

McConnell ranks ninth in the league in assist-to-turnover ratio (Tyus Jones of Memphis leads the NBA at 5.21) and is 11th in steals-to-turnover ratio (Thybulle ranks first with 3.54). Only Fred VanVleet of Toronto has more total deflections (128 to 126), and he is tied with Ben Simmons and Giannis Antetokounmpo in loose balls recovered per game (1.4).

Another stat that coaches love (and that fans generally ignore) is contested shots. Blocks get all the publicity, as Myles Turner and Rudy Gobert can attest, but contesting a shot often makes it difficult for the shooter to convert, and nobody does is better than Brook Lopez of the Milwaukee Bucks.

Lopez leads the league by a lot in contested shots per game, with 632 to Gobert’s 541. That helps make up for his lack of rebounding -- a talent that starts with boxing out.

Bam Adebayo of Miami is 14th in the league in rebounding with 9.5 per game but leads the NBA in box-outs with 166 (he is followed by Steven Adams of New Orleans with 144 and Enes Kanter of Portland with 143). Mitchell Robinson of the New York Knicks, though, leads the league with 5.6 box outs per game, while Kevon Looney of Golden State leads in box outs per 36 minutes with 6.7.

Montrezl Harrell of the Lakers and Kyle Lowry of the Raptors are tied for the league lead in charges drawn with 14 apiece, and Domantas Sabonis of Indiana leads the league in screen assists with 243.

On the negative side, Russell Westbrook of Washington leads the league in technical fouls with 11 (among coaches, Nick Nurse of Toronto leads with 5), while there is a four-way tie for most flagrant foul points between Kentavious Caldwell-Pope of the Lakers, Brandon Ingram of the Pelicans, Sabonis of the Pacers and Lowry of the Raptors. They each have three.

The anti-flopping rule calls for a $5,000 fine for anybody caught doing it twice, and nobody has achieved that benchmark. Players with one flopping violation are Kristaps Porzingis of Dallas, D.J. Augustin of Milwaukee, Buddy Hield of Sacramento, LaMelo Ball of Charlotte, LeBron James and Kyle Kuzma of the Lakers, Mason Jones of Houston, Robin Lopez of Washington and Gary Trent Jr. of Portland.

Surprisingly, repeatedly flopping can be a lot more expensive than mouthing off and getting T’d up.

Analytics are fun to some people, and this article is for that crowd.