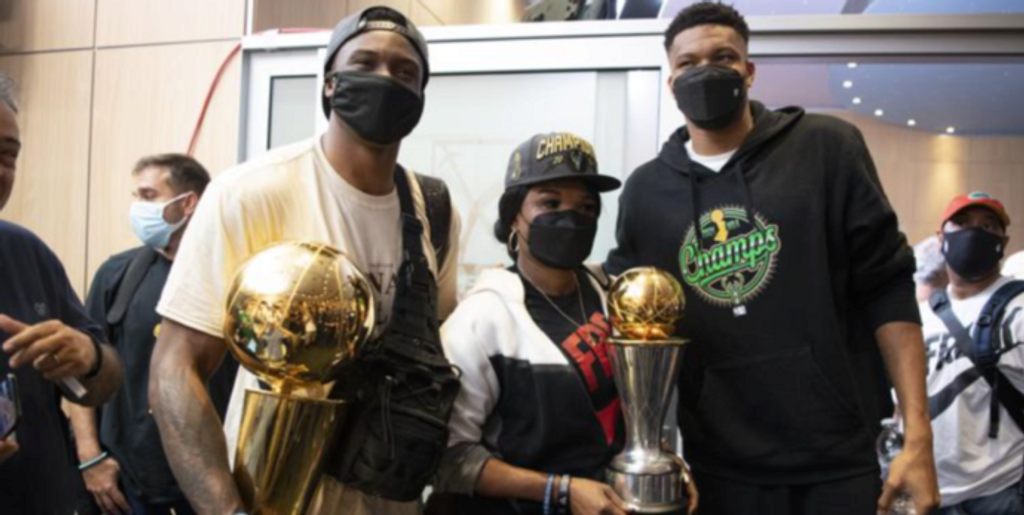 ATHENS, Greece (AP) — Giannis Antetokounmpo definitely had something to declare on his triumphant return to Greece on Sunday.

The NBA star carried the Larry O’Brien Trophy with him at Athens International Airport and said he hopes to win more titles with the Milwaukee Bucks.

“We are happy to be back and that we could bring the trophy with us,” Antetokounmpo said at a news conference at the airport.

The 26-year-old “Greek Freak” sat next to the gleaming NBA championship trophy, along with his NBA Finals MVP award and his brother, Thanasis Antetokounmpo, 29, who also plays for the Bucks.

“We had to go through a long process (to bring the trophy to Greece),” Giannis Antetokounmpo said. “We don’t know how many days we will stay, but we will take it with us to the places we grew up, to Sepolia and Zografou.”

Sepolia is the Athens neighborhood where the Antetokounmpo brothers grew up. Zografou is the Athens suburb where Giannis began his basketball career at a local club, Filathlitikos.

Antetokounmpo has always returned to Sepolia, where he has maintained ties with the few people who at the time openly welcomed the children of poor African immigrants from Nigeria. Thanasis and Giannis were born in Greece — in 1992 and 1994, respectively — as were their younger brothers, Kostas and Alex, but acceptance as Greeks was not always easy.

The Antetokounmpo brothers plan to return to Sepolia during their current trip to show the trophies to local kids who, like many other Greeks young and old, now idolize them. Especially Giannis.

Antetokounmpo said that event will be for the benefit of children, not the media. He and his brother will also play a little basketball at a local open court, though his opponents shouldn’t be too worried.

“I’ll play as long as my knee can carry me ... not very much,” Antetokounmpo said, adding that children who want to attend should wear masks.

Asked about his first title, Antetokounmpo said the celebration “did not last long. I want to live this again” with another title. “To continue getting better, stay hungry, stay winning and live such moments with Milwaukee and the Greek national team. This feeling of winning is addictive.”

Antetokounmpo added that part of his desire to win is “because I’m a people pleaser. I want to win for (son) Liam, my mother, my family, my friends, for Greece.

“I might win the next title next year, or three years from now. But even if I never win another title in my life, I will still be OK, because that will have been God’s plan.”

Giannis and Thanasis are not the first Antetokounmpos to win an NBA championship. Younger brother Kostas, 23, did it first with the Los Angeles Lakers last season, although his contribution was limited. Kostas will play next season with French club Villeurbanne.

After a short stay in Greece, Giannis will return to the United States, where his girlfriend, Mariah Riddlesprigger, is expecting their second child later in August.