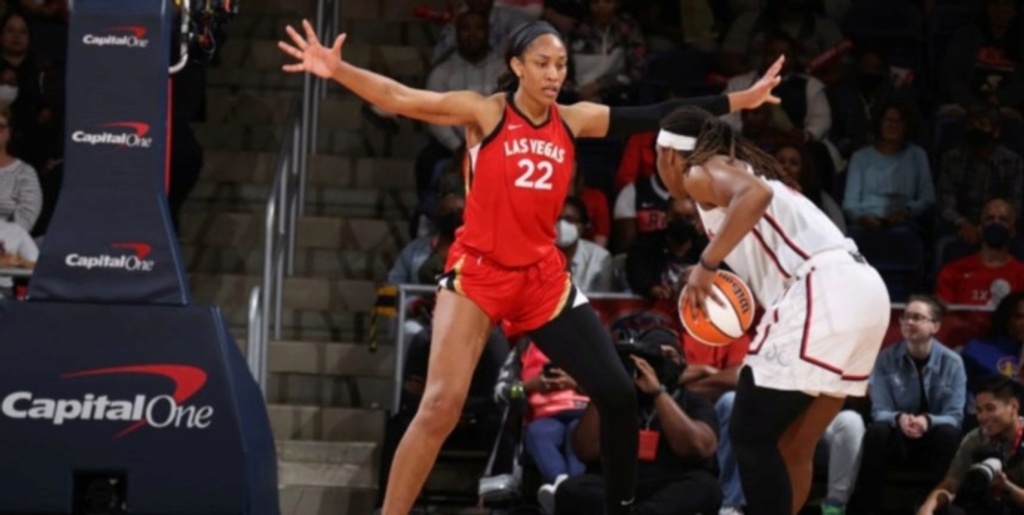 The Atlanta Dream lept out to a surprising 2-0 start to the season, their best start since 2017, spurred on by the play of rookie Rhyne Howard. Their defense has been cohesive, transition play has sparked their offense and the veterans they brought in via trade and free agency in the off-season have provided a rock-solid foundation.

The Aces simply had other plans Friday night.

Vegas flattened out much of what the Dream wanted to do out of ball screens, switching the majority of actions not involving the five spot, something they've done routinely this year. With former starting center Liz Cambage now a member of the Los Angeles Sparks, the Aces have restructured and shifted to Wilson as a member of the starting five.

The Aces are certainly smaller, but they've made up for it with activity and aggression on ball screens. If Wilson is facing a good interior presence, the weak-side defender digs into the post, and the rest of the defense rotates accordingly. It's a more strenuous brand of basketball, but the Aces are embracing it, something head coach Becky Hammon pointed out after last night's win.

"We're small, [Wilson[ is at our five, so we gotta scrap, and they've all really bought into not making anything easy, especially post catches," Hammon said. "Her alertness as to what's going on in the paint has been sensational. I told her, she's gotta be Tim Duncan for us, she's gotta be Draymond Green for us, where she's talking constantly and sniffing out anything that comes through her paint, and she's bought in and done a fantastic job... she's been senasational

Wilson often plays up to the level on screens, making it difficult to dice up the defense from the middle of the floor. Seemingly half of Wilson's blocks have been on jump shot contests when she plays at the level.

Through four games in 2022, Wilson has 15 blocks, a stellar mark, and the league leader by a longshot. She blocked 55 shots her rookie season in 2018, the most she has in her career, and she did that over 33 games. She's been expert not just at getting the rejections, but at keeping the ball in play. After going back through all her swats, roughly half of them directly resulted in a transition opportunity. It sounds minor, but it's a minute skill that can make a significant difference.

It would be unfair to expect her to keep up this pace all season, but the hot start is a notable and palpable change in her defensive approach. Hammon repeatedly has mentioned Wilson's "buy-in" on the defensive end. The activity is ratcheted up and setting the tone for the Aces.

"We've got to scrap. We're scrappers, and that's something we missed against DC (The Mystics)," said guard Kelsey Plum. "That was something that needed to be in the forefront tonight, so I was really proud initially when we came out. We had a ton of energy, we're rotating, boxing out, we're getting in transition, and that's when we're at our best."

They're getting out in transition and playing with pace often. Per HerHoopStats, the Aces are 7th in pace at 84.5 possessions per 40 minutes, right around average. Don't let that fool you, however, as the league-high pace in 2021 was 83.8 possessions per 40 minutes by the New York Liberty. That would rank only 9th this current year. It'll be interesting to see how that does or doesn't level out as the year goes on, because teams are flying.

The Aces' ability to get stops and create turnovers (they are 1st in blocks per game) has been essential in kickstarting their already potent offense.

This possession is such a great example of the Vegas defense and Wilson's impact. There aren't many bigs in the W who provide the coverage versatility and instincts that she does, allowing the Aces to get a little funky and aggressive.

A'ja shows and recovers on the first pick and roll, allowing Jackie Young to release from her high tag early to get back out to Sue Bird in the slot. Bird calls for the ball screen in an empty corner from Ezi Magbegor. Wilson angles herself well to both recover or contest the shot as Young chases overtop and Magbegor quickly rolls off the brief screen. Bird throws the pocket pass, Wilson recovers and gets the block with her off hand before taking the ball up in transition herself.

In the event that a screen is more solid and it's harder to chase over for the point-of-attack defender, Wilson shows and recovers once the chaser regains connection, or she will outright peel switch if it's called for. The communication from the Aces in general has been impressive.

While the offense of the Aces has taken the league by storm early, the defense is tethered to its success. How Vegas continues to mesh and workshop on that end will be fascinating to keep up with throughout the season. Can they keep playing such a small rotation with this frenetic play style? How will it hold up against more stout post presences? Right now, it's hard not to feel good about the state of the Aces' defense, due in part to the improved defensive play of star A'ja Wilson.