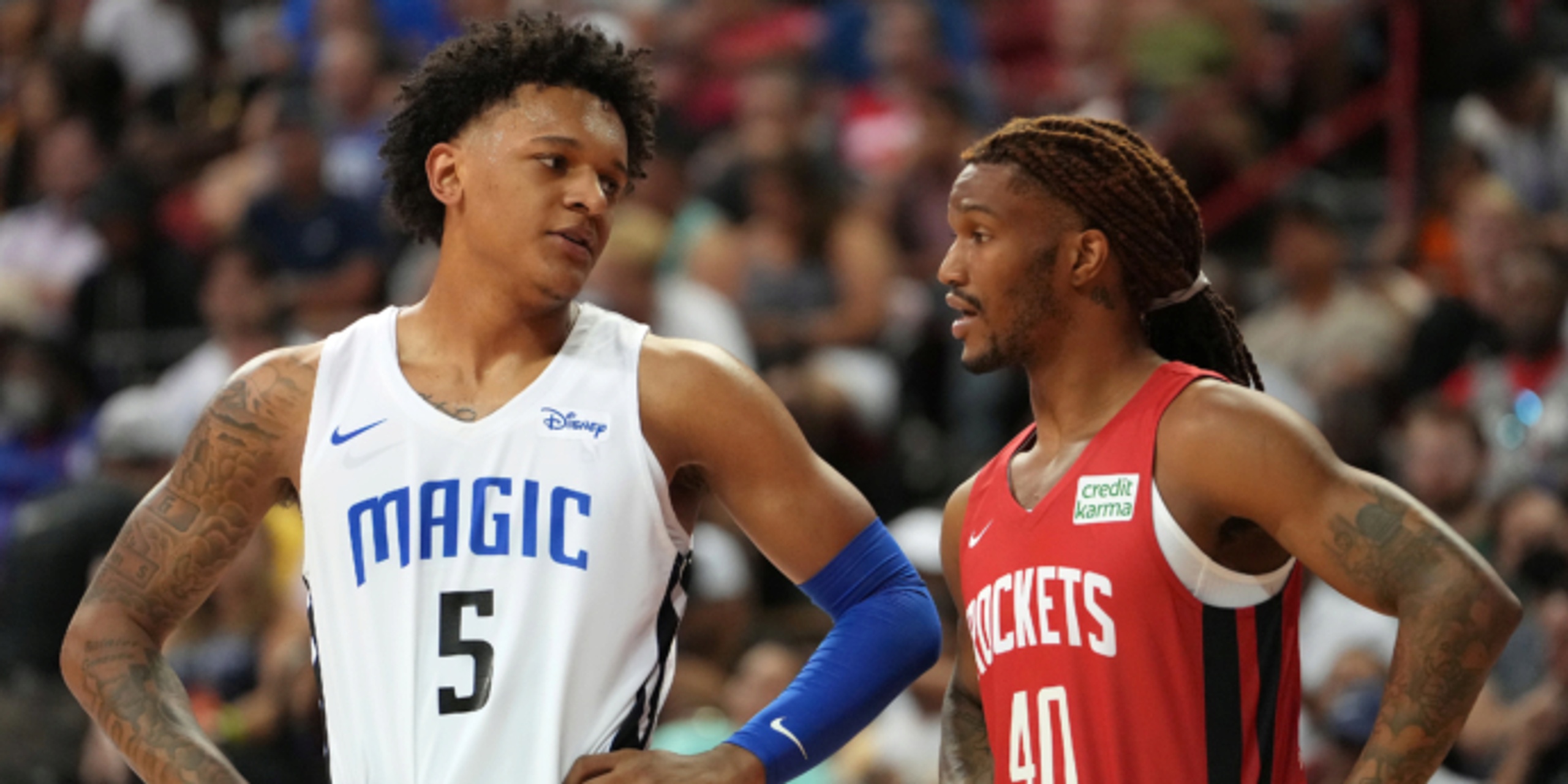 Las Vegas Summer League is off and running!

East Coast viewers might have missed the start, with two games scheduled at 10 p.m. on Thursday and midnight on Friday. But the two contests featured high-powered matchups between top draft picks, plus some surprise standout rookies and second-year studs.

I'll be rounding up the best and worst performances from every day of Summer League in Las Vegas. As always, here's a reminder: This is summer basketball and not the actual NBA season. We're obliged to critique the individual games of young players; firing off bold, career-spanning takes on guys who are in their teens or early 20's is highly ill-advised.

But let's get excited! Here's who caught my eye from the two contests that kicked off the Las Vegas slate.

This was a fun pass from Paolo Banchero to Devin Cannady pic.twitter.com/HyiKRuIt5g

Magic fans want Banchero to be an "offensive hub." For most of Friday's win over the Rockets, the top pick was, balancing seeking his own shot with facilitation. Banchero hit an impressive step-back three, demonstrated his prowess in the post and bullied his way to the basket, often unassisted. But he also kept the ball moving, and it mostly felt like he played within the flow of the offense.

If there's anything to nitpick, I do think Banchero settled too frequently for difficult post-up shots and threes later in the second half. But Orlando also fed him loads of on-ball reps, so there will be growing pains. Overall, a very strong debut from this draft class's headliner.

Caleb Houstan 🇨🇦 drops a GAME-HIGH 20 PTS (7-12 FG, 5-9 3PT) in his Summer League debut as the @OrlandoMagic come away with the WIN! pic.twitter.com/DZ4YGttsyF

The No. 32 overall pick in this year's draft took over the latter stages of Orlando's victory. Houstan leaned on his calling card throughout high school and college, and unleashed his smooth three-point shot. The former Michigan Wolverine knew exactly how to space the floor in transition and the half-court, and it felt like he was almost generating his own open looks with how he moved without the ball. By the end of the game, Orlando had even run plays for its second-round rookie.

Houstan also impressed me as a cutter. Despite getting blocked on one attempt and Orlando's passers missing some of his other slashes, Houstan exhibited excellent timing when he sliced to the basket.

Keon Johnson leads all scorers with 20 PTS on ESPN pic.twitter.com/w5Dr85nPek

Johnson slowly started to rise in the lost spring of Portland's regular season after being acquired from the Los Angeles Clippers in the Norman Powell trade. He particularly intrigued me as a second-year player who could enter Las Vegas and blow people away with his improvement. Johnson didn't quite reach that level on Friday, but he still gave me several reasons for optimism.

His 21 points came in varied contexts. Johnson used some ball-screens to set himself up for three-point attempts. He grew more aggressive as the contest went on, igniting fast breaks and hunting players off the dribble. Isaiah Stewart blocked Johnson ferociously on one drive, but Johnson came back later in the game and attacked him with a strong layup.

There's still plenty to iron out with the 2021 No. 21 pick; he telegraphed a few turnovers and hijacked a couple of late offensive possessions. But Johnson's confidence seems so much higher than last year's Summer League, and I feel great about what he could show over the next 10 days.

Goddamn, this opening set from Detroit is an absolutely perfect usage of Jaden Ivey and Jalen Duren. Awesome. pic.twitter.com/3JdKRLt3Bo

The above first play had viewers giddy with visions of Ivey working off-ball screens, receiving passes from, say, Cade Cunningham, and throwing lobs to Jalen Duren. We saw Ivey take on serious spacing responsibilities, particularly in the first half with Killian Hayes or Saben Lee at point guard. Though he missed some threes, Ivey generally looked comfortable and knocked down two as well.

In the second half, the No. 5 pick settled into more of a groove driving the basketball. He used his all-world downhill speed to split and blow by defenders. He threw some beautiful passes as the game started to wind down. This was by no means a perfect first outing; Ivey sometimes played out of control and lost the ball or threw up a wild shot. But all of the flashes that made Detroit so happy to select him were present.

Stewart didn't have the loudest performance, but I thought he was super solid in several areas of Detroit's victory. After knocking down 15 threes in all of 2021-22, he confidently hit three as a pick-and-pop player, trailer and spot-up spacer. He switched onto several tough guard matchups and held his own, including one phenomenal block on the aforementioned Johnson drive. Showing this versatility on both ends gives Stewart a firm place with Detroit's young core, even as it continues to grow with more lottery-level additions.

Smith lost the battle of top-three picks to Banchero on Thursday, and that makes his night look like a dud outing by comparison. He didn't have the three-point shot falling, and was often outmuscled by Banchero and other defenders when he couldn't turn a corner and drive.

However, I don't think this was a concerning performance by any means (that also should not be possible in Summer League). Smith had two nice takes to the basket as shown above. He generally played solid team defense next to Eason. Hopefully, Houston can get him some more shots from the perimeter so Smith can truly demonstrate his marksmanship.

Hampton was a player I highlighted who needs to have a standout showing Summer League. He did not on Thursday.

Though the rebounding total looks nice, Hampton's offensive performance often felt disjointed and disconnected from the rest of the Magic. He spent possessions searching around for a shot, didn't create separation and had some cringey misses. Hampton had some moments where his burst and athleticism shone through, but they came few and far between against an impressive Rockets defense.

He just didn't hit many passes he needed to make, either. The above play, for example, should have been an easy swing or kick-out, but Hampton quite literally charges into a turnover. I hope he can turn things around, but this start was inauspicious.

At Summer League, players get 10 fouls, and it's rare to see someone actually use them all up. Schofield was testing the limit early, though, finishing with 7 infractions. By my count, two resulted from poor defensive positioning, three were just a bad use of his hands and a fourth was a blatant push on Jabari Smith Jr. Schofield is battling for his NBA future as a second-round pick from 2019. This wasn't his best case for a spot with Orlando.