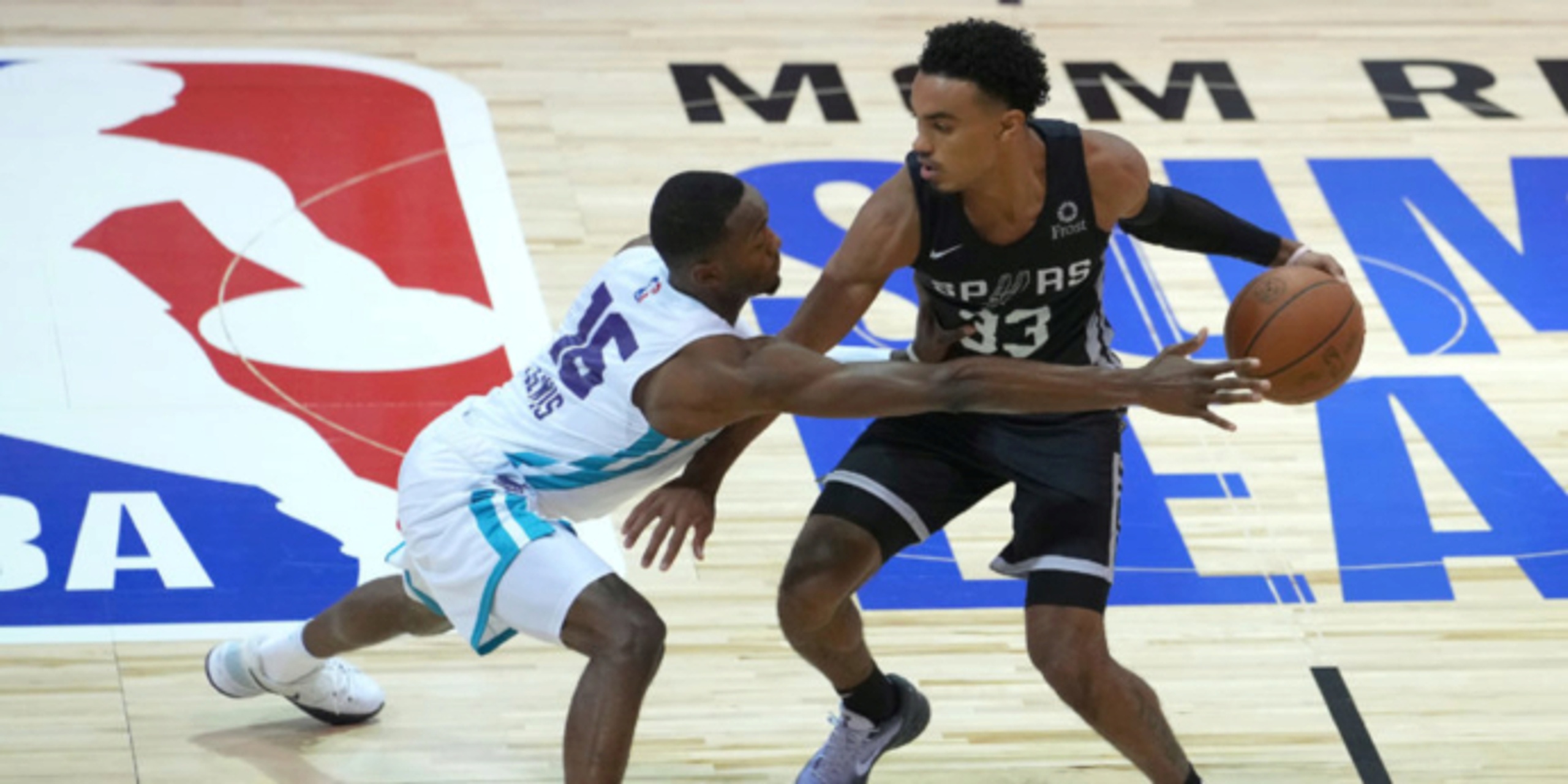 Studs and duds from the fifth day of NBA Summer League

At the halfway mark of 2021 NBA Summer League, we're seeing prospects rapidly adapt to the next level. In some cases on Thursday, players visibly evolved over the course of a single game.

Rookies like James Bouknight and Cam Thomas turned frustrating first quarters into dominant performances. Other veterans continued to show their overall grasp on the NBA. We saw two more games reach overtime, underscoring what has been a competitive slate so far.

Below are the studs and duds from Day 5:

TRE JONES GETS IT TO GO! #NBASummer on ESPNU pic.twitter.com/UkiNhTrqMU

This was arguably the most dominant performance of NBA Summer League thus far. Jones was in complete command on the offensive end, beating players off the dribble, pulling up in the mid-range and dishing all sorts of impressive passes. He pushed the ball in transition and consistently pressured the defense in what became a close shootout.

In the closing seconds, Jones scored the go-ahead bucket on a tough layup, and then stole the ball from Vernon Carey Jr. to ice the 106-105 win over Charlotte. Simply a masterclass from the second-year point guard.

Absolutely filthy hesi from James Bouknight as he finishes this lay high up off the glass!! pic.twitter.com/8Z7LyWSUZM

Thursday's matchup against Tre Jones and the Spurs was a challenge. Bouknight felt the pressure early, and played hesitantly for a large portion of the first half. But I was thoroughly impressed with how he adapted. The 2021 lottery pick found his confidence and got to his spots off the dribble. He also consistently forced the defense into tough spots when he attacked the basket.

Bouknight floored me as a passer as well. He should have finished with double-digit assists; on multiple occasions, such as one fast-break blunder, teammates blew impressive dimes from the rookie guard. Bouknight also finished with zero turnovers — even more amazing when considering his usage.

A game-tying bucket followed by a one-legged three to win it in sudden-death! pic.twitter.com/8mdLLqD1HY

Thomas did not play his best 33-plus minutes of basketball on Thursday. He started off by forcing a lot of shots, not looking to beat defenders or pass. But towards the latter stages of the game, the rookie guard seemed to see the floor better, make the right decisions and find his shooting touch.

Of course, he canned two monster buckets to end things — one three to send the game to a sudden death double-overtime, and then the golden shot. That microwave potential is the way Johnson can earn immediate playing time off the bench for the Nets.

Undrafted rookie Sam Hauser proving he belongs in the league.

This was a statement game for Hauser, who had sputtered out of the gate with the Celtics. The sharpshooting forward looked like his Virginia self, drilling threes off the catch as part of a team-wide hot streak. He also moved the ball much better compared to his prior two contests, helping Boston set a summer league record with 33 team assists. Then, on the defensive end, he seemed to keep defenders in front of him and shuffle his feet well. Good showing from the Celtics' two-way signing.

Two years ago, Ishmail Wainright played in the German 2nd division finals. Now he's under the contract with Toronto Raptors. The first time @Wainright24 stepped on the court straight from the airport, his coach Buzas saw his success was all programmed: https://t.co/R83Dwkv3Mb

Wainright may be an unheralded name to most; the 26-year-old forward played for Baylor until 2017 and spent 2020-21 playing with Strasbourg in France. But people who tuned in surely will remember the name. The 6-foot-6 wing was engaged on both ends, made quality shots and did not force himself into the action. it was a poised all-around performance, and it makes sense why Toronto has Wainright signed to a two-year contract.

My play of the night:

Maxey didn't have his three-point shot falling Thursday night and bricked a couple of bad looks. But otherwise, the slashing guard displayed his signature ability to get to the rim at will. Maxey also had a couple of nice pull-up jumpers and step-backs he used to mix things up. And he finished off a 96-88 overtime win against Atlanta by clamping up Sharife Cooper in the closing seconds.

The Bulls only scored 59 points as a team, and there were a couple of dud-worthy performances that came from Chicago. Dosunmu had a hard time gaining separation from the Timberolves defenders and didn't get many quality looks at the basket. As a defender, he got shaken often and was hit with some bruising screens. It didn't seem like Dosunmu was involved in the offense; he often stayed on the wings and in the corners.

Eight of Simonovic's 10 points came at the charity stripe. The 21-year-old was otherwise effective for most of the game, and didn't play with the strength and physicality necessary in the paint. He was not particularly impactful as a screener, and in the second half was part of a team-wide collapse defensively.

Unfortunately, Mudiay's summer league play is reminiscient of his last seasons in the NBA. The 25-year-old did post a threat offensively and was inconsistent defensively. His shooting form is still an issue. He does not command the offense like a five-year NBA veteran should at this stage. The veteran trio of Mudiay, Michael Beasley and Kenneth Faried have been collectively underwhelming, and it's hard to feel good about their NBA comebacks right now.

The entire Magic squad was frigid in the 108-71 loss to Boston. Hampton was no different, but he seemed to seal his fate with his shot selection. The second-year guard often drove headstrong into crowds and finished poorly. He's not the type of guard who probes and gets to his spots around the court while keeping his head up. I'd like to see Hampton take his time a bit more, although in fairness, he's probably third in the pecking order for facilitation duties behind Jalen Suggs and Cole Anthony.

Nnaji has appeared seriously out of sorts offensively in summer league. The 2020 first-round pick just does not have a consistent post move he can go to in the half-court, and coughed up five turnovers in large part from being unable to create anything on his own. Nnaji is now 0-for-10 from long range in his two games played. There's no sugarcoating it: the offensive game is a mess right now.