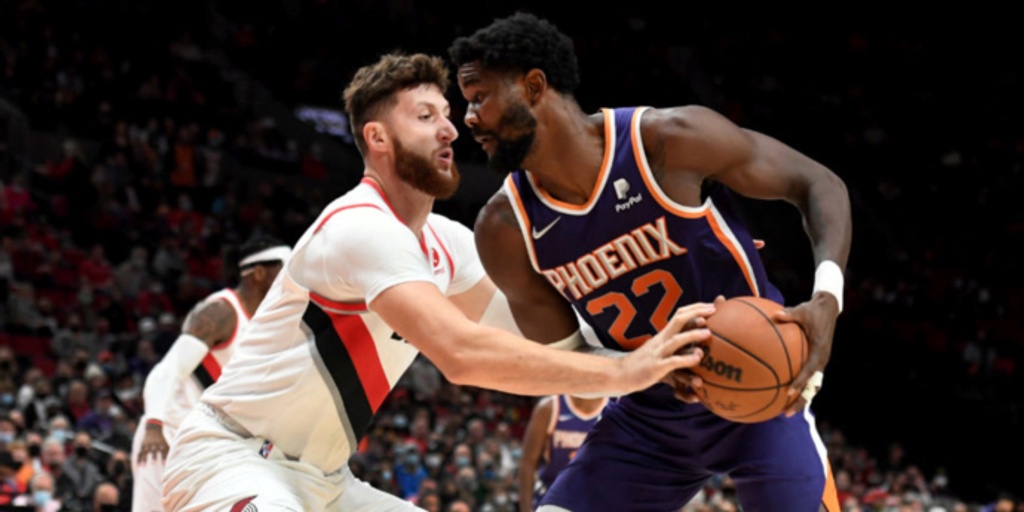 After ranking the best guards and forwards set to hit the open market, let's complete this series by highlighting the top-10 big men up for grabs this summer.

Deandre Ayton is the crown jewel of this year's free-agent center crop. Although the Suns surprisingly chose not to offer him a max extension last offseason (worth approximately $173 million over five years), Phoenix is still in the driver's seat, as the franchise can match any offer the former No. 1 overall pick receives this summer. Expect them to do just that for a young, improving player who is a foundational cornerstone of a team with championship aspirations.

After a disappointing 2020-21 campaign, Jusuf Nurkic bounced back impressively this season, averaging 15.0 points, a career-high 11.1 rebounds, 2.8 assists and 1.1 steals while shooting 53.5% from the floor. Nurkic has been sidelined by plantar fasciitis for the past month, and will likely miss the rest of the season. However, he'll likely be ready to rock by the start of training camp next September. Due to Nurk's tight bond with Blazers point guard Damian Lillard, many pundits expect Portland to re-sign the big man to a multi-year deal.

The Knicks technically have until June 30 to ink Mitchell Robinson to an extension worth up to $48 million over four years. However, the two sides have not yet reached an agreement, so it appears Mitch Rob will be able to test the market for his services. While he has flashed All-NBA Defense upside in short spurts throughout his four-year career, Robinson has battled numerous injuries and baffling inconsistency. His regression at the free-throw line (he's shooting below 50% in each of the past two seasons) is obviously worrisome as well. Nevertheless, few big men can supply the type of high-flying athleticism and rim-protection he brings to the table.

With Brook Lopez sidelined for most of the 2021-22 season, Bobby Portis stepped in and stepped up for the Bucks, starting 57 of the team's last 58 games. He is averaging career-highs in scoring (15.1 points), boards (9.1), steals (0.8), blocks (0.8) and made three-pointers (2.0). Portis is currently one of only two players in the NBA averaging at least 9 rebounds and 2 made treys per game. (Luka Doncic and Karl-Anthony Towns are the other two members of this club.) Portis' player option for 2022-23 is only worth $4.6 million, so he is expected to opt-out and search for a significant raise.

Zubac is a bonafide firefighter for LAC. In one possession he

1) traps Trae 28 ft out
2) sprints towards Capela hands up to dissuade the pass to the roller
3) checks Capela and stops the Collins drive
4) gets in front of Capela as the shot goes up and wins the glass battle pic.twitter.com/OjS3dxuz4P

Ivica Zubac's team option for next season is $7.5 million, so it's an easy decision for the Clippers to pick it up. He just turned 25 years old last week and continues to improve steadily. Zubac is posting career-highs in just about every statistical category this season.

Montrezl Harrell has had another productive and efficient season off the bench, averaging 13.8 points, 6.5 rebounds and 2.0 assists, while shooting 63.9% across 62 games for both the Wizards and Charlotte Hornets (following a midseason trade).

After struggling mightily over his first three years in the NBA, Mo Bamba, the sixth overall pick in the 2018 draft, is enjoying the best year of his pro career. He is on pace to become the first player in Magic franchise history to average more than 1.5 blocks and 1.0 made three-pointers per game over an entire season. However, the Magic inked center Wendell Carter Jr. to a four-year, $50 million contract extension back in October and have Mo Wagner (brother of their prized rookie, Franz) under contract next season as well. In addition, lineups with both WCJ and Bamba have not performed well. Thus, Orlando will likely let the former lottery pick walk if another team offers a contract the team is uncomfortable matching.

Nic Claxton continues to impress in limited playing time off the bench for Brooklyn. His per-36 minute averages this season are outstanding: 15.2 points (on 65.1% shooting), 9.6 rebounds and 2.0 blocks. The Nets have limited depth due to the high salaries of their top players, and billionaire owner Joe Tsai is unafraid of paying the luxury tax, so Brooklyn is expected to match any reasonable offer Claxton receives.

Andre Drummond has increased his value following the trade that sent him from Philadelphia to Brooklyn. He has started all 14 games he's played as a Net, and is averaging 11.4 points (on 62.5% shooting), 9.6 rebounds and 0.9 blocks for Brooklyn. Drummond can boost his value significantly with a strong showing in the playoffs.

Thomas Bryant inked a three-year, $25 million deal back in 2019 and played very well for the Wiz during the first year of that pact, averaging 13.2 points, 7.2 rebounds and 1.1 blocks in under 25 minutes a night. He also started the following season impressively before tearing his ACL in early 2021. Bryant returned to action in January, but has seen his minutes reduced following Washington's acquisition of Kristaps Porzingis. Still just 24 years old, Bryant could be a worthwhile investment for a team in the market for a young big.

Best of the Rest: