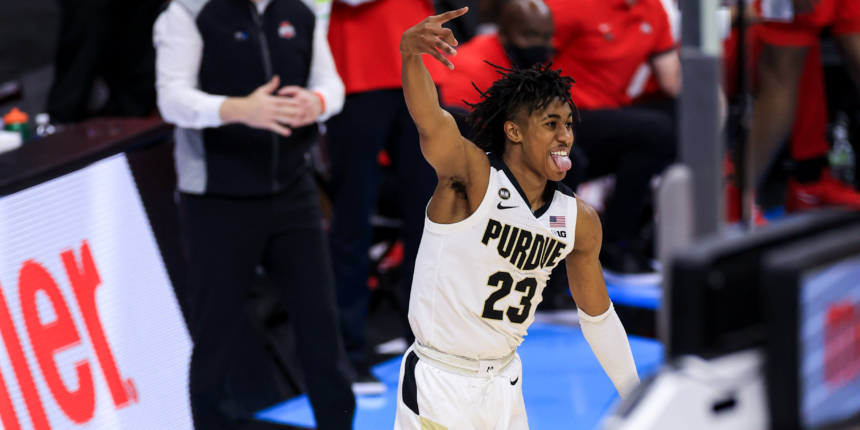 Earlier this week, we looked at the ACC. Today, we'll break down the top NBA prospects from the Big Ten:

Bottom Line: Caleb Houstan, a five-star recruit for head coach Juwan Howard and the Michigan Wolverines, is a high-level outside shooter, potentially a marksman, that possesses positional size at 6-foot-8. Considering Houstan's size, shooting mechanics, shot-making ability and versatility — to go along with solid defensive intelligence — many expect him to step in and produce at a high-level right off the bat during his freshman season this year in Ann Arbor. Houstan is widely projected at this point to be a lottery pick in the 2022 NBA Draft.

Bottom Line: After being named to the 2020-21 All-Big Ten Freshman Team, Jaden Ivey led the United States to the U19 FIBA World Cup Gold Medal. Ivey is a great athlete and relentless defender who has flashed elite potential on the defensive end of the floor. Offensively, Ivey had an inefficient freshman season, shooting just 39% from the field and 25% from deep. Even so, he showed the ability to create space for himself and score on multiple levels, and seems to be poised for a breakout year with the Purdue Boilermakers.

Bottom Line: Keegan Murray has the potential to be a terrific glue guy, and has the tools to be a legitimate NBA prospect. At 6-foot-8 with a 6-foot-11 wingspan, Murray has a high motor and does a lot of the “little things'' that contribute to winning, and he is a terrific defender. Despite shooting an inefficient 29.6% from deep last season, Murray shows promise as a shooter. In addition, his ability to attack close-outs and score from multiple levels lend hope to a greater offensive load. Murray’s development is certainly something to keep a close eye on.

Bottom Line: Curbelo enters his sophomore season with a chance to be one of the best point guards in the Big Ten. With his creativity and flashiness as a facilitator, he averaged 9 points and 4 assists per game last season in 21 minutes per game. The biggest concern for him going into this year is his three-point shooting. He hit only 5 of 31 attempts last year, a lowly 16%. If he is able to improve as a shooter, and continue to provide on-ball value on both ends of the floor, he could have a breakout season.

Bottom Line: Although he is a bit undersized for the position, the Buckeyes often use Liddell as a 4/5 in their lineups. He is physical and versatile on both ends of the floor, scoring both inside and out. He appears more comfortable in the mid-range and paint which works well for his college system, but raises questions in regards to his translatability to the NBA. Last year, Liddell scored 16.2 points and gathered 6.7 rebounds per game. He plays with great effort and toughness, and with increased scoring prowess as a junior, Liddell could carve out a spot for himself in the 2022 NBA Draft.

All praise due to the Point God: Chris Paul is at it again
yesterday
MORE:
NBA Draft

Knicks sign Luka Šamanić to two-way contract
Many are sounding Laura Ingraham-ish with criticisms of Kyrie Irving
