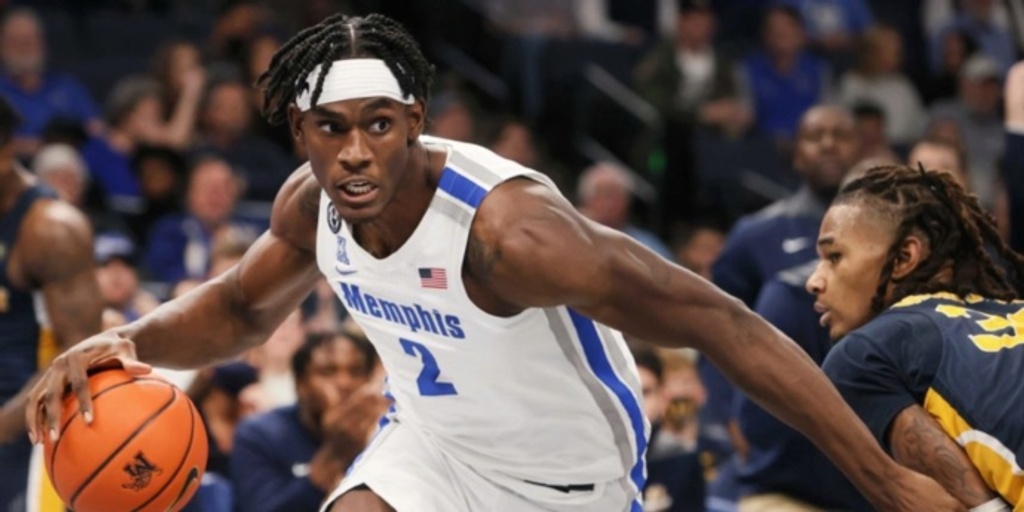 Dwight Howard, Bam Adebayo, DeAndre Jordan. When the chiseled 6-foot-10 Jalen Duren comes crashing down on dunks, these are some of the names that are evoked in scouts' minds. Duren, a former 5-star recruit and current freshman at Memphis, has been a consistently positive force for the Tigers in a season that's been full of ups and downs. His immense physical tools and stand-out athleticism have had him on the prospect radar since he was a freshman in high school. Thus far, Duren has not disappointed, as he's been high on the big boards of scouts, teams and draft analysts alike.

From Delaware to Florida

Duren, a native of Delaware, began both his AAU and high school career with Pennsylvania roots. Duren played up with Team Final (PA) as a middle schooler. He competed with their 15-and-under team — showing no problem thriving in a league two age groups up, as he is such an overwhelming physical force. During his middle school run with Team Final, Duren blew up on the national radar, sparking a frenzy from high schools looking for the right to have him don their jersey. Duren decided upon Philadelphia's Roman Catholic High School, a program that has produced the likes of Rasual Butler, Brad Wanamaker and Lamar Stevens. The future Memphis Tiger linked up with a future LSU Tiger, Justice Williams, at Roman Catholic. During his first year with the private school powerhouse, the duo rolled their way to a historic Philadelphia Catholic League title. Duren brought home All-State honors following a strong debut season.

Duren's sophomore effort looked to be much of the same, as Roman Catholic seemed to be rolling their way to a third consecutive title, until the COVID-19 pandemic abbreviated the season. Duren and Williams opted to transfer to Montverde Academy for their junior seasons. Competing in the new National Interscholastic Basketball Conference (NIBC), the duo joined a team loaded with high-major talent. Montverde recorded a dominant 24-1 record, in which Duren earned All-American honors. Montverde reaffirmed their spot atop the high school basketball ranks with a national championship.

In August of 2021, Duren made the surprising decision to reclassify, in conjunction with fellow top 2022 recruit Emoni Bates. The pair of consensus 5-stars pledged their college careers to the Memphis Tigers and head coach Penny Hardaway in the same week. Bates and Duren finished fifth and sixth in the recruiting rankings respectively, and gave Memphis a consensus top-2 recruiting class in the country. The addition of the two 5-star recruits and fellow top-50 player Josh Minott to a veteran-laden Memphis team landed the Tigers at the pre-season No. 12 spot in the country. The Tigers opened the season 6-0, featuring wins against St. Louis, Western Kentucky and Virginia Tech. Duren averaged a double-double — 13.2 points and 10.0 rebounds per game during their run, while also adding 4.2 blocks per game. This impressive stretch included a dominant 22 point, 19 rebound outing against Western Kentucky's 7-5 Jamarion Sharpe. Duren was a physical monster, beasting a talented Hilltoppers squad at every turn.

After peaking at No. 9 in the rankings, Memphis hit quite a bit of turmoil, as a fissure began to form in the locker room following a string of losses. In an interview with The Athletic, Penny said, "We've got so much negativity in our locker room with veterans being jealous. Everybody's trying to get to the NBA off the ranking we had, but nobody is willing to sacrifice minutes, touches, anything. It's been miserable. You can imagine what a 17-year-old is thinking as he's trying to figure it out." Duren has remained positive for the team despite the turmoil, averaging 9.2 points, 5.7 rebounds and 1.8 blocks per game. I recently saw Duren take on the Central Florida Knights in a game that wasn't highly contested, as Memphis struggled.

Pregame, Duren warmed up and stretched largely individually. He came sporting a very quiet, "I'm about my business" demeanor in which he was locked-in and wasn't particularly jovial. Duren was most impactful defensively during the game, where he registered 3 blocks and was an intimidator in the paint. Offensively he struggled to get into his groove in a game where the Tigers were severely short-handed (only 7 players played, as Jayden Hardaway got injured early).

Despite a volatile year for the Memphis program as a whole, Duren's draft stock has remained relatively unchanged, as he is still a likely top-10 pick on any reasonable draft board. Additionally, Duren's physical tools have buoyed his draft stock — he is a top .001% type of athlete.

Our Sr. Draft Analyst Matt Babcock shared what he has seen out of the 6-foot-10 freshman this season:

"At 6-foot-10 and 250 pounds of muscle to go along with a 7-foot-5 wingspan and good athleticism, Jalen Duren possesses impressive physical tools. He's also a capable passer with a higher skill set than what one might initially expect. Also, remember that he's supposed to be a high school senior this year. However, he chose to reclassify to attend Memphis a year early. It is yet to be determined how high he'll be selected exactly — and I am concerned with his selective motor — but I feel comfortable with the idea that he will likely be the first true big man to come off the board on draft night."

Duren currently sits at No. 6 on the BasketballNews.com 2022 NBA Draft Big Board.