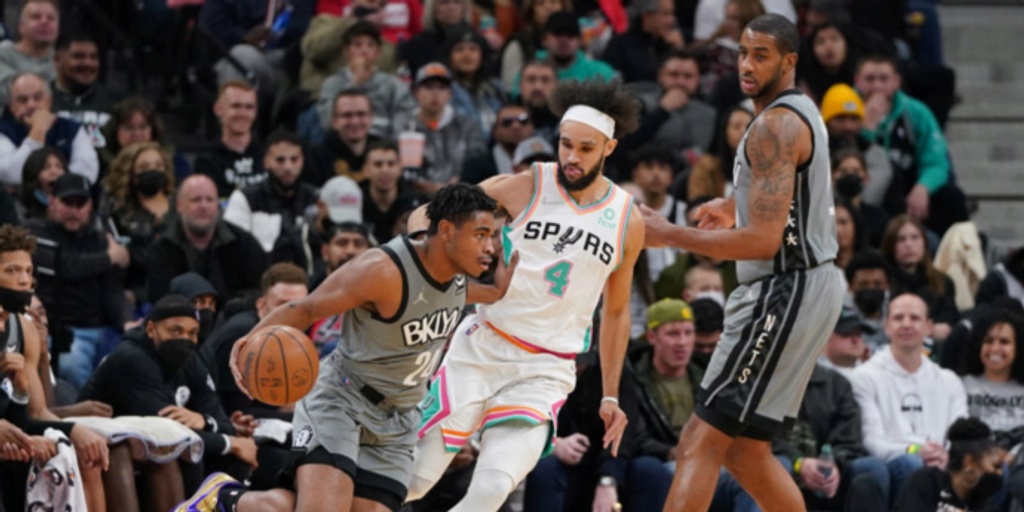 What exactly DO the Brooklyn Nets have?

I have a terrible habit of going to the grocery store without a list, something my mom's scowled at me for since I was in high school. I'd pick out all the coolest brands I could find, parse through the best produce, and by the time my mom was rummaging through the family's food for the rest of the week, I'd be getting an earful about how I spent $143 without actually being to construct a meal for four. Planning has never really been my thing.

"You bought rice, oyster sauce, and chicken, but no veggies or eggs to actually make stir fry!"

And that sentence my friends, sums up where I'm at with the Brooklyn Nets at the moment. Few contenders have flummoxed me more than Brooklyn this season, as I routinely feel a push-pull among the Nets' line-ups and roster construction that I've found intriguing since free agency ended.

The Nets have shuffled their guys minutes a lot this year, with injuries and illness often forcing changes. Lately, rookies Kessler Edwards and Day'ron Sharpe have been getting an opportunity. pic.twitter.com/xlwWKGSCwI

Inconsistency is the new consistency for the 21-22 Nets, as Tom Bassine shows.

(He makes tremendous data visualizations and is a great dude, strongly recommend following him if you don't already.)

The Nets are tied for first with the Lakers in total number of different starting lineups used this season (22), and while they have certainly been impacted heavily by injury and COVID absences, so have the majority of the teams in the league.

The struggles to blend the roster existed prior to Joe Harris' injury, which only complicated matters a bit further. With Kevin Durant now out for roughly the next month, things get a bit murkier.

Brooklyn started the year winning with staunch defense, as they sought to work out the kinks of the offense and James Harden's post-injury rust. While shot-luck and variance was notably in Brooklyn's favor early in the year, their seventh ranked defense up until Christmas wasn't a mirage. Outside of the top two and sometimes three stars that Brooklyn hinges upon, the roster is built largely with a defensive-slant. However, with Kyrie Irving's return, and continued efforts to help James Harden find his rhythm, Brooklyn has leaned more heavily into some of their offensive role players and shifted rotations.

The Nets are second in offense since Dec. 26, but also have plummeted to 27th in defense over that same stretch per Cleaning the Glass.

So much of this revolves around their frontcourt. I wasn't fully sure what to make of the team prioritizing the 4 and 5 spot as much as they did, and in the way that they did this offseason, but I was intrigued nonetheless. They built out a big rotation full of utility, but the versatility seemed questionable and we've seen how that has played out.

Paul Millsap never really got the run I was hoping for, but he also just didn't quite play well enough to warrant a bigger role. But, that's part of the issue. So many of the Nets' frontcourt players can play positive NBA minutes, but finding ways to play them together and get them all going — while maintaining a modicum of stability in lineups — has been an adventure.

Let's just run through some things that have been weighing heavily on my mind thinking about this team.

Blake Griffin not being last year's Blake Griffin really hindered this team early, and took away one of their few guys they could rely on as a short-roll playmaker, shooter, screener, and dribble hand-off operator. He's been better in the new year, but he's hitting 26% of his threes since entering the rotation again in early December, and defenses are playing him accordingly. He was absolutely scorching against Milwaukee in the playoffs — and they were still pretty comfortable sagging off or late contesting him. Without defenses giving him solid close-outs that he can attack, it's a lot harder for him to get the most out of his skill set at this stage, so TBD on Blake as part of the rotation.

Starting the season without Kyrie and subsequently losing Joe Harris has been extremely destructive for Bruce Brown's role this season. His floater hasn't hit in quite the same way either, partially due to the spacing of the team. I'm not inside Steve Nash's head, but he has seemed overall a bit reluctant to rely on Brown as a release valve, do everything quasi-big — again influenced by the spacing issues already present. But really it's a confluence of events that have been both vexing and frustrating from a viewing perspective.

"We don't have the spacing required to play him!"

"But, what about his defense and finding a way to get him going again?"

"We need to get three bigs on the roster going too!"

Outside of Harris, Irving, Durant and Mills, there is one player on the roster shooting above league average from three on one or more attempts per game (Kessler Edwards). Harden is shooting below average from three, but is still defended like he's shooting 45% from deep. Irving only plays in half the games, Harris is out as previously mentioned; the team routinely has two non-shooters on the court.  More importantly, their players who aren't shooting well are guarded like it, which matters more than the percentages to a degree.

Last season, Bruce Brown was playing in lineups with Irving, Harden, Harris and one of Jeff Green or Blake Griffin (41% and 38% three-point shooters on volume). It was a much more inhabitable environment for a fringey, margins-based offensive player — and that environment just doesn't exist right now.

Add in Bembry who has had some really quality stretches, but largely brings the exact same things as Brown: ball-handling, some playmaking chops, perimeter defense and opportunistic scoring.

It's not as simple as saying "pick one," but to an extent, it feels like Brooklyn needs to prioritize which player they most believe in, in the rotation moving forward. The offense has opened up a bit more, and it's just so difficult to actually make the duo work together when there's really only room for one of them.

Rolling, Screening, and Lobs Oh My

One of the trends I've absolutely loved to follow over the past few weeks has been the budding chemistry between James Harden and rookie Day'Ron Sharpe. Sharpe is already the best and most dynamic screener on the team, in regards to his ability to screen open teammates, run DHO's and flow into the lane after setting solid screens.

Despite it looking better and more consistent lately, James Harden's burst has just not routinely been what it was. Setting screens that actually generate separation and give him a runway are huge in the success of his pick-and-roll possessions. Sharpe is capable of that, making decisions on the roll with the ball, and is solid around the rim. However, he doesn't quite give Harden a lob threat (he can catch lobs, but he needs to load up first), which makes it easier for opposing bigs to get into his grill and play up on him in coverages.

It's a small gripe, but it's noticeable and makes me question a bit what his playoff utility might look like — if there is any this season for him. I've quite liked his defense and activity as well, just a really fun player, but again, his emergence makes things murky for Brooklyn again!

Nic Claxton had a really rough stretch to start the year, missing the entirety of November. Now he's out again with a hamstring injury. But he may be the most important big on the roster. His ability to not just switch on defense, but switch with purpose at a high level, unlocks what proved to be one of Brooklyn's most important looks in the postseason.

His offense has largely been lobs and putbacks, but he started to really put together intriguing stuff as a decision-maker in December and early January, looking the part of a starting center for Brooklyn. Claxton had 14 assists in 9 games from Christmas Day to Jan. 10 when he was injured, a small number and sample size. However, 14 assists is 22% of his career totals and tracked with what was visible on the court — much improved decision-making and some capability to dish the ball on the roll.

Another clip in the bag of short roll Nic pic.twitter.com/Dc8VgD8vUr

This is a minor showing in a major area, one that's vital for Claxton unlocking himself as a roller, and in helping to smooth out the offense when he's out there. Whether or not he can continue to execute in that area once he returns is huge for his ability to solidify his rotation spot, and paper over some of the roster inflexibility.

So where does that leave the Nets?

Durant, Harden and (sometimes) Irving are of course locks in the rotation. Patty Mills has cemented himself as has LaMarcus Aldridge, although his utility in the playoffs is probably going to be match-up dependent to a degree. Joe Harris is a lock when he returns from injury and Claxton likely is as well.

Kessler Edwards has already solidified his spot in my mind, as he's capable of linking together lineups in a way that very few players on the roster are capable of right now. He moves the ball, will take his threes (and make them at a high level), and plays very good defense with size at the 3 and 4 spots.

His flashes have been extremely encouraging, and I'm not really sure how his blend of skill and size don't keep him from playing 20+ minutes per game the rest of the regular season. While I'm unsure how to feel about a rookie being a 7th or 8th man on a contender in the postseason, he's playing well enough at the moment to really make you go hmmmm.

Outside of that, I'm just not really sure what to make of this team's rotation, and I'm not sure Steve Nash does either considering how much tinkering he's been doing throughout the season.

(Not at all to discredit him, I think he's done a very good job this year; this is such a hard roster to figure out.)

Cam Thomas really looks to be a year or two away barring some substantial growth as he gets comfortable operating off the ball. James Johnson does wily veteran things and is a capable defensive option when switching everything, but he has similar offensive drawbacks to Brown and Bembry. I have loved the David Duke Jr. experience, but he's not there yet consistently as a contributor on offense. Outside of a stretch in November, Jevon Carter's jumper has just died and I have no idea what happened there.

I'm just not really certain where the Nets go to figure out who they are as a playoff team. We know they can slant towards defense as Kevin Durant and James Harden shoulder the load at home. We know they can run opposing teams off the court with shot-making when Irving plays away games. How do they figure out a way to blend the two — and can they, given the personnel on the roster?

The best version of the Nets last year found themselves in the playoffs. It's fair to reason that the Big 3 will be more locked in and active defensively come playoff time yet again (James Harden, please move your feet, or contest, or something), but they need to find their backbone before then.