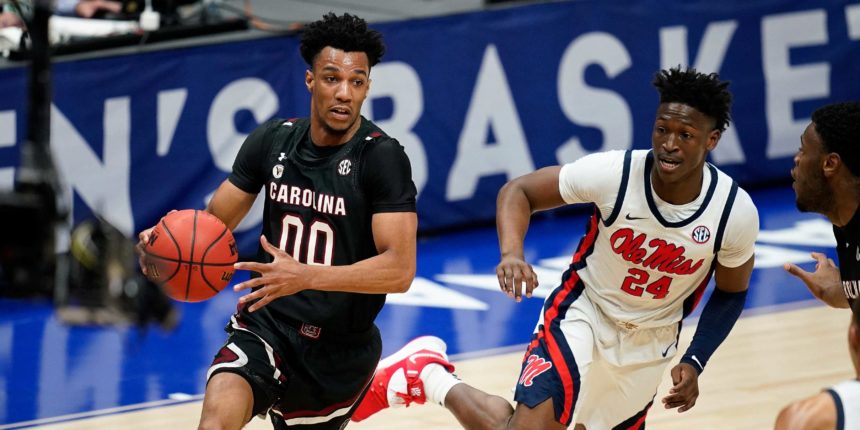 A.J. Lawson Q&A: 'I still feel there’s not 30 guys better than me in this draft'

Now, Lawson is ready to take his talents to the NBA, and he's hoping to hear his name called tonight.

BasketballNews.com caught up with the 21-year-old to discuss his game, which NBA players he studies, the sacrifices he's made to get here, the best advice he's ever received, his off-court interests and more.

A.J. Lawson: "I feel like the process has been going amazing so far. My first time going all the way through it. Right now, I’ve just been enjoying myself, having fun. Being on the road so much, definitely get a little fatigue, but that’s why you gotta take care of your body. I feel like I’ve been doing a good job with that. Each workout I’ve been going through, I’ve been having high energy and learning through each one. Throughout this whole process, it’s been helping myself out more by just going hard and playing the best I can."

What are some things you wanted to prove throughout this process in interviews and workouts?

"The misconception is [that] people think I’m just a 3-and-D guy, but I definitely can defend, I definitely can shoot, but I’m also more than that. I feel like I’m a playmaker, too. I can do a lot more things on the court. Whatever coaches want me to do, I can do it, I feel like."

Who are some NBA players that you’ve studied over the years?

Lawson: "I definitely studied a lot of the Canadians like Jamal [Murray], Shai [Gilgeous-Alexander], Andrew Wiggins when he was coming up. The whole quarantine I was watching the whole [Michael] Jordan documentary when it came out, [and] watching Kobe [Bryant] and Scottie Pippen."

Lawson: "Off the court, I’m going to bring positive spirits, great energy. I’m always going to be that guy that brings positive vibes into the locker room, so you’re never going to have to worry about a guy that’s going to bring the team down. I’m always going to elevate a team with my personality and my spirits. Off the court and in the locker room, they're just going to have a guy who’s willing to work. A good teammate that’s there for the players, and then just a workaholic. I’m going to be in the gym all the time trying to get better, and I feel like teammates are going to love me for that."

Has it sunk in that you could hear your name called in the NBA Draft?

Lawson: "Man, it’s definitely sinking in. I’ve been thinking about this every day. (laughs) I’m just blessed to be in this position, because not a lot of people make it this far. I’m just happy to be where I’m at. If I hear my name called, I’m still going to be working."

Can you speak to the sacrifices and everything that got you to this point?

Lawson: "There’s tons of sacrifice. Starting way before I even got to college, like high school when I was just an underdog. I felt like I didn’t even hit my growth spurt until grade-10. A lot of the work happened beforehand. Waking up at 5:00 in the morning in high school to work out with my coach at LA Fitness, then going to school. After practice, studying film, putting up extra shots, working on my body. There’s so many things that people don’t know, a lot of behind-the-scenes stuff that I’ve put in. I feel like I’ve done a lot, just for my body, watching film, working on my game. There’s a lot of work that has been done."

What are the biggest areas of your game that you still feel like you have to improve? What’s a weakness in your game?

Lawson: "For me, I got a skinny frame. I have to work on getting my body a little bit stronger. I feel like I definitely am strong, but I just feel like I need to put on some more weight, so I can handle the physicality of the NBA. I want to work on my consistent shooting. I feel like I’m a good shooter, but I just want to make it more consistent to be a knockdown shooter, of course. Also, I want to work on my ball-handling so I can make plays with the ball and feel comfortable with it."

What are some of your off-court interests?

Lawson: "Definitely trying new foods, eating out. I like watching movies. Hanging with friends. I play video games sometimes. That’s basically what I do. If it’s not basketball, that’s probably what I’m going to be doing. [Or] on my phone, talking to family because I’m never really home like that."

What’s the biggest thing outside of basketball that’s motivated you?

Lawson: "Something that’s definitely motivated me is definitely my parents (Kathleen and Anthony). Growing up, seeing them work as hard as they did, trying to provide for me to eat, to [let me] play the sport. They were always going to AAU tournaments. They’ve been working their tail off, being blue-collar workers to try to provide for me. That’s my motivation right there. I owe them the world right there. And I just love the game, so I want to make something out of it."

What’s the best piece of advice you were ever given?

Lawson: "The work will always come to light. Growing up, I always had to work hard. You never see immediate results. Keep working hard. It will pay off one day. That’s probably the best advice, because the work will pay off eventually."

What would you tell an NBA GM if they walked up to you and asked why they should draft you?

Lawson: "I would tell them I’m a high-character man that can bring positive spirits to the team. I can come in and defend 1-through-3. I can shoot the ball. I can make plays. I’m great in transition. And I’m ready for whatever task you put me in. I’ll do the best I can, and even more than need be."

You mentioned earlier you felt like an underdog. Do you still feel like you’re an underdog who doesn’t get the credit he deserves?

Lawson: "Oh, for sure. I’m always going to play with that chip on my shoulder. I always feel like people overlook me, but I feel like as things come closer to the draft, people are starting to buzz more on my name. But I still work like I’m an underdog. I still feel there’s not 30 guys better than me in this draft. I’m going to keep playing like that, like there isn’t."