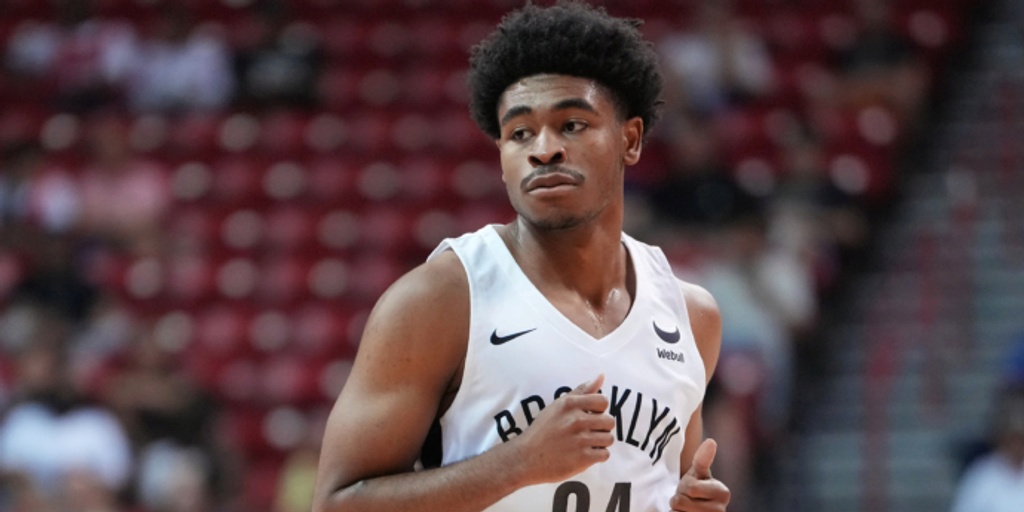 Leave it to the NBA to add some drama to a setting where wins and losses don't matter.

Cam Thomas, one of my studs for Sunday's roundup, left some very interesting comments after he scored 26 points against the Philadelphia 76ers.

Reporter: "I was talking to your coach Steve Nash & he's encouraging you to look for your shot & your teammates"

Cam Thomas rolls eyes "It is what it is"

And in the final game of the evening, we even got a fan fistfight! What a bizarre environment.

I saw one dud performer from Saturday bounce back with a phenomenal game on Sunday. Several 2021 draftees, and one undrafted 2021 classmate, also showed out in Las Vegas. Here's who stood out to me from another frenetic day of young hoopers.

No. 4 overall pick Keegan Murray was HOOPING today for the @SacramentoKings 👑

He dropped 23 PTS and 3 AST pic.twitter.com/EkqkTkIbFy

The fourth overall pick has already flexed his long-range muscles, so his lukewarm day from deep struck me less than the rest of his offensive impact. Murray went 3-for-4 inside the arc. His makes came via a mid-range floater, a slipped screen he took all the way to the rim and a backdoor cut he used to finish strong through contact.

Though he only had 3 assists, Murray's passing also caught my eye. His first assist resulted from attacking a closeout, recognizing the help defense and kicking back out to an open Frankie Ferrari. Murray caught another transition pass in the first quarter that was too late for a layup, so he swung it along the baseline with his right hand to Keon Ellis, who drained the corner three. It feels like most of Summer League offense is coming easy to Murray so far when he isn't facing too much physicality.

I don't even think this is a foul, but Cam Thomas does such a fantastic job of making it a tough decision for the refs.

And when he does take contact, he is strong enough to get most shots up on the rim and convert many into makes. pic.twitter.com/UHyCb5VZ40

Thomas played a great game on Sunday, even if his low field goal percentage and aforementioned eyebrow-raising postgame comments distracted viewers. Of his 7 assists, 5 came in transition, where Thomas successfully reeled in defenders before making the right play with the ball.

Love or hate it, many of today's great scorers possess a knack for getting to the free-throw line. Thomas drew a whopping 11 fouls and knocked down all of his free throws. When he feels contact, the second-year guard gets in the air quickly (like above), and with some body control and a bit of gamesmanship, can make life difficult for refs and defenses.

The "too good for Summer League" label gets thrown around a bit too much for my liking, and I don't know if any one player has shown that kind of dominance this summer. Grimes is certainly the closest to the moniker so far.

Grimes is just so confident as a shot-maker. His touch was back on Sunday, and he was unfazed on deep triples, even through contests. The 6-foot-5 wing also had two strong takes to the basket. His 4 assists included a sweet behind-the-back dump-off that even caught recipient Jericho Sims off-guard. Grimes and Sims later connected on another pick-and-roll finish; they have very apparent chemistry through the first handful of games in Vegas.

Jonathan Kuminga deserves fair praise for his game-high 28 points, but I want to highlight McClung because he floored me with his aggression on both ends. The undrafted guard was locked in as a defender off the ball and picked up 2 steals by reading the ball-handler and positioning himself in passing lanes. On offense, he constantly tried to play fast, and used his handle and shiftiness to change speeds and get to the basket.

McClung played just two NBA games last season and mostly spent time with the South Bay Lakers. He's had a phenomenal Summer League to date though, and has played his way to at least a two-way contract with a franchise, in my opinion.

Peyton Watson put up 19 PTS and 7 REB to lead the @nuggets to a W tonight ⛏️ pic.twitter.com/bOnz7fkFMC

Watson was loud and authoritative in his breakout Summer League game. The No. 30 pick threw down some putback slams and finished off cuts in Denver's win over the Cavaliers.

Watson also notched an unassisted driving layup, and his lone assist was a nice pick-and-roll feed to rookie teammate Ismael Kamagate. Denver has given Watson some decent burn on the ball, offering brief glimpses into his potential as a playmaking, 6-foot-9 forward.

Santi Aldama starred on both sides of the ball tonight in the @memgrizz win.

This is the Santi Aldama experience. After a listless performance on Saturday, the second-year forward put together perhaps the game of the day against the Timberwolves. He switched well on defense, picked off some transition passes and, on one play, skied over from the paint to the weak-side corner for a huge block.

Memphis fed the former Loyola Maryland Greyhound against a smaller Minnesota frontcourt. Aldama feasted in the post, on timely cuts and on some short roll plays. He's definitely best utilized as a cutter as his three-point shot remains a work in progress, but it's a joy to see Aldama active and moving all over the court.

This was a rough crash back to Earth for Simonovic after his impressive showing on Friday. The center was simply not an impactful defender, often slow to help and recover and a non-threat to block shots. His trio of three-point misses were ugly, and his only attempt at the rim was a missed second-chance tip. The Bulls need some help at center behind Nikola Vucevic, but this game is not helping Simonovic make his case for minutes.

King won last year's Summer League Championship Game MVP with Sacramento, but that did not translate to playing time in the regular season. He's still a pure scorer at this stage, so when the shot does not fall as it did not on Sunday, King's offensive impact plummets. He committed 3 turnovers as a result of predetermining some passes and only tallied a single assist. Kings has played for two NBA teams since going undrafted in 2019, so hopefully he turns this around and lands a third opportunity.

Several Grizzlies players were off the mark on Sunday. LaRavia just did not have his touch from long range, and some of the misses were surprisingly well off the mark. He also displayed some instances of hesitancy attacking closeouts. LaRavia's lone bucket was a great vertical cut rewarded with a pass and a layup. Hopefully Memphis finds more ways to get him involved and build some confidence.

Is it mildly concerning that Williams has made just 3 of his 13 shots in Summer League so far? Williams struggled to work in the post on Shareef O'Neal, and couldn't convert one layup on an out-of-bounds play despite receiving a quality chance. The No. 15 pick did only play 17:41 against the Lakers and has come off the bench in both of his contests. Again, it's just Summer League, but I'd like to see Williams assert himself more as a play-finisher going forward.