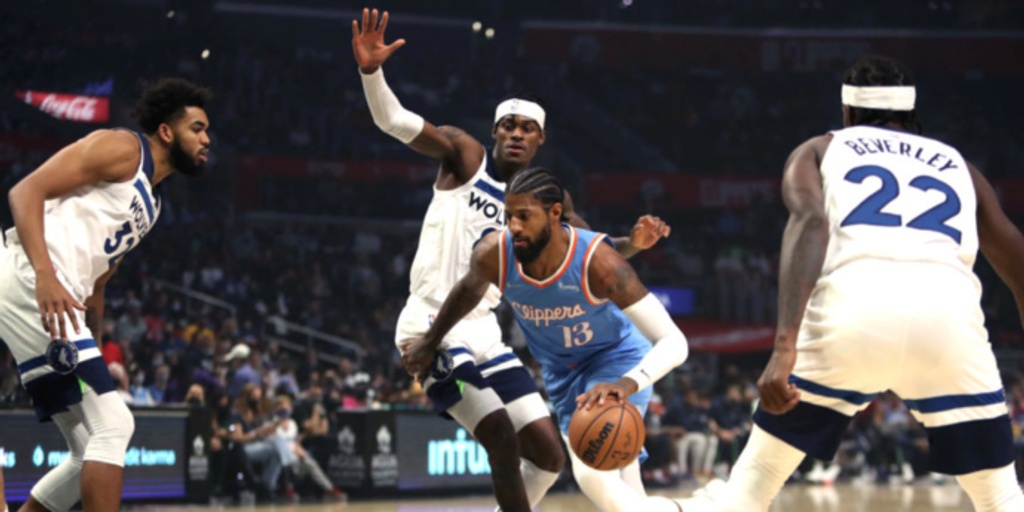 Wolves get tough Play-In foe with George back for Clips

For all the strides the Minnesota Timberwolves made this season on both ends of the floor, proving themselves as a team on the rise with plenty of untapped potential, their entry into the NBA playoffs has still yet to be secured.

“He takes them to a whole other level,” Timberwolves coach Chris Finch said.

The confident team that reached the Western Conference finals last year — and beat the Wolves three times in November when George was healthy — has the seven-time All-Star back in the lineup after a three-month absence with an elbow injury.

The Clippers visit the Wolves on Tuesday night in a play-in game for the No. 7 seed and a first-round date with Memphis. The loser must turn around and beat the San Antonio-New Orleans winner to get the No. 8 seed and a matchup with league-leading Phoenix, or else begin their offseason with the rest of the lottery-bound teams.

“We stop Paul George, we win the game,” said Anthony Edwards, who will likely have the primary responsibility of guarding the 12-year veteran wing.

George had 76 points, 25 rebounds, 18 assists and four steals over those three earlier victories by 11, 20 and 27 points. Minnesota won by 18 in the last matchup in January when George was out.

The Clippers, who finished four games behind the Wolves, have measurably more postseason experience to counteract the home-court advantage.

“I don’t really believe in that,” LA coach Tyronn Lue said. “One game, anyone can get hot or we could have a bad shooting night. We can’t ease into the game. We've got to be ready to go from the jump.”

The Clippers recently welcomed back another integral player, Norman Powell, from a broken foot that sidelined him for 22 games shortly after he was acquired in a trade with Portland.

“We're in a good place,” Lue said. “Got to continue playing the right way.”

The Wolves only have Karl-Anthony Towns left from their 2017-18 team that lost in the first round to Houston, the only appearance in the playoffs since 2004 for the long-woebegone franchise. The fans have begun to come back and make the arena loud again, with Towns, Edwards and the rest of the roster giving them reasons to repeat their visits.

“This is a great sports town,” said Finch, who signed a multi-year contract extension on Monday. “If you play hard and you play the right way and you do the right things, they’ll support you.”

The addition of defensive ace and emotional leader Patrick Beverley this season has given the Wolves a big boost, and he's conveniently the most knowledgeable person in the organization about the ins and outs of the Clippers. Beverley spent the previous four seasons with LA. Two trades — the first one to Memphis — sent him to Minnesota.

“He talks a lot of trash, but he can back it all up,” Towns said. “So shoutout to him, what he’s done, what he’s brought this team.”

The Clippers were able to disrupt Towns and his flow with the offense in their matchups this season, one of the first opponents to find success by sending a smaller forward — in their case, Nicolas Batum — to defend the All-Star center with a physical approach to the post.

“The Batum wrestling match” was how Finch described it, with a wry smile.

On top of missing George and Powell for long stretches this season, the Clippers have been without Kawhi Leonard the entire time. The two-time NBA Finals MVP is still rehabilitating the torn right ACL he suffered in the second round of last year's playoffs.

Lue has given mostly vague answers to questions about Leonard’s status, but the Clippers have not ruled him out for a return at any point during the playoffs.

Clippers guard Amir Coffey took advantage of increased playing time amid the injuries, and he'll have a chance to show off his development in his home state. The former Gophers star was the Minnesota AP Player of the Year for Hopkins High School in 2016.

“Going back home, the most important game of the season, having my people in the crowd, hopefully we can come out with a win,” said Coffey, who started 30 games this season and shot 54.2% from the field.

He played at Target Center in the Class 4A state semifinals his sophomore year, a four-overtime game he won by swishing a tiebreaking shot from well behind half court to beat the buzzer.

"Probably one of the craziest shots I made,” Coffey said.