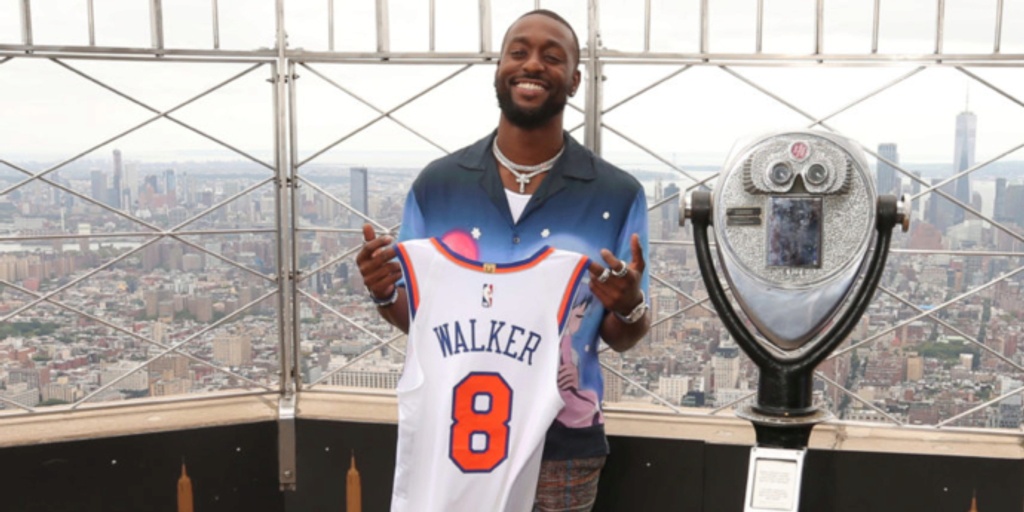 Walker's welcome: Kemba comes home to play for the Knicks

The “Welcome to New York” signs decorating the outside of Madison Square Garden and hanging behind him were nice, though unnecessary.

He's a New York native who was already playing at Madison Square Garden in high school and made a memorable buzzer-beater during a historic Big East tournament run while playing for Connecticut.

Now he gets to see what he can do while playing there for the New York Knicks.

The Knicks held a news conference Tuesday to announce the additions of Walker and Evan Fournier, his teammate last season with the Boston Celtics who was acquired in a sign-and-trade deal.

Fournier, like many around the NBA, called Madison Square Garden his favorite arena. But few players — Knicks or otherwise — can match Walker's history in the building.

The highlight video montage that played before the start of the news conference included Walker's step-back jumper to beat Pittsburgh in the quarterfinals of the 2011 Big East tourney, when he led the Huskies to a stunning stretch of five wins in five days.

“That was just a special, special run,” Walker said.

They followed it by winning the NCAA championship, with Walker the Most Outstanding Player. He went on to play eight seasons with the Charlotte Hornets and thought there was a chance he would sign with the Knicks in 2019 as a free agent before instead going to Boston.

Now, a decade after he lit up the arena, the arena was lit up with his picture.

“I think everything is perfect. Everything,” Walker said. “Perfect timing.”

It happened after the Celtics traded him to Oklahoma City in June. Walker agreed to a buyout so he could sign elsewhere, though said the Knicks were his only choice.

At 31, the 6-foot-1 Walker may no longer be the same player who has averaged 19.9 points and been selected to four All-Star Games. He struggled with knee pain in each of the past two postseasons, though said Tuesday he feels great now.

No matter what, his signing was popular in New York, where the Knicks have long searched for a point guard and may have finally found one right in town. Walker was besieged by messages from friends, old coaches and beyond following the news that he'd be a Knick.

“I planned on telling everybody I only get four tickets,” Walker joked to a small crowd at MSG that included his mother and sister.

Fournier agreed to his four-year deal worth about $78 million while in Tokyo, where he was France's leading scorer in the Olympics. The French beat the U.S. in their opening game and lost to them in the final, matching their best finish with a silver medal.

The swingman averaged 17.1 points last season for Orlando and Boston and should provide scoring punch for a Knicks team that defended well under Tom Thibodeau but was searching for more offense in the offseason.

Fournier spoke to Thibodeau during the tournament, with the coach not only wooing the player but also talking trash to him, telling Fournier that after he won a silver medal that he needed to come to New York and talk.

“Unfortunately that’s what happened,” said Fournier, though he knew by then that the Knicks were his destination.

“It was pretty clear to me that New York was going to be the team for me,” he said.

The Knicks announced Tuesday they had acquired Fournier along with a pair of second-round draft picks for cash considerations.

They hoped at one time that Frank Ntilikina, Fournier’s teammate with the French national team, could be their point guard solution. But the last lottery pick of Phil Jackson just before he was ousted as Knicks president never developed and the search continued.

It led them to Walker, who was on vacation when he learned he was dealt to Oklahoma City.

Vacation is over. Now he is home.

“I can’t really put into words how amazing this feeling is, being at home,” Walker said.