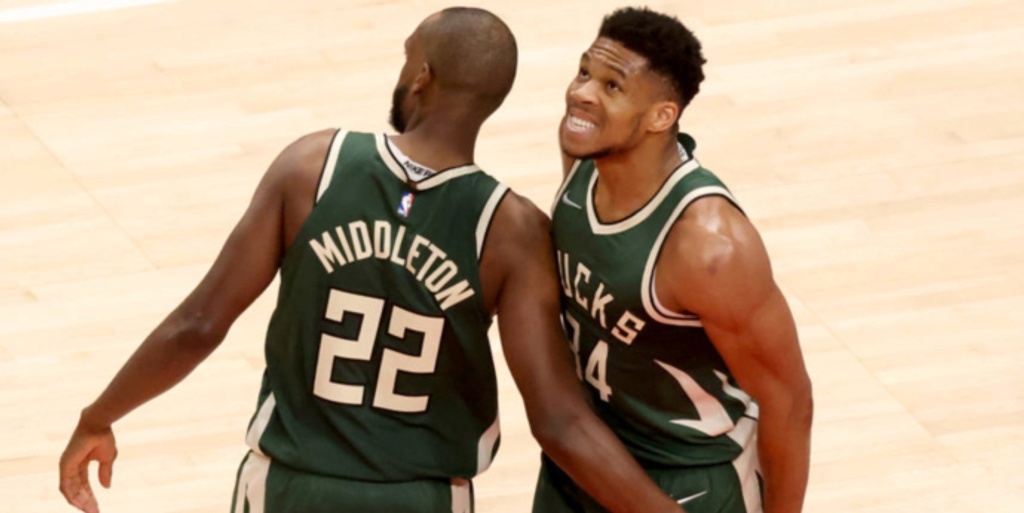 ATLANTA (AP) — Giannis Antetokounmpo is a two-time MVP, one of the best players on the planet.

Even so, he'll gladly cede the closer's role to Khris Middleton in the Eastern Conference Finals.

With Middleton taking command in the final minutes, the Milwaukee Bucks are now up 2-1 on the Atlanta Hawks heading to Game 4 of the series Tuesday night.

“We were like, ‘Get the hell out of the way, give him the ball, take us home, Khris,’ and that’s what he did,” Antetokounmpo said. “I trust this guy to death. If he wants the ball, he gets it. Simple as that. He’s knocking down shots."

Middleton scored 20 of his playoff-career-high-tying 38 points in the fourth quarter of Game 3, rallying the Bucks to a 113-102 victory that restored the home-court edge they lost to the Hawks in the series opener at Milwaukee.

Antetokounmpo wasn't the least bit hesitant about stepping aside for Middleton in the biggest minutes of the series so far.

“Doesn’t matter who is the first guy. Does not matter,” Antetokounmpo said. “I want to be a winner. I have the whole game to be the guy. I don’t care about being the guy in the fourth quarter.”

While the Bucks appear to have several players who can carry them to the NBA Finals — don't forget Jrue Holiday — the Hawks rely on one player above all others.

Trae Young twisted his right ankle in a freak accident Sunday night, stepping on a referee's foot along the sideline in the final minute of the third quarter. He underwent an MRI on Monday, which showed a bone bruise. He was listed as questionable for Game 4.

It's hard to envision the upstart Hawks pulling off another playoff upset without a player who's been one of the breakout stars of the postseason.

Young is averaging 29.8 points in the playoffs, including 35 in Game 3 even though he made only one basket after being injured.

“He's the head of our snake,” teammate John Collins said. “That's the last thing anyone who's a Hawks' supporter wants see is that dude coming down with any knick-knack or whatever it is... You hate to see it. I'm just hoping and praying he's gonna be OK.”

Young was able to return to the court with just under nine minutes remaining and the Hawks nursing a five-point lead. But he was limping noticeably and grimacing in pain every time he dribbled up the court.

Lacking his trademark explosiveness, which creates so many opportunities for the Hawks' offense, Young hit only one basket the rest of the game. Middleton and the Bucks outscored Atlanta 25-9 to win going away.

“It was really my blow-by speed,” Young said. “That’s a big part of my game, my ability to blow by anybody.”

If Young can't go in Game 4, or can only play limited minutes without his usual effectiveness, the Hawks will have to rely on a team effort to compensate.

That means Lou Williams playing a bigger role, Collins staying out of foul trouble, and Bogdan Bogdanovic being much more effective than he has been so far in the playoffs.

Bogdanovic, who was Atlanta's biggest free-agent signing during the last offseason, has been the most glaring disappointment of the surprising postseason run by the conference's No. 5 seed.

Bothered by a sore knee, Bogdanovic is averaging just 12.3 points in the playoffs and has gone six-straight games without reaching double figures. He was awful in Game 3, making just 3-of-16 shots to finish with eight points.

“His shot has not fallen for him, but he’s a guy who I believe that next shot is going down,” coach Nate McMillan said. “He had some wide-open looks that I’m willing to trust that he’s going to knock those shots down. It just isn’t falling for him. It hasn’t fallen for him this whole series."

While the Hawks might need someone other than Young to play a leading role on offense, they're faced with an equally perplexing predicament at the defensive end: Stopping Milwaukee's Big Three.

Antetokounmpo is averaging 30.7 points per game in this series, Middleton 22.7 and Holiday 20.3.

The Hawks could sure use De'Andre Hunter, one of their best defensive players, but he's out for the rest of the season after undergoing knee surgery.

Also, the Hawks made things even easier for the Bucks by settling for too many contested shots early in the shot clock, giving Milwaukee a chance to turn misses into easy transition baskets at the opposite end.

McMillan acknowledged the difficulty in shutting down — or at least creating more issues — for Milwaukee's big scorers.

“It’s really a three-headed monster over there with Antetokounmpo as well as Khris and Jrue,” the Hawks coach said. “All of those guys are isolation players. They do a good job of spacing the floor. If you are committing to the ball, then they are more than happy to shoot the three-ball.”

Especially Middleton, who went 6-of-12 from beyond the arc in Game 3.

“When a guy gets hot like that, you’d like to basically run a guy at him,” McMillan said. “Before we could even get a guy on him, he had released it. He was really scoring from everywhere.”

The two-time MVP was glad to keep feeding Middleton the ball.

“For me, it was greatness,” Antetokounmpo said. "Simple as that.”