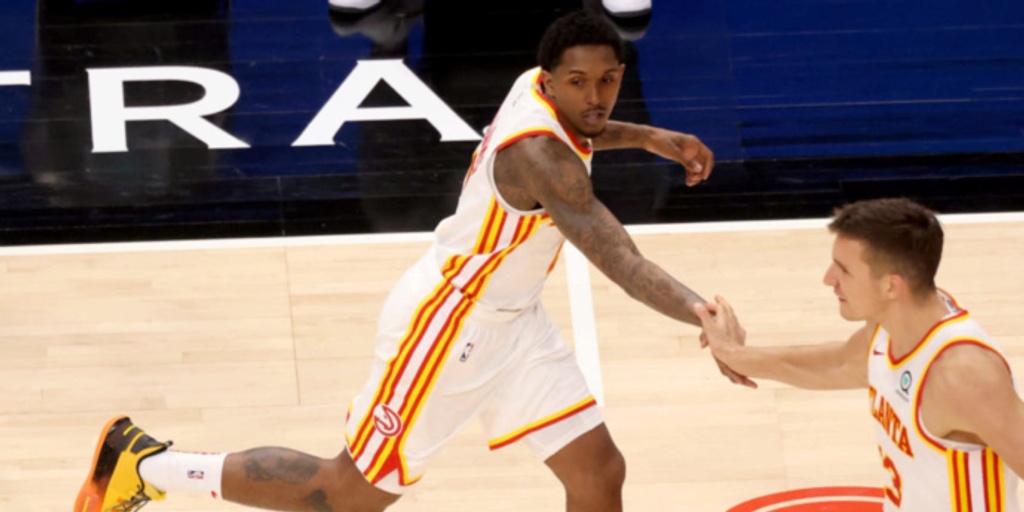 ATLANTA (AP) — Lou Williams was on the training table when his coach walked up to deliver some rather startling news.

Atlanta Hawks star Trae Young would not be able to play Game 4 of the Eastern Conference Finals because of an injury.

Williams would be getting the first playoff start of his long career.

“It's not like a ‘Remember The Titans’ thing happens in the locker room, I can promise you that," Williams said with a wry smile. ”That was the extent of our conversation, and then we had to get ready for the game."

Boy, was he ready.

Williams stepped into Young's enormous shoes and guided the Hawks to a 110-88 rout of the Milwaukee Bucks, evening the Eastern Conference Final at two wins apiece Tuesday night.

Williams led the way with 21 points on 7-of-9 shooting, dished out eight assists and had just one turnover in 35 minutes of playing time — his most extensive outing since the 34-year-old guard was acquired by the Hawks at the trade deadline.

Long one of the NBA's best players off the bench (he's a three-time Sixth Man of the Year), Williams started for the first time in the 87th postseason game of his career.

“I haven't been able to enjoy the moment,” he said. “I'm stuck in it. I just want to ride this thing until the wheels fall off.”

Williams never could've imagined being in this position after the Los Angeles Clippers dealt him to Atlanta for Rajon Rondo.

Williams was stunned by the trade and briefly considered retirement, even though he grew up in suburban Atlanta and had played for the Hawks from 2012-14. He was comfortable with the Clippers and considered himself a big part of their championship drive.

Now, he's two wins away from the NBA Finals with the Hawks.

“This wasn't a team I was paying attention to,” Williams conceded. “With the Clippers, we were on the hunt for a championship run. I was focused solely on that. But once I was able to get around these guys, get around the organization, get a good feel for what's going on around here, I felt like there could be some great potential here.”

Young, who has been a breakout star of the Hawks' improbable postseason run, was injured in a freak accident during Game 3. While turning to run up court, he stepped on a referee's foot along the sideline and twisted his right ankle.

After being diagnosed with a bone bruise, Young had hoped to return for Game 4. The Hawks held off until about an hour before game time before ruling out their best player.

Williams made sure they didn't miss him a bit.

“Lou is always the same. He's always even-keeled, steady Lou,” teammate Kevin Huerter said. “He's kind of a legend. He just has this way about him... He comes in here and drops 21 like he's been playing 40 minutes the whole playoffs."

Indeed, Williams brought a sense of calm to a young team that easily could've panicked when everyone learned that Young couldn't play.

“He gives us another level of confidence in the locker room,” said Bogdan Bogdanovic, who broke out of his series-long long slump with 20 points. “To play the game with him is so easy. Communicating with him is so easy. He's been in the league so long. He's seen everything. He knows how to make the game easier for everyone.”

The Hawks aren't sure if Young will be able to play Thursday night, when the series returns to Milwaukee for Game 5. Coach Nate McMillan said it will likely be a game-time decision.

If Williams gets the call for his second playoff start, he'll be ready.

Hey, he's already gone much farther than he ever could have expected.

“Did I look ahead and say we were going to be a championship contender from day one?” Williams asked rhetorically. “Probably not. But we're two wins away (from the Finals) like everybody else. You've got to feel good about it.”