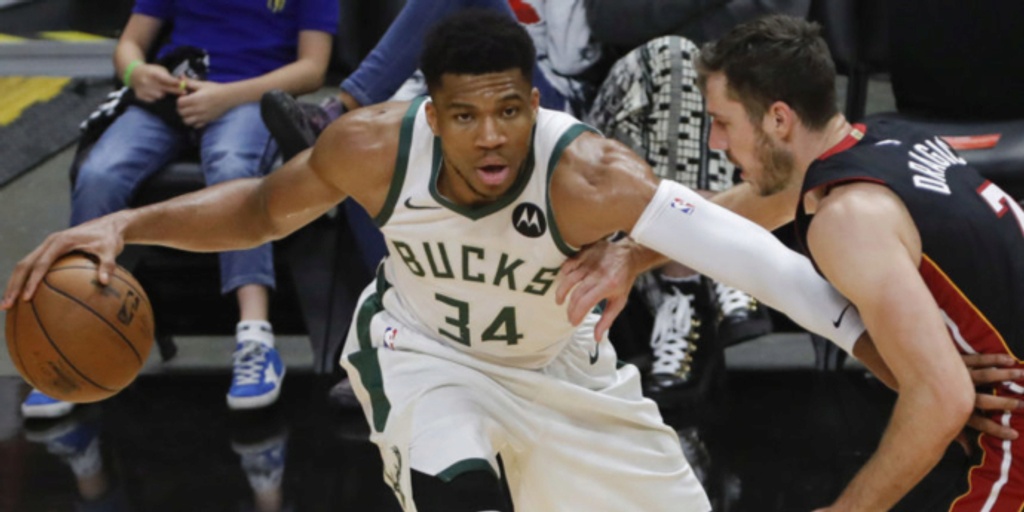 Turns out, there was a reason the Milwaukee Bucks weren't worried about a playoff rematch with the Miami Heat in Round 1 this year.

The last four games proved why.

Brook Lopez scored 25 points, Giannis Antetokounmpo had a triple-double — 20 points, 12 rebounds and 15 assists — and the Bucks became the first team to advance in this year’s playoffs, beating the Heat 120-103 on Saturday and finishing off a four-game first-round sweep over last season’s Eastern Conference champions.

Bryn Forbes scored 22 points, Khris Middleton had 20, Bobby Portis 13 and Jrue Holiday 11 for Milwaukee, which outscored Miami by 24 in the second half.

Bam Adebayo scored 20 points and grabbed 14 rebounds for Miami, which got 18 points from Kendrick Nunn, 14 from Tyler Herro, 13 from Goran Dragic and a triple-double — 12 points, 10 rebounds, 10 assists — from Jimmy Butler.

The Heat became the second team in this playoff format to go from sweeping in the first round one year to being swept in the first round the next. The only other team to endure that: the then-New Jersey Nets, who swept New York in 2004 and lost 4-0 to Miami in 2005.

Once Milwaukee grabbed the first three games, history said the result was inevitable. NBA teams with 3-0 series leads are now 141-0 all-time in those matchups, with these Bucks becoming the 88th of those teams to finish off matters with a sweep.

Their reward: a week off, at least.

The third-seeded Bucks won’t play again until at least next Saturday. Their East semifinals series against either second-seeded Brooklyn or seventh-seeded Boston will start on June 5 if the Nets advance in five games; in any other scenario, the Bucks will next play on June 7.

After a pair of Milwaukee romps by a combined 63 points in Games 2 and 3, this one immediately took on a different feel.

The Heat — who led 9-2 shortly after the start of Game 1 and hadn’t enjoyed even that much of a margin in the last 136 minutes and 8 seconds of basketball leading into the start of Game 4 — got the early jump. A pair of free throws by Duncan Robinson with 3:48 left in the opening quarter put Miami up 20-12, its biggest lead of the series, and the Heat margin would eventually grow to as much as 12 in the first half.

Yet there were signs that the Bucks had to like: Antetokounmpo was 1 for 7 with three fouls in the first half, Milwaukee had only two points off the first seven Heat turnovers, and despite all that, Miami’s lead was merely 64-57 at the break.

And, sure enough, the third quarter was all Milwaukee.

The Heat couldn’t make anything; they shot 8 for 24 in the quarter. Bobby Portis’ 3-pointer late in the third put Milwaukee up by 12, and the lead was 91-85 going into the fourth.

Bucks: Pat Connaughton started for Donte DiVincenzo, who will miss the rest of the season with a torn tendon in his left ankle. ... Milwaukee went 6-1 against the Heat this season. In the previous four seasons combined, the Bucks were 6-13 vs. Miami. ... Milwaukee is 12-1 in its last 13 first-round games. ... The Bucks are now assured of receiving at least $995,797 from the league’s $20.8 million postseason pool.

Heat: Miami finished the season 40-36 overall, the 15th-best record in the franchise’s 33 seasons. ... It was the first time Andre Iguodala, a veteran of 33 playoff series, endured a sweep. ... This was the third consecutive season that the team coming off an NBA Finals loss didn’t win a postseason game. Cleveland missed the 2019 playoffs, Golden State missed the 2020 playoffs and this Heat team got swept. ... Miami will receive $592,385 from the league’s postseason pool.

It was the fifth sweep of a best-of-seven series in Bucks history, joining the 2019 first round (vs. Detroit), 1983 East semifinals (vs. Boston), 1974 Western Conference finals (vs. Chicago) and 1971 NBA Finals (vs. Washington). Miami lost a series 4-0 for only the second time, also falling in the 2007 first round vs. Chicago.

This was the first series since 2014 in which Butler didn’t have at least one 20-point game. He shot 19 for 64 in this matchup, by far the worst shooting series of his career.