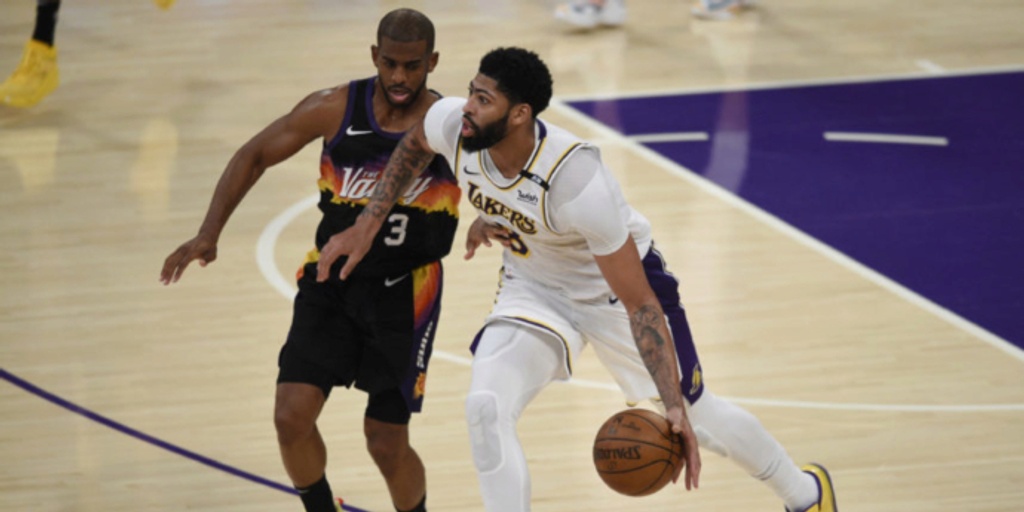 PHOENIX (AP) — The Phoenix Suns plowed through the regular season in impressive fashion, breaking an 11-year playoff drought by finishing with the second-most wins in the entire league.

In arguably the most intriguing opening-round matchup, the No. 7 seed Lakers enter the series as a slight betting favorite over the No. 2 seed Suns, according to FanDuel. The main reason is obvious: Los Angeles has a healthy LeBron James and Anthony Davis after both superstars missed big chunks of the regular season with injuries.

The Suns aren't complaining. After all, they figured they'd be playing the Lakers at some point anyway if they wanted to make it to the NBA Finals.

“Our guys aren't bitter, we're looking forward to competing against the Lakers,” Suns coach Monty Williams said. "We're not upset or feel like anybody has done something to our Cheerios. We have to go play the Lakers. Everything you want is on the other side of hard.

“Right now, the Lakers are our hard."

It's an especially sweet moment for Booker. The two-time All-Star slogged through five losing seasons before finally getting to the playoffs. He said he's “100 percent” grateful to get the chance to face the Lakers in the postseason and isn't concerned about what the oddsmakers are saying about the Suns' chances.

“We have a good group in this locker room, from top to bottom,” Booker said. “We're focused on winning basketball games. That's it.”

James missed most of the past two months while dealing with a sprained ankle but returned for the season's final few games. The 36-year-old looked ready for a playoff push in the Lakers' 103-100 win over Golden State in the play-in tournament. He finished with 22 points, 11 rebounds, 10 assists and hit a crucial 3-pointer in the final minute that proved to be the game-winner.

But the four-time NBA champion said underestimating the Suns would be a mistake.

“They are the number two team in the league for a reason,” James said. “They surround CP and Book with a supporting cast that has played at a big level. We have to understand that and match that.”

For the first time in their storied careers, Paul and James will face off head-to-head in the playoffs.

James said matchups against Paul are as much of a mental grind as a physical one.

“It is going to be comparable to playing against Rondo and Draymond in the series — high IQ guys and great competitors,” James said. “I knew I had to be on my A-game physically and with my mind. I know the competitor and IQ of a basketball player that (Paul) is.”

Paul was phenomenal in his 16th season, averaging 16.4 points and 8.9 assists for the Suns, giving them the production and savvy they needed to move into the league's elite.

But the number CP3 takes the most pride in might be 70. That's the number of regular-season games he played out of a possible 72. It's one reason the week of rest leading up to Sunday's Game 1 has been appreciated.

“One of the things I'm most proud of is being available," Paul said. “I think that's a talent in itself, is just being available for the team. Given the rigorous schedule that we had, I think I did a really good job of taking care of my body.”

Health was one reason the Suns had so much success during the regular season. The team's core of Mikal Bridges (72 games), Paul (70), Ayton (69), Booker (67) and Crowder (60) was able to spend a lot of time on the floor together, which gave them ample time to gel.

Several of the Suns' best players, including Booker, Ayton and Bridges, will be playing in the NBA postseason for the first time.

On the other side, James will be playing in his 261st career playoff game on Sunday. Actually, it's the 262nd if you count Wednesday's play-in game against the Warriors. Several of the other Lakers were on last year's team that won the title.

“When you have a group that won a championship, that benefits you,” Vogel said. “If there are teams that don’t have experience, that can go either way. When I was in Indiana with a group without experience, we had guys who played out of their minds.”