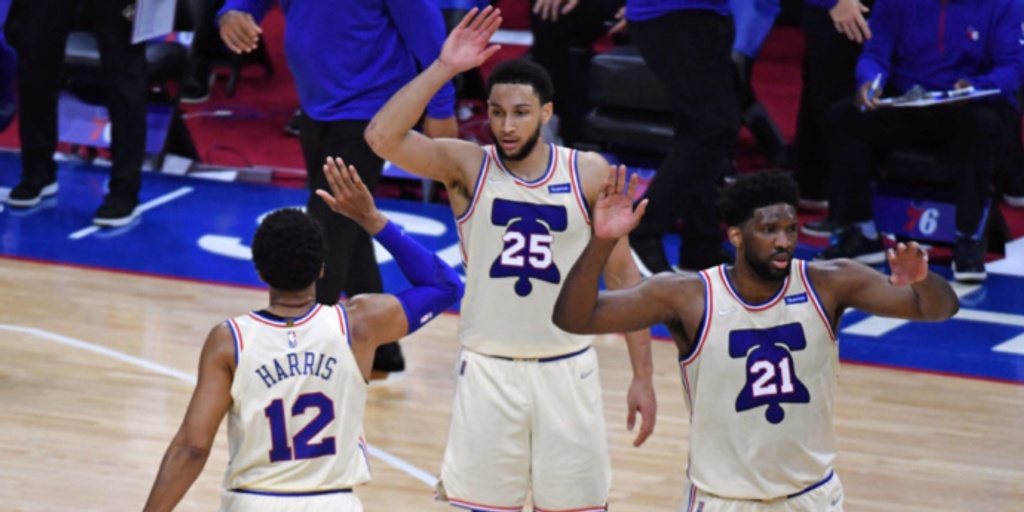 76ers trusted the process and now they're the East's top seed

PHILADELPHIA (AP) — Daryl Morey posed for a photo in a bookstore wearing a T-shirt of the Liberty Bell emblazoned with a “Come To Philly For The Crack” slogan and held a copy of “Basketball for Dummies.”

Oh, the Sixers were called much worse than a group of dolts when the franchise embarked on the strip-for-parts rebuilding seasons known as the Process. The Sixers were Team Tank. Larry Brown, the coach who led the Sixers to the 2001 NBA finals, said the early seasons “made me sick to my stomach.” Philly lost some games. Well, lots of them. It had two, 26-plus game losing streaks that made even the most loyal fan feel nauseated.

Through it all, Philly stood by its ethos: Trust the Process.

The motto spawned books, merchandise, podcasts and endless debate. Lottery busts and a Twitter scandal. Laughter, derision -- and in some corners around the NBA, admiration for the open and bold manner of building a winner.

“Listen, I was there when we were ‘Trusting the Process,’” Wizards guard and former 10-win Sixers member Ish Smith said. “And as you know, they’ve come a long way.”

Look at the Sixers now.

Fan or critic, this season represented a litmus test for the Process and the results were sensational: Philadelphia (49-23) has an MVP candidate in Joel Embiid, a defensive player of the year candidate in Ben Simmons and the top seed and home court throughout the East playoffs.

The Sixers (with 8-1 odds) really can win the NBA championship for the first time since 1983.

The mission starts at home with Game 1 Sunday and Game 2 Wednesday against the Washington Wizards (34-38).

“It’s funny, you can go either way on if that was a success or not,” coach Doc Rivers said. “I think if you came to every GM and said, ‘I’ll give you a 12-year plan,’ I think they’ll take it. ... I don’t know how long it takes each franchise to win the title.”

Rivers already had future Hall of Famer Paul Pierce in place when the Boston Celtics traded for superstars Kevin Garnett and Ray Allen before the 2007-08 season and they immediately won the NBA title.

The Sixers’ championship pursuit has simmered in a slow cooker since 2013, as Embiid missed his first two seasons and Simmons sat out one with injuries. The Sixers reached the Eastern Conference semifinal with consecutive 50-win seasons in 2018 and 2019 and bottomed out last season when they were swept in the first round by Boston. That sparked roster changes that brought in starters Danny Green and Seth Curry and backup big man Dwight Howard and, perhaps of most importance, the one who found the formula to make it all work in Rivers.

Rivers is nine wins shy of becoming the fifth coach in NBA history with 100 postseason victories.

“We’ve done nothing,” Rivers said. “We’ve had a great regular season. Everyone starts 0-0 right now. This is a huge accomplishment. But this is the first one.”

NOBODY BEATS THE WIZ?

The Wizards face long odds -- and an ugly history as they try and knock off the Sixers. The Wizards are trying to become the first team with a losing record to win a playoff series since the 1987 Seattle SuperSonics. That’s 30-straight postseason series losses for teams with losing records. Russell Westbrook and Bradley Beal, who torched the Sixers for 60 points this season, led a late-season surge that took the Wizards from 15 games below .500 into the postseason. The Wizards are the sixth team under the current playoff format (since 1984) to make the playoffs after being 15-plus games below .500. Teams that made it out of the first round? Zero.

Wizards coach Scott Brooks, a former Sixer, said an upset could be afoot.

“They put their socks on one sock at a time, like us. Unless they do something different, putting both on at the same time. But I don’t think so; that’s some tricky stuff there,” Brooks said.

Washington advanced by routing the Indiana Pacers 145-117 on Thursday night — “It’s probably the most beautiful thing I’ve seen us do all year,” Beal called it -- to emerge from the play-in round as the East’s No. 8 seed, returning to the playoffs after a two-year absence.

The Wizards were a disaster early in the season, dealing with injuries and a COVID-19 outbreak, soft defense and little cohesion, and starting 0-5. then sitting at 17-32 in early April.

The Sixers swept the season series 3-0.

The Wizards will use a center-by-committee to go up against Embiid: Alex Len usually starts and offers some measure of rim protection; Daniel Gafford usually is the first big man off the bench and can run the floor on offense — the guards will look to lob the ball to him — and is a shot blocker on defense; Robin Lopez, 33, knows every paint move in the book and has a hook shot that is often successful. Against the Pacers, that trio combined for 28 points and 23 rebounds. Gafford, acquired in a trade deadline deal with Chicago, contributed 15 points, 13 rebounds and five blocks. “The three centers — look what they did. They all chipped in. They all contributed,” Brooks said. “They don’t get a lot of credit. They deserve a lot of credit.” One issue Gafford needs to be careful with is foul trouble, and he acknowledged as much, saying with a chuckle: “I’m sometimes a foul magnet. I want to put an end to that.”

It’s only a two-day break from Thursday’s win to Sunday’s series opener for the Wizards, but that might seem like forever to them. Washington hasn’t had this much time without competing since the same lag between its contests March 18 and 21 — more than two months and 30 games ago. By Sunday, in contrast, the 76ers will have gone a week without playing and they had two days off between regular-season games as recently as May 9-10. “It is kind of interesting that two days feels like an eternity at this point,” Washington center Robin Lopez said. “I’m sure it’ll make somewhat of a difference. The human body’s got to be able to recuperate a little more in two days than in one day, I would assume.” That could be useful for someone like Beal, who missed three games late in the season with a strained left hamstring and hasn’t been back to 100% yet.