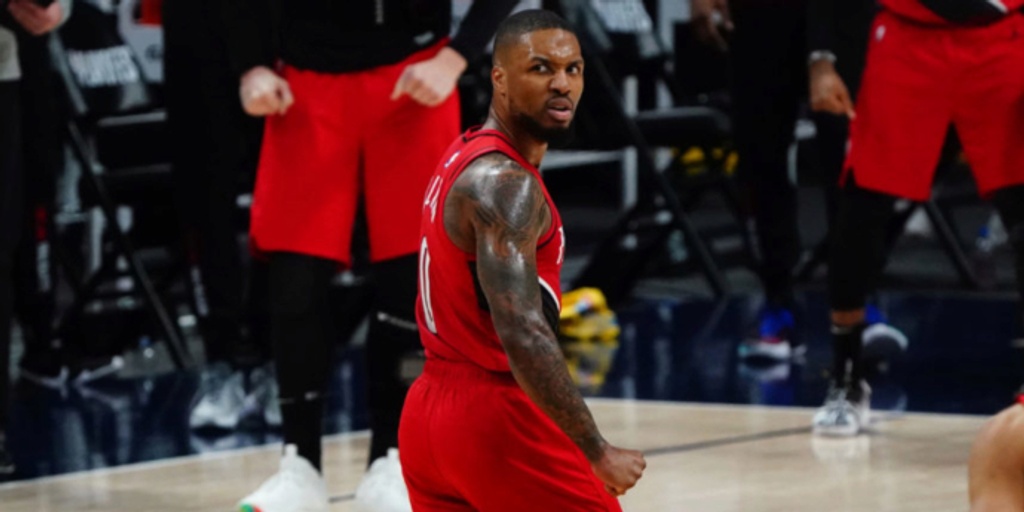 The Blazers hit 19 of 40 shots from beyond the arc, and Lillard, sporting silver sneakers that were a fitting choice for his sterling performance, had five of them.

Subs Carmelo Anthony and Anfernee Simons added four each as the Blazers outscored Denver by 24 points from beyond the arc.

CJ McCollum added 21 points and Anthony scored 18 in his first playoff game against the team that drafted him 18 years ago.

Game 2 in the series is Monday night.

Porter had a trio of buckets in an 8-0 spurt that pulled Denver within 102-98, but the Blazers soon rattled off an 11-0 run to pull away.

Anthony provided an early spark for Portland with 12 points in the first quarter. It was Lillard who took over after halftime, scoring 15 points in the third quarter when he sparked a 32-13 run by the Blazers that turned a nine-point deficit into a 96-86 lead.

Trail Blazers: The teams hadn’t played in six days, since Portland’s 132-116 home win over Denver on May 16 allowed the Blazers to avoid the play-ins. ... Anthony made four of his first five 3-point attempts.

Nuggets: The crowd of 7,750 was the largest of the season. Previously, crowds at Ball Arena were capped at 4,050 during COVID-19 restrictions. ... Gordon blocked Lillard’s 6-foot alley-oop and came down with the ball. Moments later, Porter blocked CJ McCollum’s layup and while McCollum was on the floor, Austin Rivers swished a 3 at the other end.

Jamal Murray returned from L.A., where he’s been rehabbing from his ACL surgery, to cheer on his Nuggets teammates.

“Jamal’s a leader of this team whether he is playing or not,” Malone said. “He can’t score a point for us, but he can provide a lot of other things.”

After shooting baskets before the game, Murray took the mic and addressed the crowd before tip-off.

“Man, I wish I was hooping,” he said as he fired up the crowd at the Nuggets’ first home playoff game since May 12, 2019, when they lost Game 7 of their second-round series to Portland.

Although the Nuggets lost that classic seven-game series two years ago that included a historic 140-137 four-overtime loss to Portland in Game 3, there’s no payback vibe in Denver.

“It can’t be a rallying cry when a bunch of your guys weren’t here for it,” Nuggets coach Michael Malone said. “Remember the Alamo! 'The Alamo? I wasn’t here for that.'”