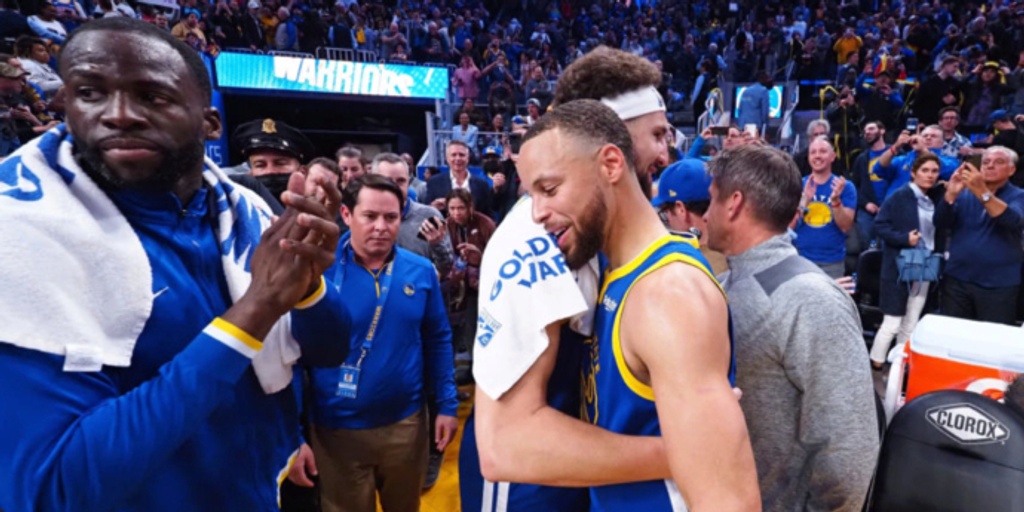 Klay Thompson drained the 3-pointers. Draymond Green anchored the defense and even chipped in on the offensive end for a change. Stephen Curry capped off an MVP performance.

The trio that led Golden State to so much success in recent years is whole again and and has the Warriors in position for another title after advancing to the NBA Finals with a 120-110 victory over the Dallas Mavericks on Thursday night.

“Like I’ve said over and over again, I’m going to keep saying it: No one has proven that they can move us off that spot,” Green said. “That’s the mindset we come into this thing with. We understand what it takes to win a championship.”

The triumvirate of Curry, Thompson and Green is in rarified air in NBA lore as the core of a team that has made it to six NBA Finals in an eight-year span. It's an accomplishment only the greatest groups have reached with Bill Russell's Celtics of the 1950s and ‘60s, Magic Johnson's Lakers in the 1980s and Michael Jordan's Bulls of the 1990s doing it.

“We’re happy to be here, but it would help our legacy a lot if we completed the mission and won the whole thing,” Thompson said. “We can be happy tonight, and we will be, I’ll celebrate tonight. But tomorrow when this Game 6 comes on, I’m turning the page and I’m scouting because we want to finish this thing off the right way.”

(Editor's Note: The Boston Celtics will represent the Eastern Conference after Sunday's Game 7 win in Miami.)

The last time the Warriors made it to the Finals they fell short, starting a two-year spiral filled with losing and injuries. Thompson tore his left ACL during a season-ending Game 6 loss in the 2019 NBA Finals.

Kevin Durant tore his Achilles' tendon earlier that series and then left for Brooklyn that summer, leading to the Warriors finishing an NBA-worst 15-50 in the pandemic shortened 2019-20 season.

Thompson then tore his right Achilles' tendon just before the start of the next season and the Warriors were unable to make it back to the playoffs, getting knocked out by Memphis in the play-in game.

But Thompson returned in January and the combination of the aging trio of stars with an infusion of youth from players like Andrew Wiggins, Jordan Poole and others has Golden State back at the top of the league again.

“We never lost the faith, but you understand how hard of a process it was going to be to climb the mountain again,” Curry said. “I think internally we are all extremely proud of what it took to get back here. Yeah, it’s definitely sweet based on what we went through.”

Thompson led the way in the clinching Game 5 win of the Western Conference finals over Dallas, making eight 3-pointers for a record-setting fifth time in his playoff career and scoring 32 points.

It's a level of play that reminds coach Steve Kerr of the Bulls teams he played on with Jordan and Scottie Pippen that won so many titles in the 1990s.

“The common denominator is just talented players who are fierce competitors,” Kerr said. “Whether you talk about Michael and Scottie, Steph, Draymond, Klay, it takes a special kind of athlete to have both dynamics. The skill and the athleticism and all that, but to also be just incredibly competitive and to want to win so badly. It’s the only way you can have a run like that because you get exhausted, you get tired, you get frustrated. If you don’t have that type of competitive desire and that type of skill combined, it’s just not going to happen six times out of eight years.”