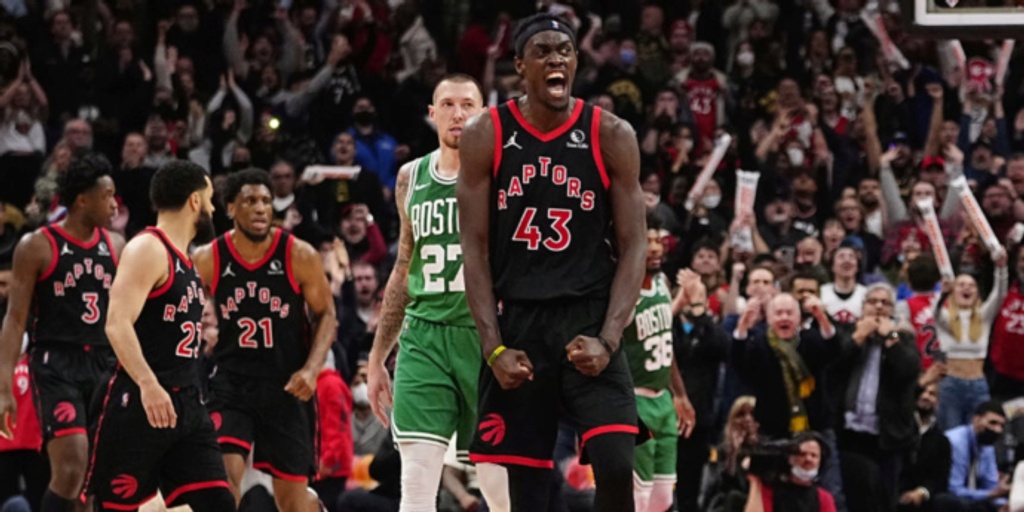 Pascal Siakam had a season-high 40 points and 13 rebounds before fouling out, and the Toronto Raptors beat the short-handed Boston Celtics 115-112 in overtime on Monday night.

Fred VanVleet and OG Anunoby scored 14 points apiece, Thad Young and Gary Trent Jr. each had 12, and Scottie Barnes scored 10 before fouling out as Toronto snapped a four-game home losing streak against the Celtics.

Smart had 28 points and 10 rebounds, Williams scored 17, and Derrick White added 15 for Boston.

Seven Celtics players scored 10 points or more, including Daniel Theis, who had 13 points and 10 rebounds.

Toronto stayed one game ahead of Cleveland for sixth place in the Eastern Conference, while Boston fell one game behind Miami for first in the East. The Celtics host the Heat on Wednesday night.

Sixth place is the last guaranteed postseason spot, with teams finishing in the Nos. 7-10 spots headed for the play-in tournament.

Brown and Tatum both sat with sore right knees. Both played in a win over Minnesota on Sunday and are expected to return for Wednesday’s pivotal showdown with the Heat.

Before the game, the Celtics said Williams will need surgery to repair torn cartilage in his left knee, likely keeping him out for the rest of the regular season and well into the playoffs.

Williams didn’t return after limping off at the end of the third quarter Sunday. Udoka said Williams and the Celtics are considering various surgical options and will make a decision later this week.

“There are some (options) that keep you out longer than others,” Udoka said. “We’re hoping for the best as far as that.”

Boston led 38-30 after one. After scoring 10 points in the first, Siakam added 15 more in the second, and VanVleet’s three-point play with 3.3 seconds to go in the half gave Toronto a 59-58 lead at the break.

The score was tied 80-all through three quarters.

The members of Canada’s men’s national soccer team received a standing ovation when they took the court during a timeout in the second quarter. Canada beat Jamaica 4-0 Sunday to reach the World Cup for the first time since 1986.

Celtics: Made nine turnovers in the second, leading to 14 points. … Shot 6 for 12 from 3-point range in the first quarter, but went 6 for 28 from distance the rest of the way.

Raptors: C Khem Birch (right knee) was not available. … Trent started for Toronto after missing the previous three games because of a sore left big toe. He shot 4 for 12 in 37 minutes.