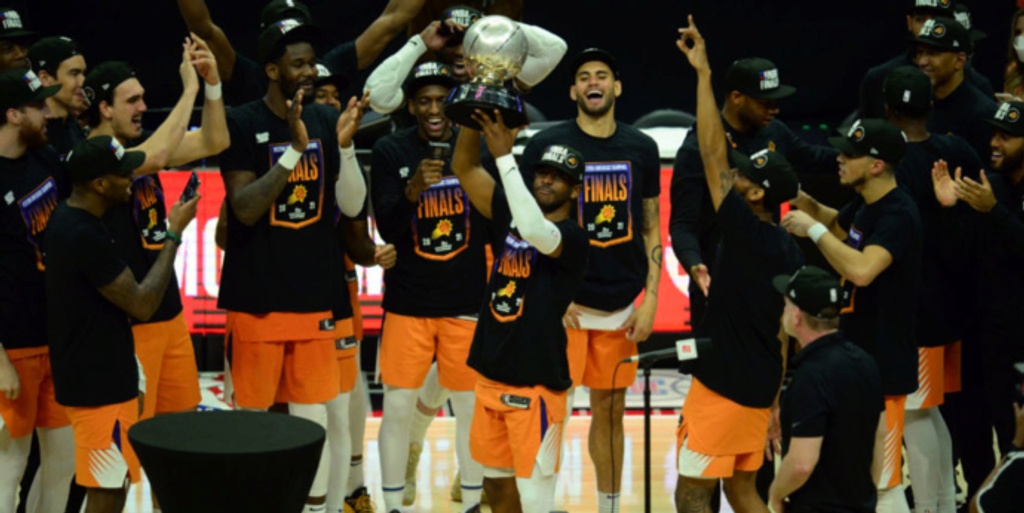 The seeds for this were planted nearly a year ago.

The Phoenix Suns were in the middle of their eight-game unbeaten run inside the bubble at Walt Disney World last summer when someone asked coach Monty Williams if it was fun to be the feel-good story of the event.

His answer was telling.

“Fun? I don’t have time to have fun right now,” Williams said. “It’s always good to win, but I’m working right now. And I want guys to understand, it’s fun when you win — but then you’ve got to turn the page and get right back to work.”

Believe it: The Suns, 40-1 longshots to win it all when this season started, are now according to FanDuel the overwhelming favorites to be NBA champions.

Booker has spent six years with the Suns, more than any other player on the roster. He was there for all the losses — “the bottom of the bottom,” he said. From the start of his rookie season in 2015 to the start of the bubble last year, Booker played in more losses than anyone in the NBA, 233 of them in all. He played in 101 wins in that span; 285 other players during those years enjoyed more victories.

There were many moments that led to this. Drafting Booker and Deandre Ayton. Hiring Williams as coach. Landing a superstar like Chris Paul in a trade, signing Jae Crowder as a free agent after his NBA Finals run with Miami last fall. If any or all of those don’t happen, this finals run doesn’t happen.

But the biggest break of all was the bubble.

The Suns were sent to Lake Buena Vista, Florida last summer as the longest of playoff longshots. They were 13th in the Western Conference, but only six games back of the No. 8 spot when the season was suspended for the pandemic. The NBA, for whatever reason, decided six games was the reasonable standard for whether a team should be brought to the bubble or not. The Suns didn’t make the playoffs in the bubble, but Williams knew the league was looking at his team differently when that eight-game run was over. So, he started thinking big. Real big. This big.

“I didn’t know we would be here, but that’s what we were working for behind the scenes,” Williams said. “I’m not one to make predictions or anything like that, but when you have Chris and Book and then you add Jae and the leadership and the growth of our team, and everything that (owner) Robert (Sarver) has given us, you thought, ‘If things go our way, we could have a shot at competing.’

“I certainly didn’t know we were going to get here, but I was crazy enough to think about it, for sure, because I think that’s what everybody plays for.”

Williams might have allowed himself a few moments of fun when the West was won on Wednesday night. He also revealed that he spent part of the day crying, emotions just bubbling out of him. And the scene in Phoenix when the team returned from Los Angeles was raucous, joyous, a tiny precursor to the party the Suns hope to have in a couple weeks.

Those bubble seeds have blossomed.

The Suns are in the NBA Finals. The bottom of the bottom isn't where they hang out anymore.

“It’s hard to describe,” Williams said. “You’re just grateful for it, and we know we have more work to do.”