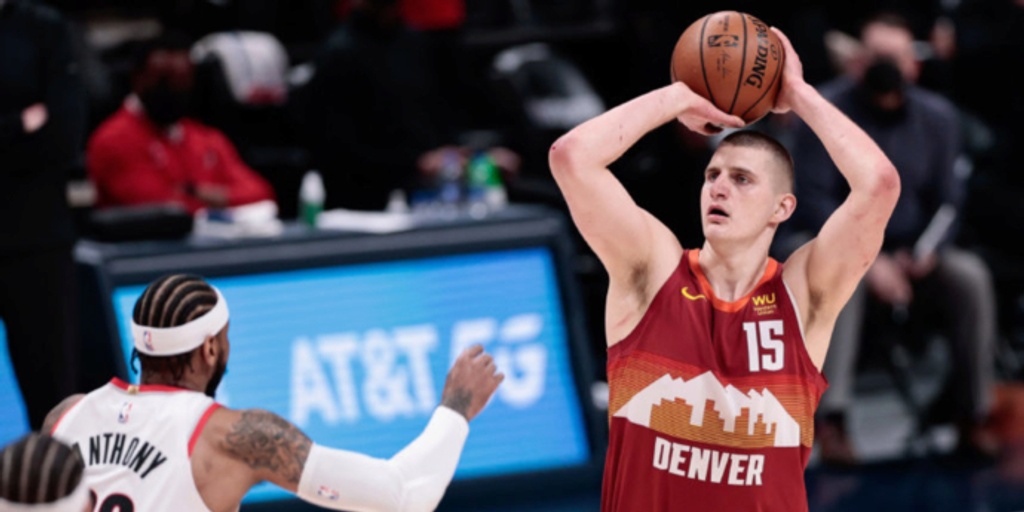 Nikola Jokic scored 38 points to overcome a 3-point shooting barrage from Damian Lillard and the Denver Nuggets evened the first-round series by beating the Portland Trail Blazers 128-109 on Monday night in a chippy Game 2.

Jokic also had eight rebounds and five assists, which was four more than he had in Game 1 when the Blazers made sure the big man didn’t beat him with his pinpoint passing.

The Nuggets had few answers for Lillard early on as the dynamic playmaker scored 32 of his 42 points in the first half. His eight 3-pointers before intermission tied an NBA playoff record for most in a half. Lillard finished 9 of 16 from 3-point range.

Game 3 will be Thursday in Portland.

It was a physical affair, with four technical fouls being issued (three on Denver, including one on Jokic) and two flagrant-1 calls (CJ McCollum and Carmelo Anthony).

Up by 20 points midway through the fourth quarter, the Nuggets withstood a mini-rally from Portland before Facundo Campazzo sealed the win with a 3-pointer. Monte Morris also had a big block on Lillard.

Michael Porter Jr. found his rhythm and finished with 18 points. He was 3-of-6 from 3-point range after going 1-of-10 from long distance in Game 1.

The usually sure-handed Blazers committed 20 turnovers. They also were outscored 54-32 in the paint.

While Lillard lit it up — and McCollum added 21 — the Nuggets kept Anthony and Anfernee Simons in check. They hurt the Nuggets coming off the bench in the series opener.

The game turned physical early in the first, with Jusuf Nurkic and Jokic getting tangled up and Jokic falling to the floor. At the next timeout, the teams started jawing near midcourt, leading to technical on Porter and Portland assistant coach Nate Tibbetts.

The tempers escalated as Anthony pushed Jokic down and drew a flagrant-1 foul. Just when things began to settle down, Morris picked up a technical right after the halftime horn. Lillard shot the free throw to start the second half.

Trail Blazers: Nurkic fouled out on a charge with 9:58 remaining. The Blazers unsuccessfully challenged the play. ... Lillard's eight 3s matched the mark for a half held by Toronto’s Vince Carter, who hit that many in the first half against Philadelphia on May 11, 2001. ... Lillard had 10 assists.

Nuggets: G/F Will Barton (right hamstring) missed his 15th consecutive game. ... G Jamal Murray once again played the role of enthusiastic cheerleader on the bench as he recovers from a torn ACL.

The Blazers took a 1-0 series lead last season on the eventual NBA-champion Los Angeles Lakers, before losing in five games.

Nuggets coach Michael Malone said there’s not a balance he likes to see from Jokic in regard to shooting or facilitating with his passing.