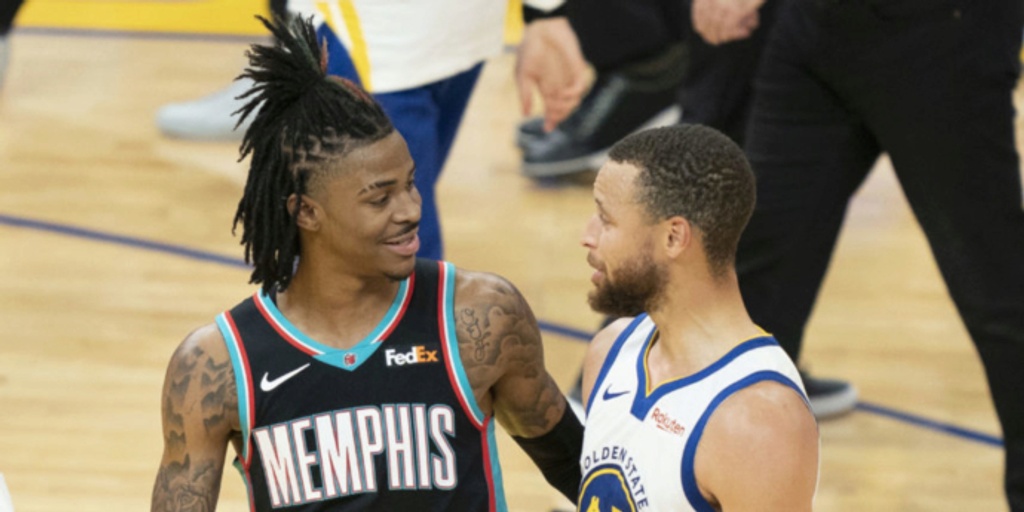 Stephen Curry has no concerns about his Golden State Warriors bouncing back quickly from the sting of losing to LeBron James and the defending champion Lakers in their first play-in game. He's seen his teammates do it for the past month just to put themselves in this position.

And there's no choice now if Golden State wants to get back to the playoffs, with a familiar, hungry Memphis team standing in the way.

“It is a win-or-go-home scenario,” Curry said. “We've had a high confidence and put together a string of wins and then had a tough loss and had to bounce back. So we've been there.”

Warriors coach Steve Kerr is counting on veteran stars Curry and Draymond Green guiding Golden State after an emotional 103-100 defeat Wednesday at Los Angeles and coming through against Memphis on Friday night in another high-stakes game at home, where this group went 6-0 to end the regular season.

It's the Grizzlies coming with some momentum after they eliminated the San Antonio Spurs 100-96 in the first Western Conference play-in game Wednesday night.

“Our plan is to pack for a three-game road trip," Grizzlies guard Ja Morant said.

The Warriors came out on top during the last meeting between these teams, beating Memphis 113-101 at Chase Center in the regular-season finale Sunday that determined the play-in tournament seeding.

So, Curry and Co. will now host the Grizzlies for the second time in six days vying for a spot in the playoffs. This time the winner moves on and the loser heads home for the offseason.

“I think it will be very challenging. It’s pretty much playoffs, everybody’s trying to win, everybody’s going to play their hearts out,” Golden State’s Juan Toscano-Anderson said. “This is a good team.”

Curry wants the Warriors to enjoy this opportunity, even if Golden State hasn't been to the playoffs since losing the 2019 NBA Finals to Toronto in the franchise's fifth straight trip.

“It'll be nice to be at home in front of our fans, take advantage of the moment,” Curry said. “Just have fun with it, don't put too much pressure on yourself thinking you've got to be perfect, you've got to make every shot.”

The Warriors have thrived with contributions from the backups.

“We've still got an opportunity to get in there and still make some noise," Warriors guard Kent Bazemore said. “It's great, we get another crack at it, we get another chance to sharpen some things up and continue to build. We've got as much basketball in front of us as we want at this point.”

Grizzlies guard Dillon Brooks fouled out with 6:12 left when these teams played Sunday after starting the fourth quarter with an 8-0 run all by himself. Brooks was disappointed by a couple of silly fouls earlier in the game. He finished with 18 points.

Against the Spurs, he stayed out of foul trouble and scored eight straight points as the Grizzlies grabbed the lead for good and finished with 24 points. Memphis is 37-14 over the last two seasons when he scores 20 or more points.

TAKING CARE OF THE BALL

The Warriors' miscues in the third quarter Wednesday proved costly: eight of their 20 turnovers came in the third and changed the momentum.

Kerr said the Warriors lost the game in the third quarter, when Golden State got sloppy. “I didn’t even think our turnovers were forced, we just made careless decisions with the ball.”

The Grizzlies ranked second in the NBA by scoring 18.5 points per game off turnovers and led the league with 9.1 steals a game. Spurs coach Gregg Popovich complimented the Memphis defense under coach Taylor Jenkins' watch.