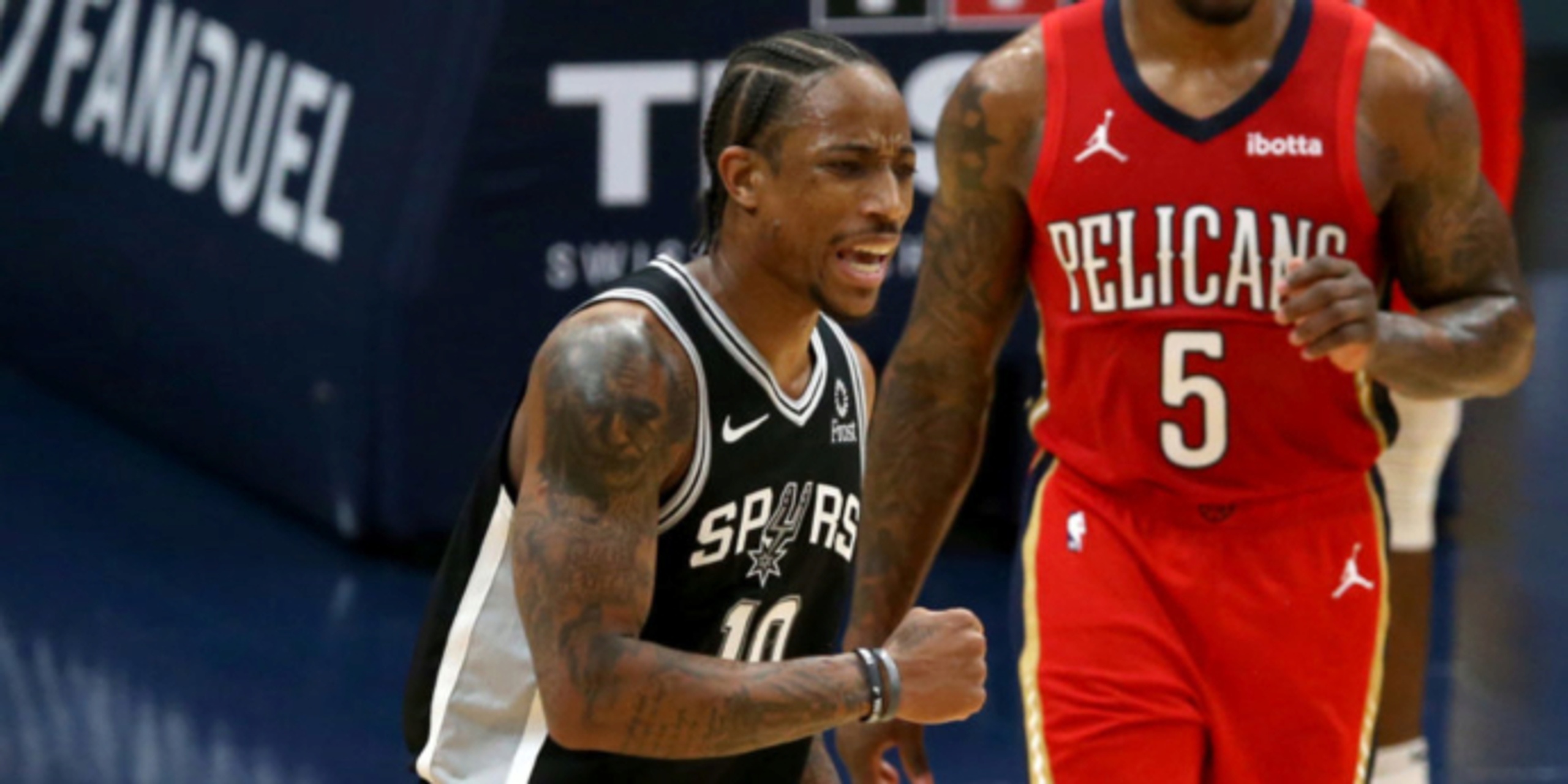 DeMar DeRozan scored 11 of his team-high 32 points in the final 7:40 and made all 12 of his free throws in the San Antonio Spurs’ 110-108 victory over the New Orleans Pelicans on Saturday night.

Another 30-piece for @DeMar_DeRozan tonight 🔥

With the Spurs clinging to a 104-103 lead with 2:04 left, DeRozan scored the next four points, and the Pelicans could not respond.

DeRozan played an outstanding floor game despite being limited with a right quad contusion that nearly prompted coach Gregg Popovich to hold him out of the game.

“There was no doubt I was going to play,” DeRozan said. “It’s really sore, but I’ve played with worse. It feels fine. I’m glad I didn’t get hit on it again.”

The Pelicans damaged their chances by committing 19 turnovers and going 17 of 32 from the foul line. San Antonio made 27 of 32 free throws.

“I think even with that the opportunities were there,” Pelicans coach Stan Van Gundy said. “We had some defensive rebounds down the stretch that we couldn’t get. (But) the free throws and turnovers made it a close game. We shot the same number of free throws that they did and they made 10 more. That’s going to be tough to overcome.”

Derrick White added 22 points for the Spurs, hitting four 3-pointers. White also blunted a Pelicans rally by blocking a layup attempt by 7-foot center Jaxson Hayes, which led to a lane jumper by DeRozan that ignited his 11-point run in the final 7:40.

Popovich marveled at DeRozan’s stamina and resilience in playing through bumps and bruises.

“He seems to never get tired, and he’s always ready to go,” Popovich said. “He wants the ball, he wants to score, but he’ll get it to his teammates if that’s appropriate. He loves being in that situation. He’s the best on our team with that.”

Zion Williamson led the Pelicans with 33 points and 14 rebounds, and Brandon Ingram had 24 points, six rebounds and six assists. Wiliamson had the shaky foul-shooting bug, going 7 of 13 on free throws.

“They hit tough shots and made free throws, and some of those rebounds we need to get — we didn’t get them,” Williamson said. “It’s as simple as that. It is frustrating a little bit, because those are things we can change. All I can say in that is take the lesson, learn from it and try to get better.”

After taking just one shot in the second quarter, Ingram took nine shots in the third quarter and made five, scoring 11 points to help New Orleans cut it to 85-84. The Spurs were 1 of 8 from long range in the quarter and were outscored 34-28.

Spurs: F Rudy Gay sat out with a back injury. … The Spurs went to a zone defense in the final three minutes and frustrated the Pelicans. … Coach Gregg Popovich said C Jakob Poeltl, who had five blocks, has been a defensive anchor. “We would be in bad shape defensively it it weren’t for Jakob Poeltl,” he said. “That’s not an overstatement. That’s not an exaggeration. I’m not trying to pump him up or anything. It’s a fact.”

Pelicans: Williamson reached the 2,000th-point mark in his 79th game, the 10th fastest in NBA history, tying him with Rick Barry and Elgin Baylor. … The Pelicans dropped 4 1/2 games behind San Antonio for 10th place in the Western Conference, the final play-in spot. The Spurs also hold a 2-1 series edge on New Orleans. … Coach Stan Van Gundy said G Nickeil Alexander-Walker (high ankle sprain) is escalating his physical activity and may return for the final 10 days. … G Josh Hart (finger surgery) is behind that pace,

Spurs: At Washington on Monday night.