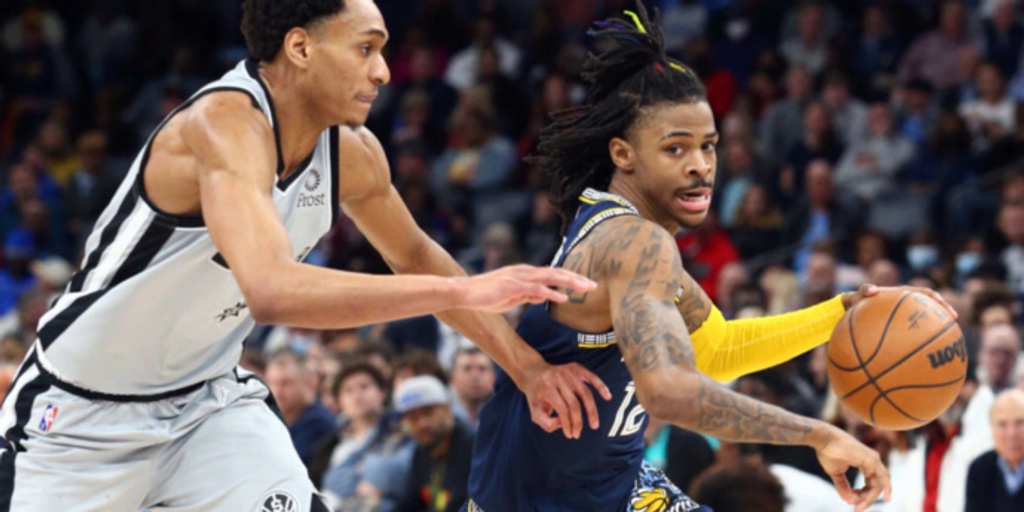 The arena was still buzzing from Morant's fast-break slam late in the second quarter when Steven Adams delivered a length-of-the-court pass to Morant, who knocked down a buzzer-beater from the left baseline for a 68-58 halftime lead.

Morant added 13 consecutive points during the fourth quarter to break the game open, following up a career-best 46 points in a win Saturday at Chicago by connecting on 22 of 30 from the field. He hit all four 3-point tries as Memphis won its second straight.

Lonnie Walker IV led the Spurs with 22 points, and Dejounte Murray added 21 points and eight assists before being ejected late in the fourth quarter. Poeltl finished with 16 points and 10 rebounds.

The Spurs loss left coach Gregg Popovich one game short of tying Don Nelson for the most regular-season wins by an NBA coach.

The Grizzlies built the lead to 13 early in the fourth, their largest of the game at that point, but the Spurs were within 104-99 near the midway point of the fourth. That’s when Morant scored 13 straight.

Spurs: G Doug McDermott, listed as questionable with right knee soreness before the game, was available. ... San Antonio went 4-4 on its annual Rodeo Road Trip. ... Walker came off the bench and scored 11 points in six minutes of the first quarter. ... Poeltel and Keldon Johnson, who sat out Saturday’s loss to the Heat with lower back soreness, returned to the lineup.

Grizzlies: F Brandon Clarke, who was listed as questionable with a left eye abrasion, was available. ... Have won five straight over San Antonio. ... Adams had 14 rebounds.

Grizzlies: Travel to Boston to face the Celtics on Thursday.