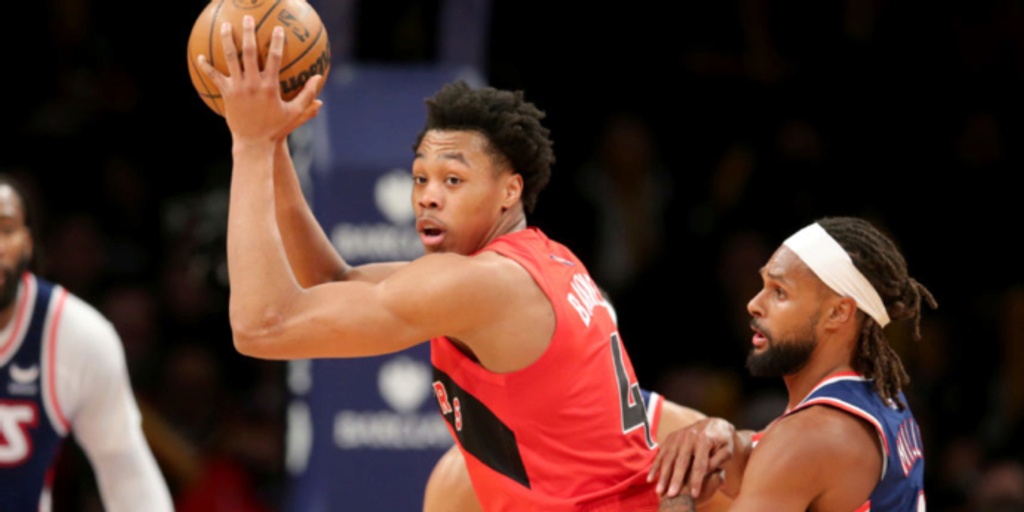 Scottie Barnes made his first 11 shots and had 28 points and a season-high 16 rebounds, leading the Toronto Raptors to a 133-97 victory over the Brooklyn Nets on Monday night in the opener of a home-and-home series.

Blown out by Charlotte and Atlanta in their first two games after the All-Star break, the Raptors were on the good side of a romp against a Nets team that was missing their best players, their coach and apparently anyone who could guard Barnes.

The forward was 10 for 10 at halftime, the first rookie to be perfect on 10 or more shots in a half since Derrick Rose on March 18, 2009, according to the Elias Sports Bureau. The Nets finally stopped the No. 4 pick when James Johnson blocked his shot with 7:08 left in the third quarter.

By then, Barnes was on the way to matching his highest-scoring game on a night Toronto led by as many as 39 points.

Precious Achiuwa had 20 points and eight rebounds for the Raptors, who played without All-Star guard Fred VanVleet because of a sore right knee. VanVleet replacement Malachi Flynn scored 18 points.

The teams play again Tuesday in Toronto, which the Nets hope will be their last game without Kevin Durant, who is expected to return soon after missing the last 20 games with a sprained left knee ligament. Kyrie Irving and Ben Simmons were also out for the Nets, and coach Steve Nash was placed in health and safety protocols shortly before the game. Assistant Jacque Vaughn ran the team in his place.

The Raptors moved three games ahead of the Nets for seventh place in the Eastern Conference. The No. 7 seed hosts No. 8 to open the play-in round, with the winner of that game earning the No. 7 seed. No. 8 hosts the winner of the 9-10 game for the No. 8 seed.

The Nets never envisioned having to worry about that, but it looks increasingly likely after their 14th loss in 17 games. LaMarcus Aldridge scored 15 points, while Cam Thomas and Bruce Brown had 14.

Brooklyn was coming off a victory at defending champion Milwaukee on Saturday, with Irving scoring 38 points. Irving was unavailable again at home Monday because he hasn't met New York City's vaccine mandate, nor will he be able to travel to Toronto.

Nash said before the game he has not had any new talks with Irving about getting the shot.

Nets: Vaughn coached the Nets at the end of the 2019-20 season after Kenny Atkinson was fired in early March. He guided the Nets to the playoffs, where they were swept by the Raptors in the first round at Walt Disney World, shortly before Nash was hired.

Nash, who held his news conference before he was ruled out, said he doesn't think Simmons will practice this week after being bothered by back pain. He hasn't been cleared for any high-intensity work, making it unlikely the former 76ers star will be ready when the Nets visit Philadelphia on March 10.

Goran Dragic's second game with the Nets was against the Raptors, who had acquired him last summer in the deal that sent Kyle Lowry to Miami. Dragic played in just five games for the Raptors before they dealt him before the trade deadline to San Antonio. The veteran guard agreed to a buyout and signed with the Nets last week.

Nurse said coaching against him was no big deal.

“Listen, I think he’s happy where he’s at now and guys in that stage of their career, it’s not uncommon,” Nurse said.

The Raptors will be allowed to play in front of full capacity on Tuesday after being limited to 1,000 fans when they were last home on Feb. 12.

“It hasn’t been that great for our team or even our opposition coming in, the low energy that's been in that building with no one there,” Nurse said. “So especially for a place that’s full of energy, it’s a super-fun place to be when we do have funs and all that stuff, so we’re certainly looking forward to that.”