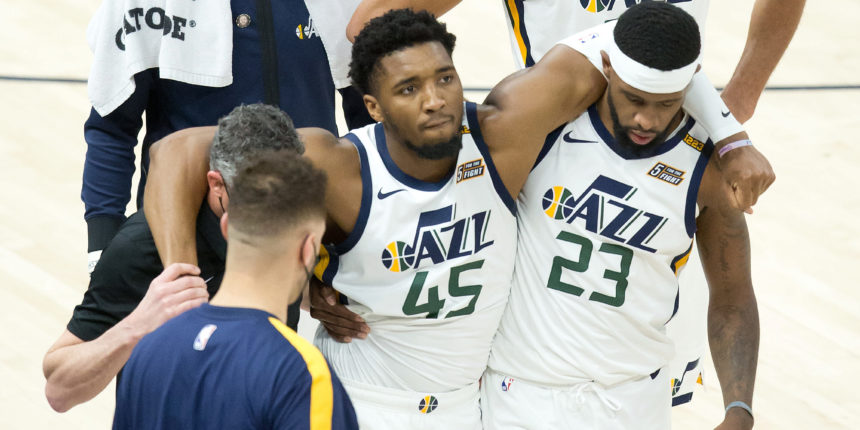 The NBA-leading Jazz rallied to beat the Indiana Pacers 119-111 on Friday after Mitchell the left game with a sprained ankle in the second half. He scored 22 points on 7-of-15 shooting before spraining his right ankle with 8:18 left in the third quarter.

Mitchell could not put any weight on his leg, and teammates helped him off the floor to the locker room. X-rays on the ankle were negative, and he was scheduled to undergo an MRI on Friday evening.

Without Mitchell on the floor, the Jazz clamped down defensively to win their second straight game. Utah allowed Indiana to score on only 10 total possessions over the final 15 minutes.

“It’s always tough to see one of your guys go down. Donovan, in particular, is so important to our team,” point guard Mike Conley said. “He’s what makes us go. ... I was proud of the way we responded with Donovan going down.”

The Jazz erased a double-digit deficit and tied it at 89 heading into the fourth quarter on back-to-back baskets from Clarkson.

Utah overtook Indiana for good with a 10-0 run, highlighted by back-to-back baskets from Bogdanovic, to take a 108-99 lead. Utah held Indiana scoreless on eight straight possessions over 4 1/2 minutes during the decisive burst.

“Everything was better in the second half and it did change momentum in the game,” center Rudy Gobert said. “It fueled our offense.”

Gobert fueled the defense with 13 points, 23 rebounds and four second-half blocks. Bojan Bogdanovic had 24 points to pace the Jazz offense. Jordan Clarkson chipped in 18 points off the bench while Conley had 10 points and 10 assists.

Domantas Sabonis had 22 points, 15 rebounds, and seven assists for the Pacers. Caris LeVert scored 24 points and Malcolm Brogdon added 16. Indiana led by as many as 17 points in the first half but lost for the second time in its last six games.

Utah’s perimeter offense came to life after halftime which, combined with improved defense, made it tough for the Pacers to not lose ground.

The Pacers built their largest first-half lead at 53-36 midway through the second quarter when Goga Bitadze capped a 9-0 spurt with a dunk.

Indiana shot 51% from the field in the first half and made seven 3-pointers.

“We were just making shots,” Sabonis said. “Maybe the ball moved a little bit more in the first half but mainly we just made our shots.”

Utah cut the deficit to 63-56 in the final minute before halftime on a layup from Mitchell. But the Jazz then gave up two 3-pointers in the final 4.7 seconds of the half. Brogdon drained one, and then LeVert stole an inbound pass from Royce O’Neale and sank an uncontested corner 3 before the buzzer.

“We didn’t have a requisite level of aggressiveness,” Jazz coach Quin Snyder said. “There’s just a level of urgency you have to have."

Pacers: Doug McDermott missed his second straight game and Myles Turner missed his sixth in a row. Both players are recovering from left ankle sprains. ... Indiana outscored Utah 12-0 in fast-break points during the first quarter. ... The Pacers gave up only three points off 10 turnovers.

Jazz: Derrick Favors sat out with left knee soreness. ... Utah made seven 3-pointers in the third quarter after making six total in the first half. ... Gobert had his fifth game this season with at least 20 rebounds.

Three-time NBA champion and 13-time all-star Dwyane Wade purchased an ownership stake with the Jazz, the team announced on Friday. Wade played in the league from 2003 to 2019, primarily for the Miami Heat, and has functioned as an off-the-court mentor for Mitchell.