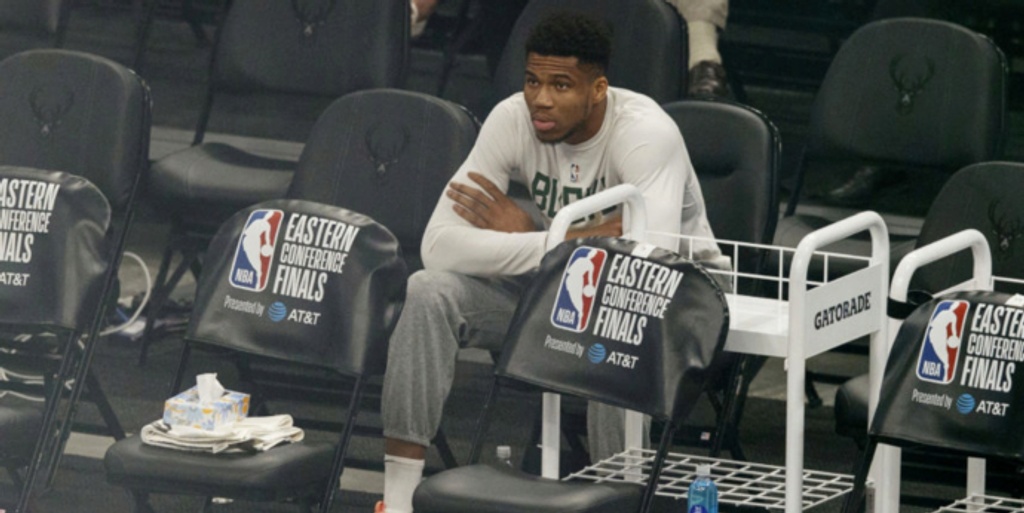 The Milwaukee Bucks proved they were good enough to wrap up the Eastern Conference finals without their best player.

Now the Bucks face a quick turnaround before Game 1 of the NBA Finals at the Phoenix Suns on Tuesday night. It's not known if that leaves Giannis Antetokounmpo sufficient time to recover from his hyperextended left knee that prevented him from playing in the final two games of the series against the Atlanta Hawks.

“We’ll update it when appropriate. The conversations between he and myself, it’s kind of private and we’ll see where he is each day.”

Budenholzer said he was impressed with the resiliency the Bucks showed in winning back-to-back games without Antetokounmpo, the two-time MVP.

Khris Middleton, who stands with Antetokounmpo as the veteran leaders on the team, scored Milwaukee's first 16 points of the second half and led the Bucks with 32. Jrue Holiday added 27 points, nine assists, nine rebounds and four steals.

Antetokounmpo remained on the Bucks' bench and was so animated, sometimes moving onto the court as he communicated with his teammates, that Budenholzer said he feared the star might draw a technical foul.

Holiday said the players were inspired to win for their star who could not be with them on the court.

“Have his back,” Holiday said. “I mean, Giannis is a one-of-a-kind guy. We obviously all see his basketball talent, but as a human being he’s one of a kind. ... In my opinion, one of the biggest things we did the last two games was play for him, have his back and hold the fort while he was out with an injury.”

Holiday added that clinching the spot in the finals without Antetokounmpo “shows we are a true team.”

The reward is Milwaukee's first berth in the NBA Finals since 1974. Milwaukee won its lone title in 1971 and lost in the finals in 1974.

Antetokounmpo was the center of the Bucks' efforts to build a championship contender. Not having him on the floor took a little something out of the celebration.

“There’s a bittersweetness to him not being able to play these last two games,” Budenholzer said.

The Bucks listed Antetokoumpo as doubtful before announcing he would not play. For the second consecutive game, Bobby Portis started in the forward's spot.

“I definitely wish he was out there with us, but he’s still here with us,” Middleton said. “On the bench, talking to us during the game, he’s still a part of it.”

The Bucks were in the playoffs for the fifth consecutive season. They fell short of the NBA Finals the last two seasons despite posting the NBA's best regular-season record both times.

Antetokounmpo and Middleton are the Bucks' veteran leaders who experienced the disappointment of falling short in the postseason the last two years.

“Honestly, it’s been a long journey, but it’s been a great journey,” Middleton said. “It’s worth it.”

The Bucks led only 47-43 following a sloppy first half before Middleton took over to open the second half Saturday. He scored the first 13 points following halftime, including two 3-pointers, stretching the lead to 60-43. Following a basket by Atlanta's Trae Young, Middleton answered with another 3.

It was the leadership the Bucks needed to reach the Finals without their biggest star.

“It just shows the guts of our team,” said P.J. Tucker.

The players wore NBA Finals caps following the game but no champagne flowed in their locker room.

“Nope,” Tucker said before explaining: “We ain’t did nothing yet.”