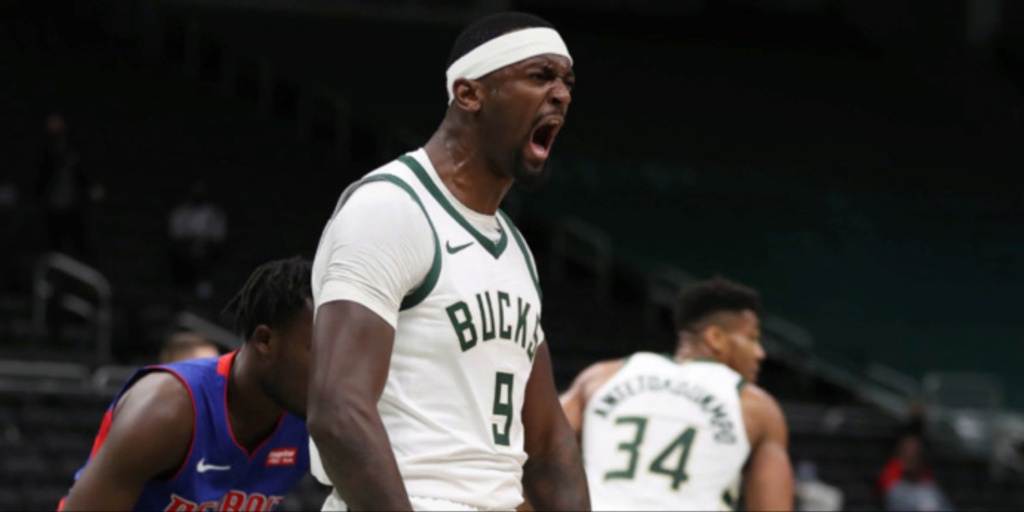 Bobby Portis is the Bucks' spark plug: 'I’ve been having a lot of fun this year'

Before the team’s win on Friday, Milwaukee Bucks head coach Mike Budenholzer joked that if they didn’t play well, he’d tell Giannis Antetokounmpo that he won’t be needed against the Cleveland Cavaliers. The tongue-in-cheek comment stemmed from the teams’ first meeting on Jan. 9, a 100-90 victory with the Greek Freak sidelined by a back injury at the time.

That night, Bucks newcomer Bobby Portis made his first NBA start since Feb. 27 of last year and delivered a 17-point, 11-rebound, 4-steal performance that pushed Milwaukee to a win. Fast forward to Friday night, he was back in his regular role off the bench, yet he still made just as big of a difference.

Facing some unusual travel problems heading into the game, Giannis and the Bucks’ starters came out flat against the sneaky Cavs. Trailing in the game by seven points early in the second quarter, Portis strung together eight straight points off a jumper, floater and finishes in traffic. It was a stretch that revved an engine that hadn’t been able to turn on. From then on, Milwaukee’s offense began to hum.

“He’s great for our team. I think his teammates love him. He plays with a great passion, with a great edge,” Budenholzer said following the 123-105 runaway over the Cavs, whom Milwaukee plays again Saturday on a back-to-back. “I think we need that. It’s been fun. Everybody believes in him, trusts in him. They know that he’s gonna give us a big impact. His personality, his edge have all been a great addition to our group.”

What Portis did against Cleveland (for the second time) is hardly a flash in the pan. This has been a theme all season. The veteran forward is starring in his particular role with the second unit, averaging 19.1 points and 12.5 rebounds per 36 minutes. He is purposeful with every attempt and crashes the boards hard every night on both ends, and it fires his guys up.

“I think the last three, four years of my career, I’ve kinda found the niche of coming in and bringing energy off the bench,” Portis said after Friday’s win. “Just knowing if the game’s up and down or if our team needs energy, being that sparkplug that the team needs. Just going out there and playing as hard as I can, taking the shots that’s given to me and being aggressive with it. I think I’ve done a good job of that.

“I’d seen [Friday] that we were kinda sluggish early on, and I knew that our team needed some energy. When I sit on the sideline and I see what’s going on, I always tell the other four guys that’s coming in with me, ‘It’s one of those nights, we gotta be ready y’all.’ I always try to just talk to the guys and just try to come in and play with some swag.”

Portis tries to stay consistent in everything he does in life. His daily routine isn’t anything out of the ordinary: sleep, wake up, go to shootaround, watch film, nap. There is no feeling of whether he’s going to have a better game than the others or vice-versa because he sticks to his regimen regularly.

To prepare for his upcoming matchups, Portis relies on studying up specific schemes a particular team will throw at him one day before that game as well as the 4 or 5-man he’s up against and his tendencies, plus whether he’ll see more drop coverage or switching. It’s a method he credits to one of his former coaches with the Chicago Bulls (and a former player himself), Pete Myers, and it’s stuck with the 25-year-old ever since.

According to InStat, the Bucks’ second-most used five-man lineup consists of D.J. Augustin, Jrue Holiday, Khris Middleton, Giannis and Portis. The combination has played over 47 minutes together and is scoring 124 points per 100 possessions on 53 percent from the field, including an astounding 55 percent mark from long distance.

We know that Giannis is going to positively affect every lineup because that's what a reigning back-to-back MVP does. But when you look at how Portis plays with Augustin and Middleton, whether in a two-man game with each or otherwise, it truly stands out. Per NBA.com, the trio has a plus-13.2 net rating in 160 minutes and the highest offensive rating on the team.

“They’re three great players,” said Donte DiVincenzo, who recorded a career-high 11 rebounds Friday in Cleveland. “I think Bobby has a great knack for finding his spots and being able to be efficient in where he gets the ball. We were joking on the bench, I feel like he never misses a shot."

(As specified by InStat, Portis is 19-for-22 on cut shots and boasts a 63.7 true shooting percentage overall.)

“Then you have D.J. Augustin, he loves to create for other people. When he’s aggressive, guys are gonna get open shots,” DiVincenzo continued. “And then you go to Khris, Khris does what Khris does. He’s an All-Star player, he’s one of our leaders and when you put the pressure on him, to make plays and make other guys better, he’s gonna step up and do that.”

Portis agrees wholeheartedly with his teammate, citing Augustin and Middleton’s willingness to pass the ball and make the right plays.

“If I get in the pocket and find the right angles, they’ll get it to me. On this team, we have a lot of guys that can shoot the basketball at a high level, at a high clip. So now if I catch it in the post, there’s not too many double teams,” Portis said. “The last three, four years when I caught it in the post, they would ODB me from the top. I would get trapped and stuff like that. So it’s kinda easier for me now to get in a rhythm.

“I know when I’m coming in the game and know when I’m coming out, so it’s kinda easier to play my minutes with force. It’s kinda better that way as well, knowing that on a night like [Friday] I’m gonna come in at the five-, six-minute mark. I know if our team needs some energy, I can come in and do that, and I think that’s fun playing that way."

Portis seems to appreciate the structure Budenholzer and the Bucks are providing him, and why wouldn’t he? It’s turned out to be a career-year so far for a player who’s proven that some of us forgot about him way too soon, and at this pace, he’ll keep sending loud reminders of why he’s always deserved better.

“Obviously, it’s always fun playing this game. It’s a beautiful game if you play it the right way, and I’ve been having a lot of fun this year,” Portis said.

“I think if you ask anybody about me, I’m the same person every day of my life. I don’t know no other way to be. All I know is to be Bobby Portis. I can’t fake the funk. I’mma go out there every day, be who I am, play hard, make the right play. Just play with an edge, play with a swag, play with energy. That’s who I’ve been my whole life, and I’m gonna continue to be who I am. I don’t know how to be any other way.”