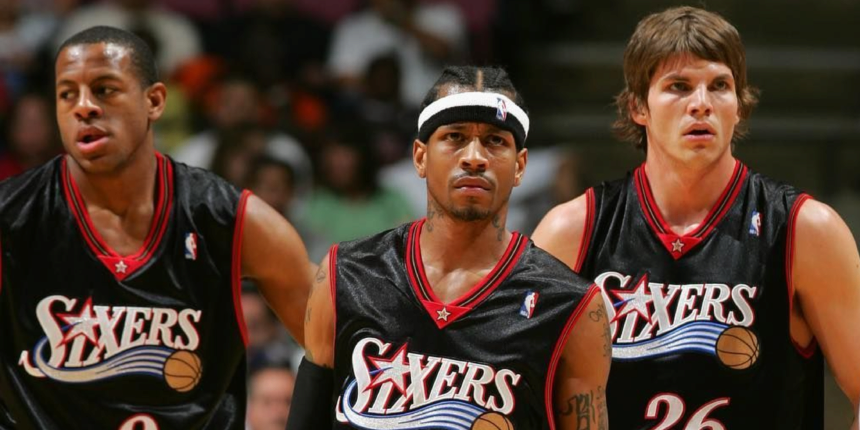 Anyone born after 1995 probably knows less about Allen Iverson, but watching him play was truly magical for those who had a chance to follow the best days of his career. Iverson was the first small player since Isiah Thomas to dominate the league, and he took the NBA by storm with his famous crossover move on prime Michael Jordan.

In the years after, Iverson continued to use his otherworldly physical gifts to be a threat on both ends of the basketball court, turning the Philadelphia 76ers into a contender for the first time in over fifteen years.

Stories of Iverson’s athletic gifts are well-documented. From his time playing football in high school to his successful careers in prep and college hoops, A.I. was quick with long arms and as agile of a human being as one has ever seen. JJ Redick had Kyle Korver on his podcast, and the two talked about their experiences playing with Iverson, to which Korver recalled how The Answer helped a young shooter find his way.

“If you couldn’t shoot it, Allen wasn’t passing you the ball. So when I came in he always had his arm around me, telling me to shoot it," Korver said on The Old Man and The Three.

JJ Redick had another story to add of Iverson playing away from the cameras, which not many people were aware of.

“We had training camp one day and Allen came in rather tardy… Then he played for the first how many minutes of live basketball, wearing just his socks," Redick said with a laugh.

Allen was an amazing athlete, but to play basketball against NBA players and dominate in just your socks is incredible. This is a testament to Allen’s quickness and agility. He was so light on his feet that he could scrimmage in just his socks.

The Answer may have retired with zero rings, but he was undoubtedly one of the biggest basketball icons of his generation. Kobe might have won more rings, but Iverson got kids to start wearing arm sleeves, ankle socks, and baggy shorts because of how his style of play captivated the hearts and minds of young basketball fans.

Iverson was one of the greatest of all time, as he had the mystique of these types of instances in the same way that Jordan, Bird, and Kobe did. If you still have doubts about Iverson’s immense talents, try playing a game of basketball in just your socks.