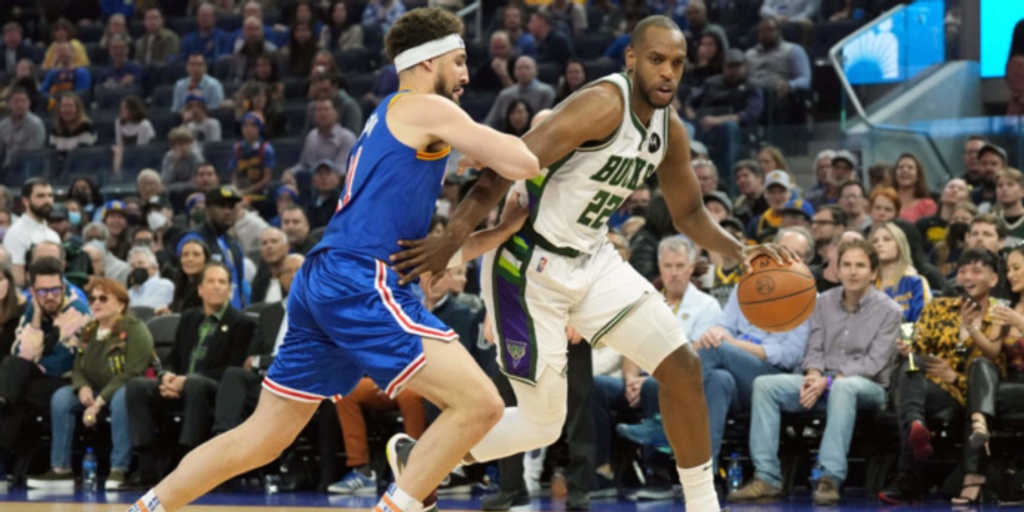 Thompson had his second 30-point performance since returning Jan. 9 from a two-year absence following knee and Achilles surgeries.

Giannis Antetokounmpo had 31 points and eight rebounds, but the Warriors’ defense held the rest of the Bucks down. Milwaukee had won six a row.

This was a bad night for Milwaukee on the injury front.

New forward DeAndre’ Bembry, only signed last month when the Nets waived him, injured his right knee and was helped to the locker room with 2:31 left in the third quarter. He went down hard along the sideline leaping to defend Poole's 3-point attempt.

Serge Ibaka received stitches in the first half for a right eye laceration after he was injured in the opening quarter. He didn’t return, scoring 11 points over nearly 9 minutes.

Andrew Wiggins added 21 points, six rebounds and four assists for the Warriots. Poole started for just the second time in the past 13 games and shot 9 of 16, while Stephen Curry had eight points and eight assists taking just seven shots.

Golden State held Milwaukee to 42.9% shooting in the first half including 3 of 11 by Khris Middleton, who wound up with 18 points on 6-for-19 shooting.

Second-year center James Wiseman will play his second game with the G League Santa Cruz Warriors at home in the Chase Center on Sunday, and coach Steve Kerr can't wait to catch it live.

Wiseman, who has been out all season recovering from right knee surgery, also played Thursday at Stockton and scored 18 points on 7-for-13 shooting to go with six rebounds in Santa Cruz's 109-99 loss.

“I was so happy to see him the other night,” Kerr said. “I watched the tape and he just looked happy. It looked like he was excited and moving well. It's been a long 11 months for him. Thrilled for James that he's back on the floor. He deserves it.”

WIGGINS AT THE LINE

Kerr spoke to Wiggins about his free-throw struggles of late then the All-Star made his only two Saturday.

He had been 4 of 16 from the line since the All-Star break coming into the game.

“The most important thing is this happens to everybody, maybe not Steph,” Kerr said.

Warriors: F Draymond Green, sidelined since early January with a back injury affecting his calf, is “still on pace for Monday,” Kerr said. ”He scrimmaged today." His 5-year-old son, Draymond Jr., again served as towel boy near the team bench. ... F Otto Porter Jr. missed a fourth straight game because of a seasonal illness. He scrimmaged Saturday and is expected to play Monday. “He feels a lot better,” Kerr said. ... G Gary Payton II sat out again with left knee soreness.

Bucks: At Utah on Monday night.